Another Junior B championship for Naomh Ultan 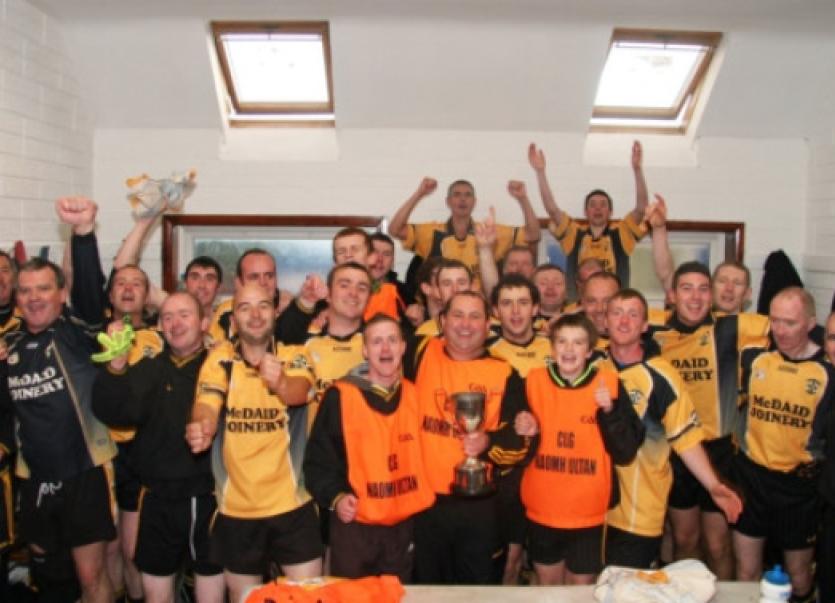 The goals, either side of half-time, were the game’s defining scores too with Furey hitting the net just before half-time to send his time 1-4 to 0-4 in front.

Man of the match Byrne was punching the air within three minutes of the restart after he pounced to drill home from close after a Liam Kennedy’s strike for a point came back off the upright.

Furey had the Letterkenny Gaels net bulging on the half hour mark and seconds after he had levelled the contest for the second time. The goal was a real boost for the winners who struggled to match the Letterkenny men for pace in the opening 20 minutes.

Naomh Ultan stuggled early on and were lucky to be just 0-3 to 0-1 down at the end of the first quarter.

Mikey Harte and Colm Breslin kicked the points in the opening 11 minutes as Letterkenny Gaels got off to the better start. But with Naomh Ultan proving more economical in the scoring stakes Sean Furey got the men in the men and black and amber off the mark on 13 minutes.

And while O’Malley scored a third for Letterkenny, who were dominating in possession, the game was tied up on 20 minutes at 0-3 each. Aaron Byrne got on the end of a good move to knock over from close range.

Nicky McGarrigle raiding from right back restored the Gaels advantage with their first white flag in just under ten minutes.

But that proved to be the ‘ Gaels’ last point of the half as Naomh Ultan and Furey took over to send the winners in three in front at the interval and the ‘Gaels rattled.

The Letterkenny men were reeling three minutes into the new half when Byrne struck for goal number two and a seven point lead 2-5 to 0-4 for Naomh Ultan.

While Alan Harrington converted two frees in the space of a minute with veteran Martin Shovlin mopping up in defence there was no way back for the Gaels. Harrington and Furey traded points and Byrne and Pat Doherty traded flags and substitute pointed for the Gaels, before another of the Naomh Ultan veterans Ronan McCallig, brought down the curtain on the scoring.

In the end it was victory for craft and experience over youth and exuberance as Naomh Ultan’s old guard guided them to victory.