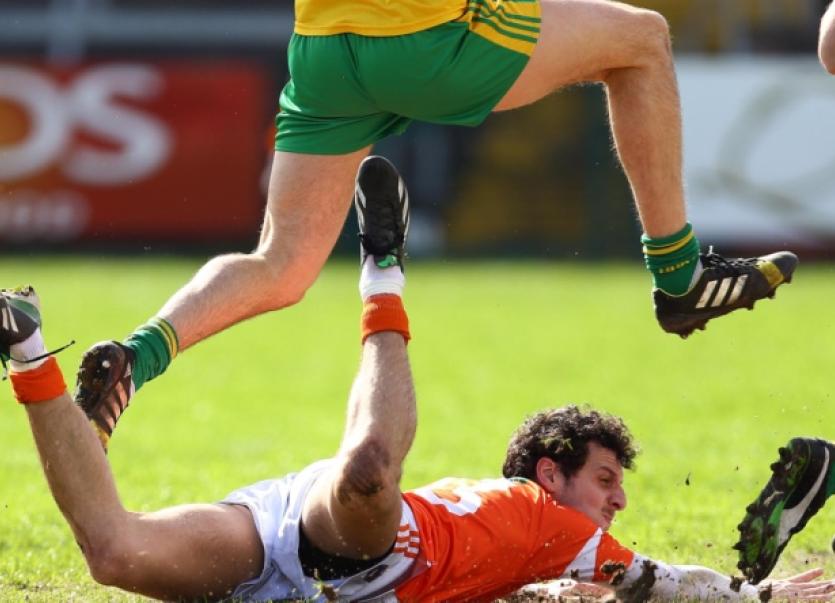 Paul Grimley might’ve made a rod for his own back in the lead-up to Armagh’s climactic Allianz League Division Two clash with Donegal.

Paul Grimley might’ve made a rod for his own back in the lead-up to Armagh’s climactic Allianz League Division Two clash with Donegal.

Grimley suggested last week that he may well find himself “under pressure” should his side slip through the relegation trap door to Division Three.

So, fast forward till Sunday evening and with Donegal having won 2-10 to 1-8 at the Athletic Grounds and Laois having overcome Down 1-16 to 2-10 at O’Moore Park, that’s exactly where Armagh have slipped.

“It’s disappointing we have been relegated, there is no-one more heartbroken than myself, but again, there is no fault to the players or the coaching or management staff,” Grimley said.

Grimley was making reference to what he believed should have been two Armagh penalties, one in each half, that were not awarded by referee Fergal Kelly.

“We had a player, Stefan Campbell, who rode two head high tackles and a free was given against him. I wasn’t happy with a whole lot of decisions,” Grimley said.

The comments left the media conducting the interview somewhat bemused.

Before they contemplate life in the third tier, Armagh must look towards their Ulster championship opener against a Cavan side that knocked them out of the province last year.

“These boys will fight as they’ve done before and show the fight they really have. They have showed it throughout this campaign.

“I’m happy enough with the performance. I’m delighted with the character and the fight they’ve shown.

“We have a fantastic team and I’ll stand by them through thick and thin. They are a good bunch and they’ll be easy to get together for the championship.

“Sometimes things galvanise you, although this wasn’t the plan.”

Grimley then distanced himself from the comments he was said to have made before the game.

“That was just a bit of banter, it gets them all excited on the wires, doesn’t it? I’m not going anywhere.”

Few from the Donegal camp agreed with the sentiments of Grimley.

“Well, you’re saying I played 148 games for Donegal, but I don’t think I would’ve been pulled or hauled as much in the other 147,” Colm McFadden said afterwards. “Maybe they were watching a different game.

“It was a tough game with a lot of pulling and dragging but I suppose from our point of view that’s what we want at this time of the year.”