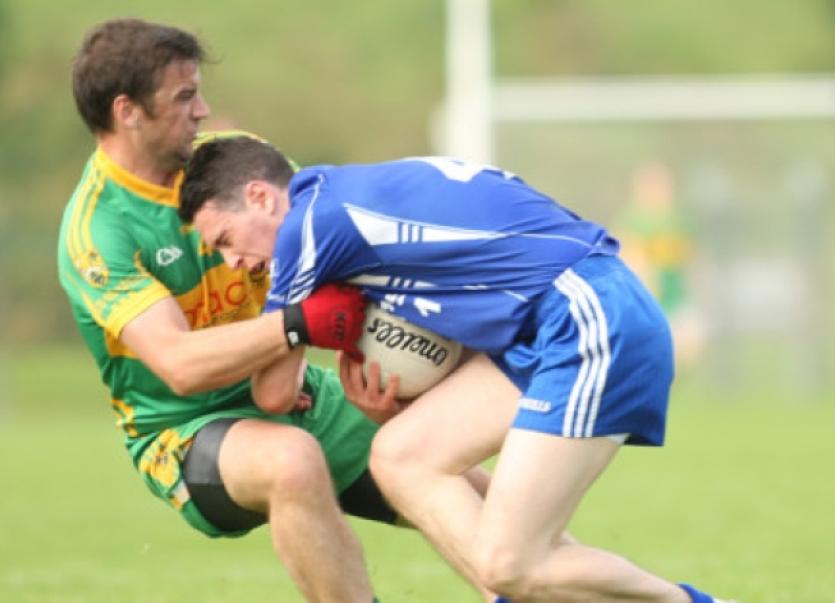 Furious Ardara fans rounded on Gaoth Dobhair referee Martin Coll as this tempestuous and at times ill-tempered affair ended in a draw at Tir Chonaill Park.

Furious Ardara fans rounded on Gaoth Dobhair referee Martin Coll as this tempestuous and at times ill-tempered affair ended in a draw at Tir Chonaill Park.

A draw was a fair result as neither side imposed themselves enough to carve out a victory, but the final three minutes ended in a welter of controversy.

The drama began after an Ardara player was fouled and referee Coll seemed to blow his whistle for an Ardara free with time almost up.

But, an unsavoury melee developed that ended with Four Masters’ Barry Dunnion and Conor Classon both getting black cards, the latter apparently for dissent.

However the Gaoth Dobhair whistler then blew for full time, and irate Ardara fans and officials were wondering why the apparent free from about 35 metres out on the right wing, was not allowed.

Referee Coll handed out two yellow cards to Ardara’s Tomas Boyle and Jamie McCrea of Four Masters, but he could have easily dished out twice as many as an unsightly free-for-all erupted.

And Masters full-back Luke Keaney was lucky not to get a yellow card after a foul on CJ Molloy was punished by just a free.

In general, the referee’s policy of letting the play flow as much as possible resulted in a few unnecessary niggles that got progressively worse as time went on.

Playing wise, this was otherwise a highly entertaining affair with both sides hitting some superb points from play.

But the wides tally of both teams also tells a salutary tale as the Masters hit ten wides to Ardara’s seven.

At the other end Paul Durcan was called upon to save a certain goal from Gareth Concarr in the 37th minute.

And Papa almost had a repeat of his Croke Park kick-out when he scuffed his kick out in the eighth minute, but Karl Lacey was on hand to tidy matters up.

Masters midfielder Barry Monaghan, Lacey and Barry Dunnion controlled matters for the first 17 minutes even though Gareth Concarr put Ardara ahead by a point after just 15 seconds.

Tomas Boyle tagged on a free for Ardara but the Masters hit some stunning points from play from Peadar Espey, Benny Byrne, Luke Keaney and Conor McMonagle.

It took Ardara a while to settle but when Kenneth Doherty and Brendan McNelis got control at midfield the scores flowed from Concarr, Kieran Breslin, Ryan Melly and Tomas Boyle.

This was a swift transformation, and suddenly Ardara turned over with a 0-7 to 0-6 interval lead.

Masters had the benefit of the slight slope in the second half and they laid siege to the Ardara goal in the opening ten minutes of the half.

With Lacey and Dunnion orchestrating matters, the chances fell to the forwards.

But five wides from very scorable positions and three kicks into the arms of Ardara keeper Declan Gallagher was their sole reward.

The tempo and tackles got much sharper, and we had real championship fare on out hands before the regrettable melees.

Scores were at a premium and both sides only managed a total of five points in the entire half.

Peadar Espey levelled matters from a 14 metre free after a fairly quiet Michael Doherty had been fouled.

Patrick Gallagher regained the lead for Ardara in the 38th minute and Ryan Melly also found the target as Paddy McGrath stopped Michael Doherty in his tracks with a superb legal shoulder charge.

But Doherty still managed to level matters for the Masters in the 55th minute.

And both sides had three great chances of sealing victory but just could not find the necessary accuracy to make that all-important breakthrough, as tempers and standards slipped.