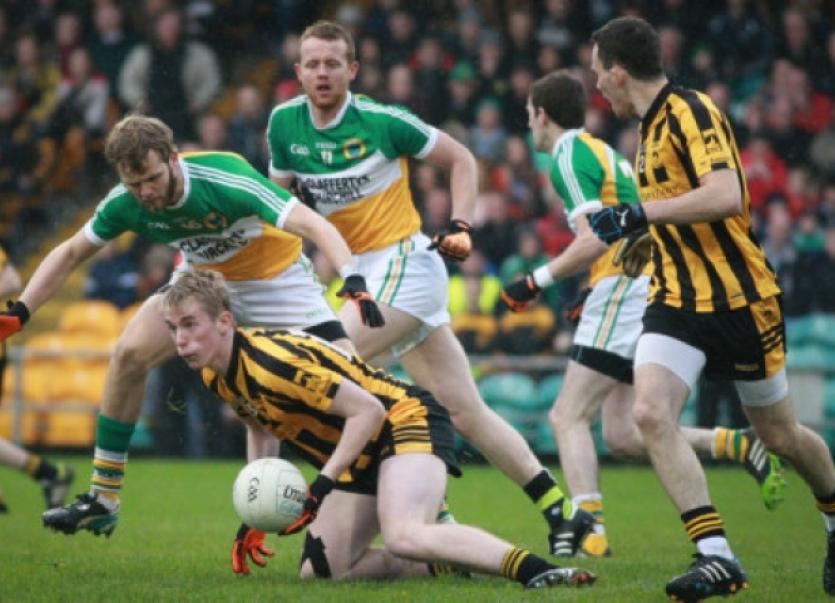 Patience, we’re often told, is a virtue and that was the deciding factor as St Eunan’s reclaimed the RTÉ Raidió na Gaeltachta SFC with a three-point win over dethroned champions Glenswilly at MacCumhaill Park yesterday.

Patience, we’re often told, is a virtue and that was the deciding factor as St Eunan’s reclaimed the RTÉ Raidió na Gaeltachta SFC with a three-point win over dethroned champions Glenswilly at MacCumhaill Park yesterday.

The victory was St Eunan’s 14th at the senior bracket and brings the Letterkenny club level on triumphs with chart-topping Gaoth Dobhair, without the need to open that can of worms on the 1997 debate of course.

The clash of styles was stark, with St Eunan’s content to play a patient possession game with Rory Kavanagh and John Haran acting as the conductors, while Glenswilly played with their trademarked direct and powerful strategy.

Michael Murphy was double and often treble marked inside by St Eunan’s zonal defence so had to come deeper and deeper for possession. When he did, he was well shackled by Eamonn Doherty.

Glenswilly, last year’s champions and beaten Ulster finalists, were never out of the contest but will lament the fact they managed just a solitary score from play – when Brian Farrelly pointed on 27 minutes.

With one last throw of the dice, two points down, Glenswilly’s Ruairí Crawford pumped one desperate ball into the St Eunan’s square to Murphy.

It was, though, Kavanagh who claimed the ball above his head in the cluttered square and his sprint into open space led to Conall Dunne pointing a consolidating close-range free with the last kick of the game.

In a quick-fire six-week championship that was sometimes defensive and always intense it was the two teams who had most recently run the course who made the final.

St Eunan’s lost centre-fielder Kevin Rafferty, who is considered one of their vital components of experience in a side with plenty of fresh faces, to a serious eye injury after a coming together with Joe Gibbons.

Haran, playing in his 12th senior final two days before his 38th birthday, mucked in alongside Kavanagh. Mark McGowan, who retired at Christmas last year at only 24 years of age with a persistent hip injury, had been clocking up a handful of minutes here and there as he was sticking his toe back in the football water. His role, with Rafferty on his way for an x-ray, was more than he might’ve ever expected.

By 23 minutes, three Dunne points and one from Conor Gibbons had edged St Eunan’s into a 0-4 to 0-1 lead, with Gary McFadden having registered Glenswilly’s only point at that stage.

But it was then Murphy showed his ability to click up through the gears. He went on one rampaging run on 25 minutes, straight as an arrow as St Eunan’s players bounced off him before being grounded by Michéal Martin.

Murphy, irritated to see his path blocked, stroked over the free and then another from the shadow of the stand almost 45 metres out, either side of Farrelly’s effort.

Glenswilly, despite having not played anywhere near their capabilities, were level at 0-4 to 0-4 and would’ve gone in level at half-time had St Eunan’s not edged ahead again through Gibbons.

It’s difficult to know which manager would’ve been more content at the interval. Curran’s side were in front by the minimum but were guilty of kicking eight first half wides.

Meanwhile, Glenswilly manager Gary McDaid saw his team much blunter than the one who hammered in 3-19 in last year’s showpiece against Killybegs.

The trend of the contest was one of edginess. St Eunan’s would continue to plot away and managed to double their advantage when Sean McVeigh scored before McFadden, with another placed ball, replied for Glenswilly.

The tentative nature of the match meant that everyone was almost waiting with bated breath for an explosion. A goal, though, never looked likely as the only save either goalkeeper had to make was when Gerard McGrenra in the Glenswilly goal comfortably gathered from Haran’s slap after Conor Parke’s ball in.

Trailing 0-6 to 0-5, Glenswilly were unfortunate not to get level with McFadden struck an upright from a placed ball. It was the second time his team had been denied by the higher part of the woodwork.

Tip-toeing their way to victory, maintaining their policy of patience in possession, Dunne scored the fourth of his five points before Parke found a rare pocket of free space in the Glenswilly backline to put his team three up, 0-8 to 0-5, with time running thin.

Glenswilly managed to pull one back with Murphy’s 45 and pushed late for a goal that would’ve kept their grip on the Dr Maguire Cup.

Neil Gallagher had almost got a touch on a Joe Gibbons centre in the lead-up to that award.

Kavanagh then intercepted that Crawford ball, a Hail Mary if you like, toward Murphy and Dunne sealed the deal as St Eunan’s prayers were answered.

The new-look side, with a few wily campaigners, are champions again. The more things change, the more they stay the same.