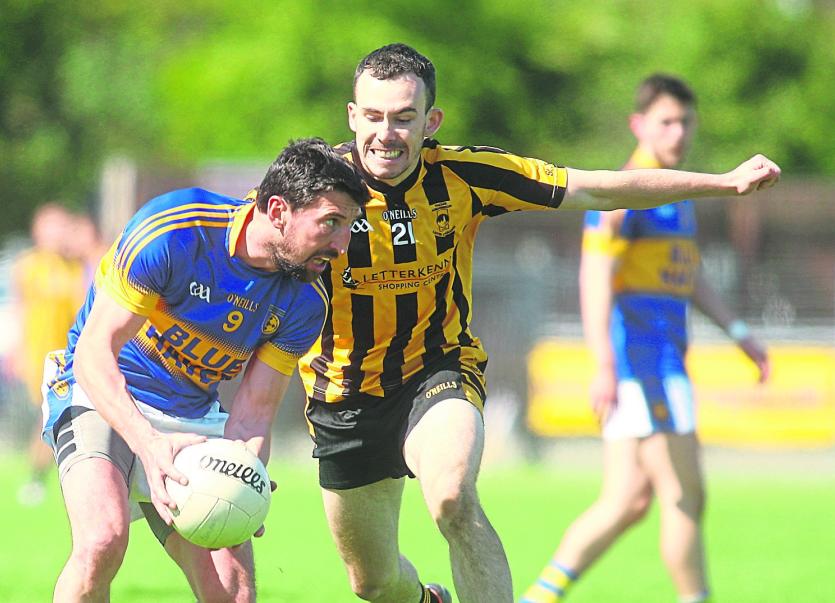 In control . . . Michael Hegarty in action for Kilcar against St. Eunans

When it comes to championship football experience few footballers preparing for this year’s Donegal club championship which gets underway this weekend come close to Michael Hegarty.
The Kilcar vetertan who turned 40 in May is looking forward to his 24th championship having first tasted championship football as a 17-year-old.
And as he reaches the closing stages of a glistening career that was far from success-laden in the early years, he is enjoying the game and is looking forward to Kilcar’s opener against Malin on Sunday.
Indeed, he’s preparing for this weekend’s Towney showdown with the same sense of excitement and enthusiasm that he had back in 1996 when he was first called into the Kilcar senior squad by then joint managers John Carr and Charlie O’Donnell.
“My first taste of championship football was against Killybegs,” Hegarty recalled this week.
“It was a quarter-final game back in 1996 in Tir Chonaill Park in Donegal town. I came on as a sub in the last few minutes.
“It was a big game for us. Killybegs were the champions and our neighbours. As far as I remember Killbegs won by a couple of points and went on and won the championship for a second year in a row.
“Killybegs were the top team at the time with the likes of Manus Boyle, Barry McGowan, Barry Cunninghan, John Cunningham, all of them All-Ireland winners along with John Ban Gallagher, Peter McGinley, Mark Boyle, the Carberrys Denis and Paul.”
The following year, Kilcar, with county minor Michael Hegarty now in the team, put an end to Killybegs’ drive for a three in a row n a county quarter-final, back in Tir Chonaill Park.

But an emerging St Eunans, who were about to dominate the following decade, put an end to Kilcar’s march in the county semi-final.
“That was the year of the whole Leslie McGettigan controversy and it was the beginning of a period of dominance by St Eunans,” Hegarty said.
“It was also the end of a very successful period for Kilcar and the beginning of the end of the great team that won a number of championships in the 1980s and in 1993.
“Players like Martin and James McHugh, Michael Molloy, Christy Gillespie, Kevin Lyons and Michael McShane were all coming to the end of their playing days.”
Kilcar went into a period of transition and although they survived in Division One for a number of years, the heady days of winning the championship and playing teams like Killybegs and St Eunans in big knockout games in Tir Chonaill Park and MacCumhaill Park were coming to an end.
Kilcar lost its struggle to survive and Michael Hegarty and Kilcar ended up playing in Division Two for a number of years in the 00s.
“That was a black day for the club,” Hegarty said. “The day we were relegated to Division Two.”
Kilcar spent a number of years in Division Two and had to survive a play-off to avoid dropping down to Division Three.
“They were a tough few years. Fighting to avoid dropping to Division Three was the lowest point.
“We won the All-Ireland Gaeltacht in 2008 .It was in Glen that year. That gave us a lift and we won Division Two and were promoted in 2011.
“Young players were beginning to come through from underage and from 2012 on we felt we could compete again.
“We won the All-Ireland Gaeltacht again in 2014 down in Galway. That was a huge boost and was a great experience for the new lads in the squad and gave them confidence to go on and challenge again.
“We reached the county final in 2016 under Martin McHugh, our first final since 1993.But we lost that final to Glenswilly.
“But we came back in 2017 and won the championship. We beat Glenties in the final. It was a great feeling after all the years. It was the club’s first in the 24 years since ‘93.
“Glenties beat us in the semi-final last year but we were short Ryan (McHugh) and Patrick (McBrearty). But we are back again this year and looking forward to the championship.
“We’ve had a good league and we won it. It was our fourth league win in six seasons.
“We used a lot of players and a lot of young players were given a chance. A number of them have shown up well and proved they are fit for senior football.
“We’ve a good strong squad now and we have Ryan (McHugh) and Patrick (McBrearty) back fully fit and the rest of the lads are fit and well and looking forward to the championship.
“Gaoth Dobhair are Ulster champions which I think is a massive boost to the championship.
“Slaughtneil beat us the year before in the Ulster semi-final. If we had taken our chances we could have beaten them, and they went all the way to the All-Ireland final.
“We’ve four or five teams looking forward to this year’s championship with the belief that if they are lucky enough to win the championship they are also capable of winning Ulster. That has to be good for the championship.”
Michael turned 40 in May, but the thought of nailing his boots to the back of the door hasn’t entered his mind just yet.
“I’m enjoying my football. I started out in the forward line and played in midfield and this season I’m featuring at centre half back, a position I never envisaged playing in my younger years.
“I’m enjoying playing at centre half back and we have a very good squad of players, probably the best squad we’ve ever had in the club. They are a very ambitious group of players and they want to do well for the club.
“And as long as I’m enjoying it and I feel I can play my part I will play on.”