Delight as sport opens up again for youngsters 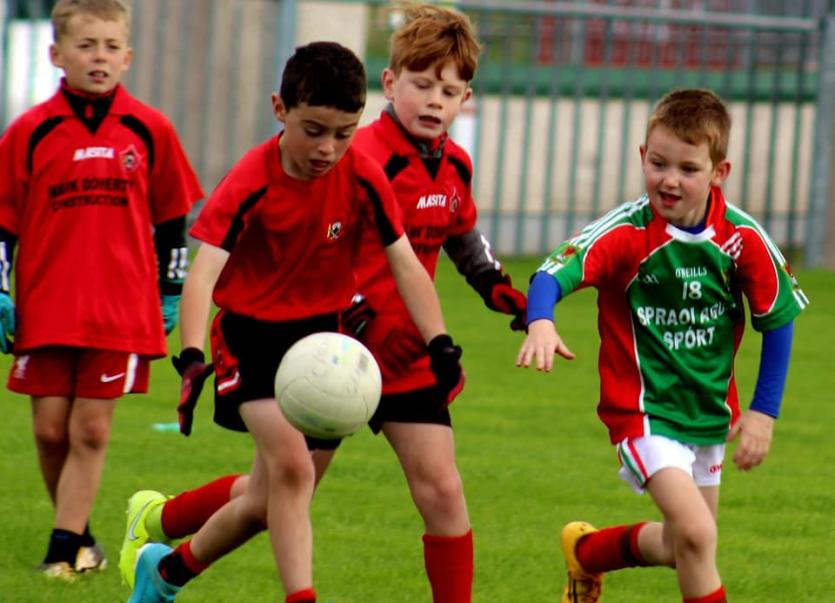 Youngsters from Urris and Carn in action last September shortly before things were locked down again. PICTURE: Caroline McLaughlin.

Inishowen's sports pitches will be a hive of activity soon as the peninsula's GAA, soccer and rugby clubs prepare to welcome their underage players back to the fold.

In just three days time, non-contact training (in pods of no more than 15) can go ahead for all players under 18, with a further announcement on when competitive play can resume expected in the coming weeks.

It will be the first time that youngsters have taken to the pitches since the abrupt cessation of sporting activity back in September last year.
Administrators and coaches from both the Inishowen Youth & Schoolboys League (IYSL) and CLG Bord Inis Eoghan have been working hard behind the scenes in a bid to tailor a programme that will work best within the context of the current covid situation.

Inishowen Board chairman Gerard Callaghan told Donegal Live: "We are overjoyed at the prospect of a return to play for all the underage club members throughout Inishowen who have forfeited so much in terms of fun, training and games for the health of their elder family members since we called a halt to our games on 22nd September last year.

"There is no date as yet for the resumption of club fixtures, but once an announcement is made in that regard we will have a programme that takes the factors of time and covid adherence guidelines into consideration.
"At this initial stage this is a tentative return to play, as Gaelic football is obviously a contact sport but at the minute the training must be strictly non-contact.

"But it is to be welcomed nevertheless. The wains have been locked away for six months, so even from a mental health and well-being perspective it is a very positive thing that they will now be able to get away from the Playstations and have normal interaction with kids their own age."

And Callaghan's sentiments were echoed by IYSL fixtures secretary Stephen O'Donnell, who said the resumption of training was hopefully the first step in a move to a fuller programme of play in the near future.

He told us: "The return to training, restricted though it may be, is a good place to start. It's imperative that young people get back out in some capacity.
"Because they have not been allowed to mix with their friends, I would imagine quite a few haven't picked up a ball in the last six months, so it's great that they will now be back in a structured environment where those skills can be refreshed and improved upon.

"The fact that there must be a clear two-metre radius around each player during training is obviously far from ideal, and on top of that there are a variety of additional covid guidelines that must be adhered to - but at least there seems to be a bit of light at the end of the tunnel.
"Hopefully this will be the road back to some sort of normality; whatever that new normal will be."