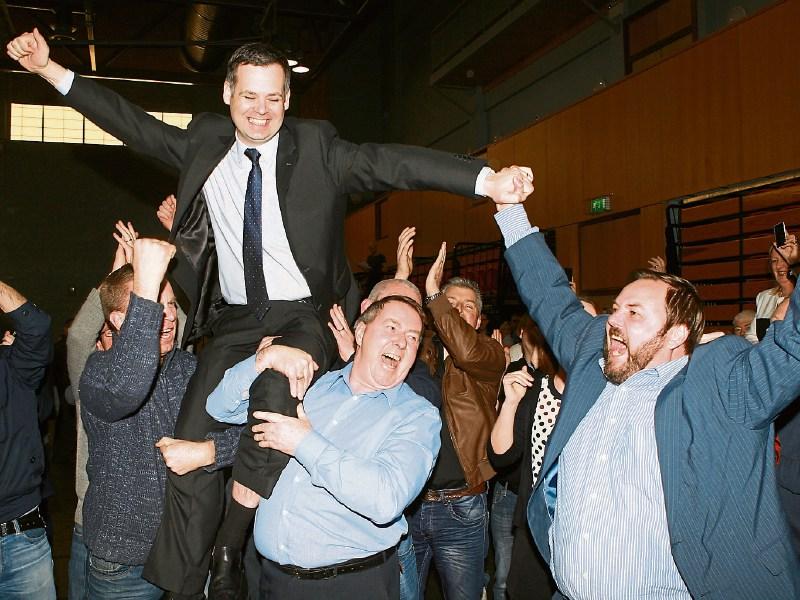 Pearse Doherty, Sinn Féin candidate and TD, was elected on the eighth count yesterday at the Aura Leisure Centre in Letterkenny.

A large portion of the distribution transfers from his party colleague, Cllr. Gary Doherty, put Deputy Doherty over the top shortly before 5pm on Sunday, the second day of a long Donegal constituency count.

Deputy Doherty was elected with 14,600 votes, about 19 per cent of the valid poll in the constituency. When Cllr. Gary Doherty’s 4,456 votes were distributed, Deputy Doherty received 3,410 of them and Sinn Féin TD Pádraig MacLochlainn took an additional 535.

“I don’t think any party can command that type of transfer pattern, and that’s down to the fact that people are not just buying into an individual but are buying into a clear message, and that’s very hopeful for Sinn Féin,” Deputy Doherty said, crediting Cllr. Doherty as “an absolutely excellent candidate”.

He said the election has solidified the 2011 Sinn Féin vote in the county. “They’ve stuck with us, they’ve agreed with what we’ve been doing,” he said. “And they’ve turned out to elect me so far.”

After his election, the Gaoth Dobhair-based TD was raised shoulder high to applause and cheers from supporters. His party colleague Pádraig MacLochlainn, TD, in a battle for the fifth Donegal seat, joined him, and the two outgoing TDs raised their hands in celebration of Deputy Doherty’s win.

In 2011, Deputy Doherty was elected on the first count for Donegal South West, after winning the constituency by-election in 2010.

The Gaoth Dobhair-based TD did well across the county in Election 2016 but was quick to credit the Sinn Féin team. “I’m the person who represents the party at national level and my face is up on the poster but what we’ve been selling people across the country is the Sinn Féin message of a better way, of an alternative,” he said.

He defended the party’s three-candidate strategy, saying Cllr. Doherty played his part in getting out the vote and transferring votes to himself and Deputy MacLochlainn.