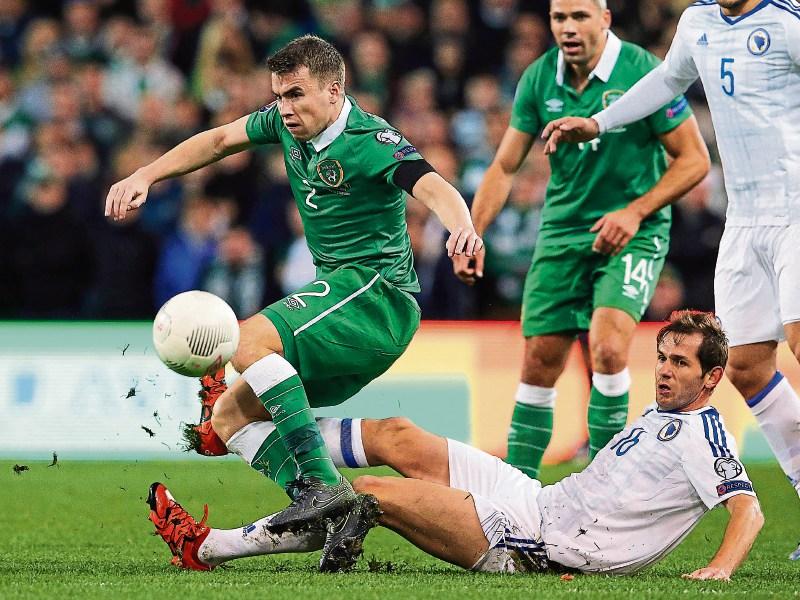 There is a superb feature today in the Irish Times by Michael Walker who has spoken to Seamus Coleman, the Everton star, about the importance of home and his wish to play gaelic football again with Killybegs after his professional soccer days are over.

Walker writes: “Coleman’s GAA past – and, he hopes, future – is well-known. Had it not been for Sligo Rovers’ intervention, the Everton and Ireland right back could have been appearing for Donegal in All-Ireland finals. GAA is a sport and culture he loves and, though Coleman is now a settled man at Goodison Park, it is in part because he sees a resemblance in the rootsy image of Everton – ‘The People’s Club’ – and Na Cealla Beaga in Killybegs. ‘Everton’s a real family-orientated club and back home the GAA club I’ve been involved with is also like that – close-knit, warm,” he says. “There are similarities, yeah’.”

Elsewhere in the Irish Times article Michael Walker tells us: “But Killybegs is Coleman’s real home. This is where he was born and raised, where his family remains, where his wife Rachel comes from and where Coleman wants to be. His father Henry runs the Bay View Hotel in the town; his father-in-law Pat Cunningham works aboard the Pacelli, one of the mackerel trawlers operating from the harbour. Premier League glamour is one thing; Donegal life is another.

‘I’ll go back to Killybegs when I finish but I think it’ll be a case of playing for Killybegs GAA and St Catherine’s, the local [soccer] club. I don’t know about the League of Ireland’.”

For more see the Irish Times for a fine feature on Seamus.