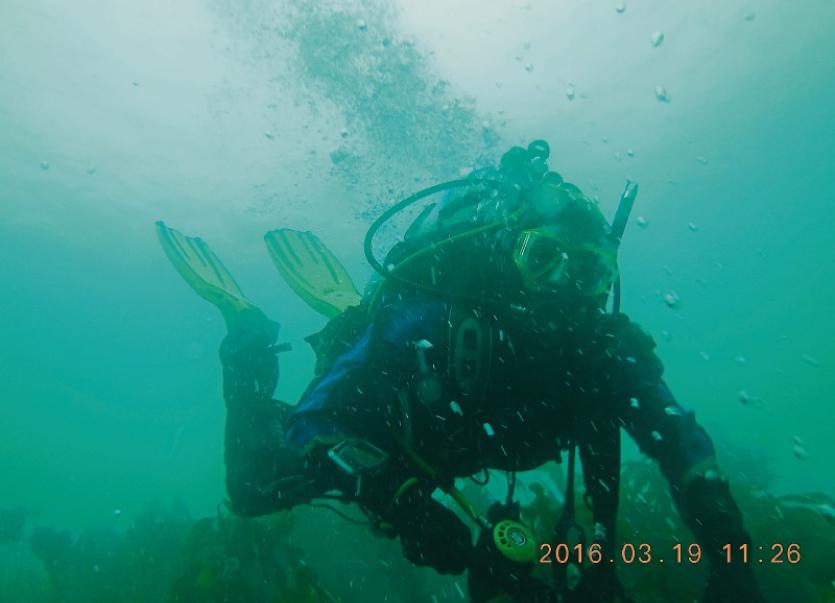 The Saturday morning dive was a one-boat, one-stick affair at Melmore Head, thanks to Alison Bourke who provided dry coxswain duties on the day.

The trip was an opportunity for two club members to get their first dive of the 2016 season and so they kept to a depth of no greater than 20 metres for the dive duration of 35 minutes.

In-water conditions were every bit as good as topside, with horizontal visibility of just less than 10 metres and temperatures of 8 degrees Celsius.

Marine life on site, especially fish life, was quite busy, with a number of large wrasse present under the rock overhangs that dominate this site. Other fish species observed were bib, solidary pollock and a significant shoal of juvenile pollock.

Another feature of the Melmore Head dive site is the presence of a small steel trawler, which the divers came upon early in the dive. It was noticeable that the condition of the wreck had changed since last autumn, with a considerable amount of the sand that had been previously in the wreck scoured out by the winter storms.

With all divers safely recovered and a transit report sent to Malin Head to alert them to the conclusion of the dive, Alison turned dive boat Áine around and returned to Mevagh at optimum speed.

When the Saturday morning divers were leaving Mevagh they met a visiting dive party from Dundalk SAC arriving at the slipway, also preparing to take full advantage of a beautiful spring day off the coast of Donegal.

The Sunday morning snorkel from PortnaBlagh was also conducted in the best of weather conditions and in keeping with previous Sundays there was another big turnout of club members in the water.

The snorkelers, including the new trainees and returning divers, swam out across the bay towards the golf course point, and in doing so put in a very energetic water fitness session, which will stand them in good stead for the upcoming dive season.

In-water visibility was as good as anything that could be seen in the summer, indeed better than would be expected once the plankton bloom begins to grow.

This natural growth is simulated by a combination of rising water temperatures, increased sunlight and the presence of the macronutrients stirred up by the winter storms. When these factors come together the photosynthetic phytoplankton explode in numbers and are then consumed by zooplankton, all of which are suspended in the upper reaches of the water column and consequently drastically reduce in-water visibility.

However, the loss of visibility is a small price to play when considered against the benefit that plankton provides, as they take the energy from the sun and through the food chain provide sustenance for life fish up to and including the largest fish on the planet and in doing so essential food for a protein hungry human population.

But on Sunday with the divers being able to see the sea bed for good deal of the journey over and back across the bay it was just a perfect weekend for diving in Sheephaven Bay.