1,300 skeletons unearthed in first excavation of a medieval Gaelic cemetery 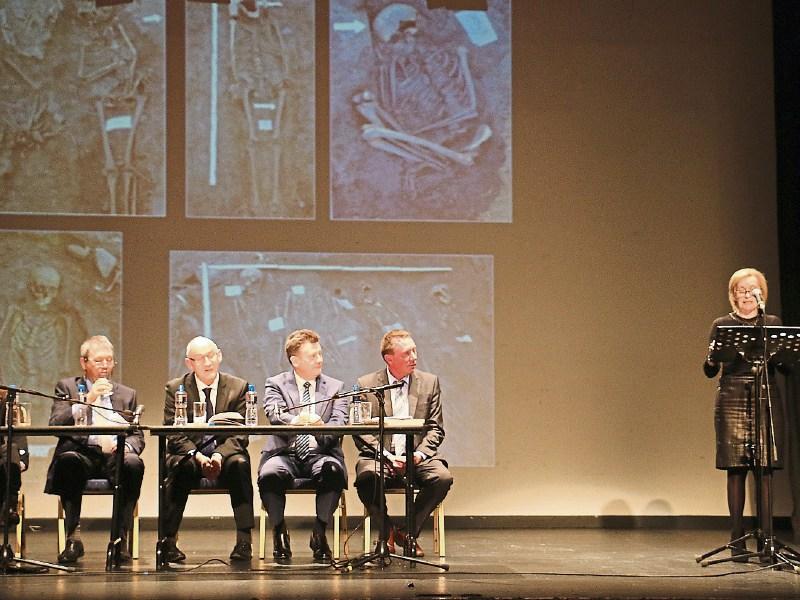 The Abbey Arts Centre was packed out last Wednesday evening for the launch of a new book on archaeological excavations in Ballyshannon.

There was a terrific atmosphere of old friends reunited after a dozen years.

On hand were engineers, including Damian McDermott of the National Roads Design Office in Drumlonagher, who worked on the design and construction of the N15 Ballyshannon to Bundoran bypass back in 2003-2004, when a medieval burial ground was unearthed.

The engineers met up again with the archaelogists, including Michael MacDonagh and and Dr Catriona McKenzie, who painstakingly excavated nearly 1,300 skeletons and countless artefacts from the site. Dr McKenzie recalled expecting to find the remains of up to 100-150 individuals and being amazed at the scale of the previously undiscovered graveyard.

"It was really exciting because this was the first Gaelic medieval cemetery to be excavated in Ireland."

The engineers and architects, in turn, caught up with locals such as Mary Coyle and her neighbours Michael and Bernie Finan, who played host at Ballyhanna, providing the workers with much appreciated cups of tea.

Mrs Coyle told the Democrat, "It's lovely being here and seeing them all again. We used to bring them tea. I felt so sorry for them, it was such a cold winter. I don't know how they managed it."

Mr Finan said that although the work went on outside their front door for six months, the disruption was kept to a minimum. "It was well organised by Michael MacDonagh and his team."

All three are happy to welcome visitors who want to see the park and memorial at the site. Mrs Coyle said, "I've had visitors and, when they drop the key back, I offer them a cup of tea and we have a chat. They've told me that's been the highlight of their trip."

Adding to their numbers at the book launch were researchers from Sligo IT and Queens University Belfast, who have spent the last twelve years cataloguing and studying the finds, in a unique cross-border collaboration. Their work has been supported by Transport Infrastructure Ireland (TII); the Department of Tourism, Transport and Sport; and Donegal County Council.

The occasion of the reunion was the publication of The Science of a Lost Medieval Gaelic Graveyard: the Ballyhanna Research Project, edited by Catriona McKenzie, Eileen Murphy and Colm Donnelly.

Mr MacDonagh called the book "the jewel in the crown" of the collaboration. Some of the key aspects of the work and its findings were highlighted in display boards in the foyer, in a slideshow in the main theatre, and by speakers at the launch.

The featured guest speaker was Professor Marie Cassidy, who, in addition to being Ireland's State Pathologist, is Professor of Forensic Medicine at the Royal College of Surgeons.

She is also, it turns out, a fantastically entertaining speaker. Professor Cassidy had the audience in stitches as she shared anecdotes from her remarkable career. For example, she recalled hearing about bones turning up during major construction projects and thinking, "Isn't it lucky that there always seems to be someone around who knows about these things?" Until, that is, a colleague finally pulled her to one side and explained that archaeologists are always on hand at the start of major roads projects, as a matter of policy.

She praised the archaeologists for their "truly exceptional work" on the Ballyhanna project. The new book and accompanying CD came in for equal praise.

"Anybody who goes and looks at it, you will marvel at it," Professor Cassidy said.

The Science of a Lost Medieval Gaelic Graveyard: the Ballyhanna Research Project can be ordered online at www.wordwellbooks.com.