Charlene and Julianne - ever present in golden era 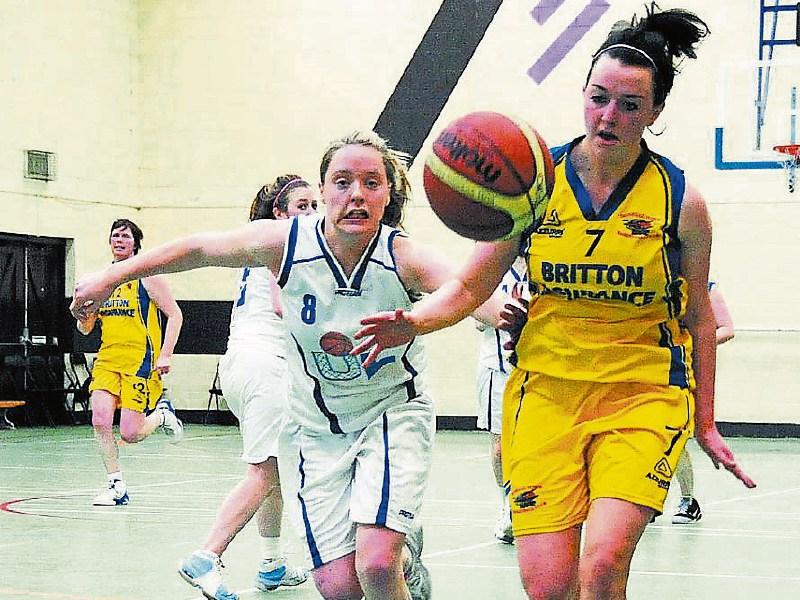 The defeated Letterkenny IT to win the North West Cup for an eighth time in nine seasons. And they completed the double with a North West League final win, also over LYIT, to claim league honours for a seventh time in-a-row.

The success has seen Donegal Town has take over as the dominant force in Ladies Basketball in the North West Region.

Charlene McHugh and Julianne Murphy are the only members of this season’s double winning team who have been on board all teams dating back to that first North West Cup winning side of 2007.

They are followed closely by Tara Khan, who has six league and six cup winners’ medals.

Charlene McHugh is one of Donegal’s most decorated sportswoman; as well as her eight basketball cup and seven basketball league medals with Donegal Town, she also won a North West League with Kilcar before she joined Donegal Town.

The Ardara woman is an All-Ireland Gaelic Footballer winner with Donegal and the holder of nine Ulster Gaelic football medals won with Donegal from underage right up to senior.

“Yes, we have enjoyed great success since I joined them in 2006. At that time LYIT were the dominant team in the county and the team to beat but we stuck at it and worked hard and it paid off. .

“We always had a great bunch of girls and there was always a great bond between us and we were all good friends and were well coached by Kevin Sinclair.”

It was coach Kevin Sinclair, with much prompting from his niece, Julianne Murphy, that recruited Charlene, who was already an All-Ireland winner with Donegal Ladies Gaelic footballers.

“I played Gaelic from the age of 12, but I always loved basketball and it was always my favourite sport.

“My brother, John Kennedy, played basketball and I really looked up to John and he was my inspiration.”

Charlene first played basketball at St Columba’s Comprehensive in Glenties where she was coached by Manus Brennan, a member of Donegal Town Basketball Club. Her first club was Ardara and after the Adara club folded at the end of her first season she joined Kilcar.

She played for Kilcar for three years and won the first of her North West League medals with Kilcar under coach Kathleen Keeney.

It was back to a reformed Ardara for a year, before the club dropped out of competition once again after just one season.

It was on a trip to Dublin for an Ireland International game at the National Basketball Centre in Tallaght with her brother John, Kevin Sinclair and Julianne Murphy when she received her first approaches to join Donegal Town.

“Kevin mentioned it a few times on that trip and I had got to know Julianne from playing with the Donegal All-Stars. We had clicked from the first time we met and had become good friends.

“Julianne also got on to me about joining Donegal and so I did in 2006 and while it was a tough first season we had a good 2007 season and won our first North West Cup at the end of the season.

“We have dominated the competition ever since. The only game we lost in the nine years in the Cup was to LYIT in the semi-final, four or five years ago.

“We have won the league for the last seven years.

In that time too, Donegal played in National Ladies Basketball League and Cup for three seasons and played against all the top ladies teams on the island.

“It was a big step up and at a whole different level. We won two games in the league over three years and one in the cup. Meteors from Dublin, the University of Limerick and Portlaoise Panthers are the teams we beat which was a huge achievement for us. They are three of the top ladies clubs in the country.

“It has been brilliant over the last nine years and I have great memories, made great friendships and they were many great days to look back on.”

Julianne Murphy lived the first nine years of her life in Newbridge, Kildare, before moving to Donegal Town, her mother’s Eileen Sinclair’s home place, in 2000.

Her father Kieran is from a strong GAA family.

Her first introduction was at Scoil Aodh Rua agus Nuala in Donegal Town. Her indoctrination continued in Abbey Vocational School. And when she moved to third level college and the University of Limerick, Julianne played for UL in first and second year but by now the Donegal Town Ladies had started making the first of their waves.

“I did my Leaving Certificate in 2007, the year we won the North West Cup for the first time and with me coming home every weekend to play, it was not possible to give the commitment to the University team.

“My uncle Kevin (Sinclair) was our coach and when Sinky was on board I was on board and really things took off after that and we finally got a win over LYIT. They were our toughest opponents in the first couple of years.

“It took a lot of hard work and commitment to get over LYIT, who were the dominant team. Charlene McHugh and myself were on the team in the first year and were then joined by Tara Khan, Brigid Murphy and Caroline Breslin who were also on the team for the most of the successes.

“And down the years we have been joined by many other great players that made us a special team and all very good friends.”

When it comes to the highlights over the last nine years, Julianne does not have to give them a second thought. They were finally overcoming LYIT to win that first North West Cup and the three years playing in the Ladies National Basketball League and Cup.

“That first win over LYIT was a huge thing for us at the time. They had been the top team and had dominated Donegal Town for a few years before. It was such a relief to finally beat them in a big game. It was simply huge for us.

“I know we did not enjoy much success for the few years competing at national level, but it still was a brilliant experience for us travelling to places like Killarney, Tralee, Galway and Dublin and playing against the top ladies teams.

“It was a whole new experience for us. The highest level I had played at school was in D competitions and all of a sudden we found ourselves playing against girls who had played at A level right through school and college.

“The travelling was tough up and down the country every weekend and the games were tough but we learned so much and we became far more professional in our approach and preparation.

“Things like doing an hour long warm up before games and learning about diet and rest and the whole way the game was presented with referees properly kitted out and everything run in a professional manner.

“We took many of those things on board and I think they have contributed to our continued success and has also raised standards in our own regional competitions.”

And what of the future?

Julianne graduated from the University of Limerick with a degree in Physical Education and Geography. She is currently on the staff at Coláiste Cholmcille in Ballyshannon.

However, she has just qualified for a career break and next August heads off to Abu Dhabi in the United Arab Emirates to take up a teaching position.

“I’m going initially for a year, but it may be longer so there is a sense that maybe this is the start of the breakup of this team, who knows?

“All I know is that I’m going to be away for at least a year. From what I know basketball is not played in Abu Dhabi, but I will be taking a basketball with me.”

“I don’t know what I’m doing next year yet. I have made no decision and I’m still deliberating. I suffered a bad knee injury last year and I was six weeks in a brace and being self employed it was a difficult time and increased the workload on others which was unfair.”

Charlene runs the very popular Links Bar and Restaurant at Narin and Portnoo Golf Club with her brother Michael Kennedy.

In all 34 players played over the last nine seasons for Donegal Town Ladies and below is a breakdown of all the top 13 and the number of honours they won.

Others who have been part of

winning squads for between

one and four success include: