The 'Ramblers' take a ramble to play in Geneva 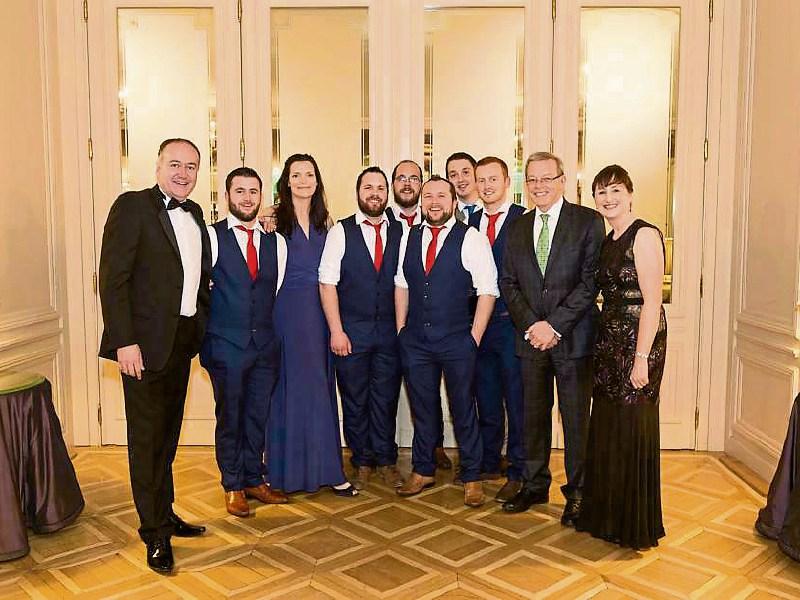 An affluent five star hotel in Switzerland which is often frequented by royalty and high society played host to a group of talented musicians from Ballyshannon and Ballintra during the recent St. Patrick’s day festivities.

The talented group, the ‘Rockhill Ramblers,’ which is made up of musicians from both Ballyshannon and Ballintra were invited to attend the event by Ballyshannon native Oliver Donagher who now resides in Geneva.

Mr. Donagher became involved with the Geneva Irish Association last year and quickly became recognised for his talent and ability and became the Vice President of the association over a very short period of time.

This year he organised a St. Patrick’s Day Black Tie Gala Ball which was held on March 19th in a five star hotel, called ‘The Beau Rivage.’

The theme of the night was ‘The Geneva Irish Association and Friends of Ireland.’

Geneva is the European headquarters of the United Nations and a major financial services institution, the event catered for almost two hundred nationalities from as far away as Russia and Nepal, Iran to Italy and from the United States of America to Australia.

Many people from Ireland who are now living in Switzerland attended the event as well.

Mr. Donagher said: “In order for the night to be a complete success, I knew we would have to have a good band.”

He recalled his hometown and the evenings he spent with friends in ‘Whoriskeys Travellers Rest,’ Cashelard where he heard the ‘Rockhill Ramblers’ play and decided that this was the band that he would like to see play at ‘The Beau Rivage.’

He contacted Darren Meehan from the band and discussed having them perform during the festivities. Darren and his band members were delighted with the invitation and flew to Geneva ahead of the event. The organisers also managed to secure the band a gig in the ‘Spring Brothers’ the night before.

Darren said: “It was an excellent night. We all really enjoyed it. I’d like to go back again. It was a lovely place. The performance went down well, it was well received.”

The ‘Rockhill Ramblers’ were formed in 2009. The band was initially a group of brothers and later other band members joined.

The band played in the diamond in Donegal town on the night that the Donegal players returned having won the Sam Maguire in 2012. They have also supported the nationally renowned band the ‘Sawdoctors.’

The performance in Geneva marked one of their bigger overseas performances and they proved to be such a success that they have been invited to come back and perform next year.

“We were delighted with how things turned out. The six of us were flown over and everything was organised. Everything was done for us and we would like to thank Oliver Donagher and the members of the Geneva Irish Association.”