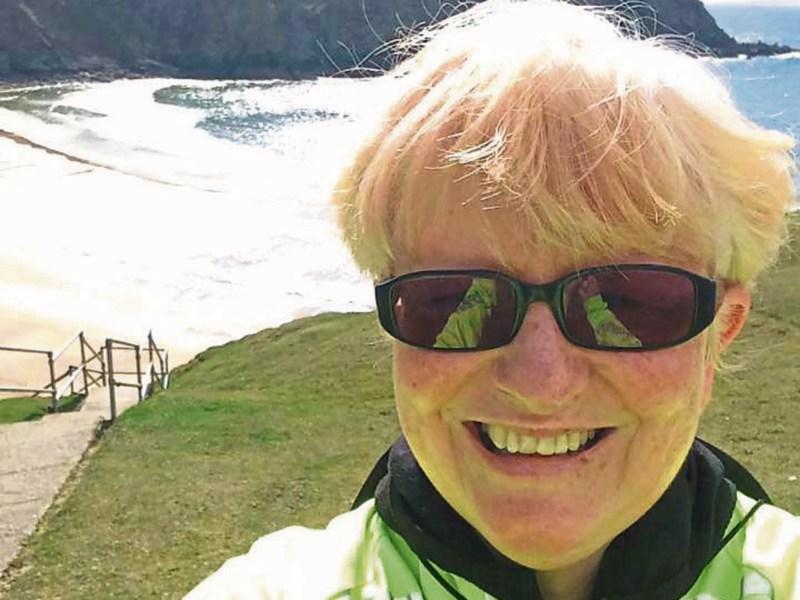 A woman who is walking the entire Wild Atlantic Way in aid of the RNLI has been overwhelmed by her first ever visit to Donegal.

Jane Volker, a native of Limerick who has been living in the UK for the last 27 years, is currently finishing what might be called her 'test run' for the big hike this summer.

The special needs assistant spent a week walking in Inishowen in February but quickly discovered that she has a back problem which means she can't carry a backpack.

This didn't put her off, though. Jane came back to Donegal on Good Friday to spend a fortnight hiking the Wild Atlantic Way route here, taking in some of the Ireland's most spectacular scenery.

Although Jane was initially concerned about getting her backpack from one stop to another, she needn't have worried.

“The people of Donegal have been amazing,” she told the Donegal Democrat on Tuesday. “Everyone has been so friendly and helpful.”

When an exhausted Jane arrived on Monday evening, he invited her to join him and the staff for dinner, and didn't even charge her for the meal.

Cliff also came to the rescue when he heard about Jane's back problem, offering to deliver her backpack and collect it wherever she needed over the next few days.

Jane commented, “One of the things that I'm continually impressed with is the lengths that people here will go to to help me out. It's humbling and it shows me every day how much goodness there is in people.”

“The three weeks in Donegal is my 'practice bit', as I didn't want to take money off people sponsoring me unless I knew I could do the whole walk,” Jane said. “Until last August, I was a couch potato. I think part of why I decided to take on this challenge is that I've lived away so long. I felt the need to come back and reconnect.

“Also, I will turn 50 later this year, and that might have something to do with it,” she laughs.”

Jane says she would definitely come back on a holiday. “The scenery is spectacular, with vista after stunning vista and the people have such generosity of spirit!”