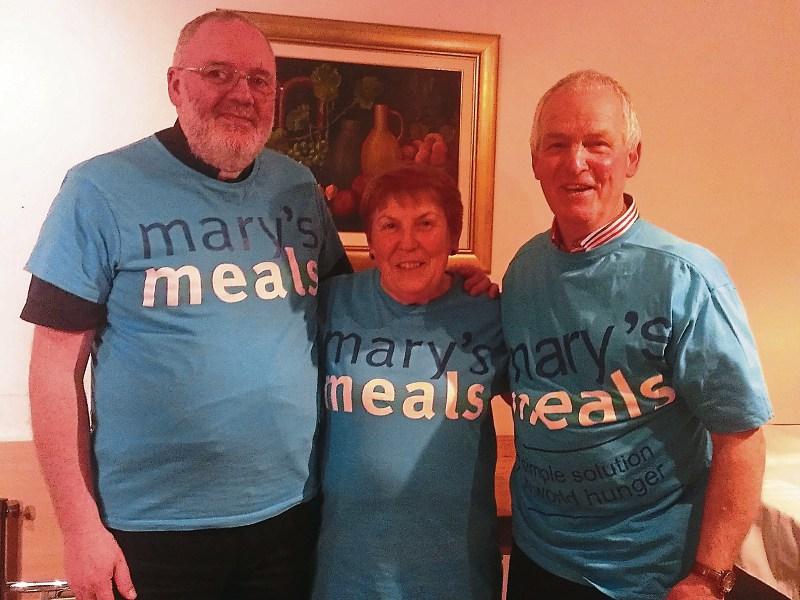 “Has anyone got a calculator on their ‘phone. Can you divide 2,448 by 14.5,” said Fr. Eamon Kelly, as he was presented with the proceeds of a fund-raiser in the Breesy Centre, Cashelard, on Friday night last.

Ann and Gabriel Fee had hosted a guest tea in aid of the children’s charity, Mary’s Meals, which proved to be a major success and the final return was €2,448 , which they presented to Fr. Kelly, who is one of the main organisers for the charity in the county.

The significance of the question posed by Fr. Kelly of using the calculator is that €14.50 is the price of providing a meal to one child in the areas covered by Mary’s Meals for a full year.

When told that the answer to the question was 168, Fr. Kelly congratulated those present and thanked them for their generosity.

The night saw over 100 guests filling the function room of the Breesy Centre where a number of people hosted tables, with the overall organisation of the event carried out by Ann and Gabriel Fee. Entertainment was provided afterwards by Francie Keown.

In thanking Ann and Gabriel and those who attended on the night, Fr. Eamon Kelly, a passionate advocate for the charity, outlined how Mary’s Meals had come into being in 2002 and how it works.

The charity works on the idea of providing meals at schools in disadvantaged areas of Africa. As a result parents are happy to send their children to school as they will be guaranteed one full meal each day. This in turn ensures that children get an education, which has knock-on benefits.

The charity works on a very high level of volunteerism with 93 cent in every euro going directly to the charity; 6 cent goes on administration and 1 cent on promotion.

It is the brainchild of a Scot, Magnus MacFarlane-Barrow and Fr. Kelly pointed out that there are 57 million children missing out on school because of poverty.

“We have ensured tonight that 168 children will be given the chance. Just think of that,” said Fr. Kelly

When Mary’s Meals was launched in 2002, 200 children were fed in one Malawian school, and the charity has grown from that and now well over 1,000,000 children are receiving Mary’s Meals every day they attend school. It is an amazing story of hope.