This is an excellent production and the pity is that it staged for only two nights. Maybe Donegal Drama Circle could be persuaded to revive it for a longer run in the not-too-distant future, but good news too that it will be staged at An Grianan. 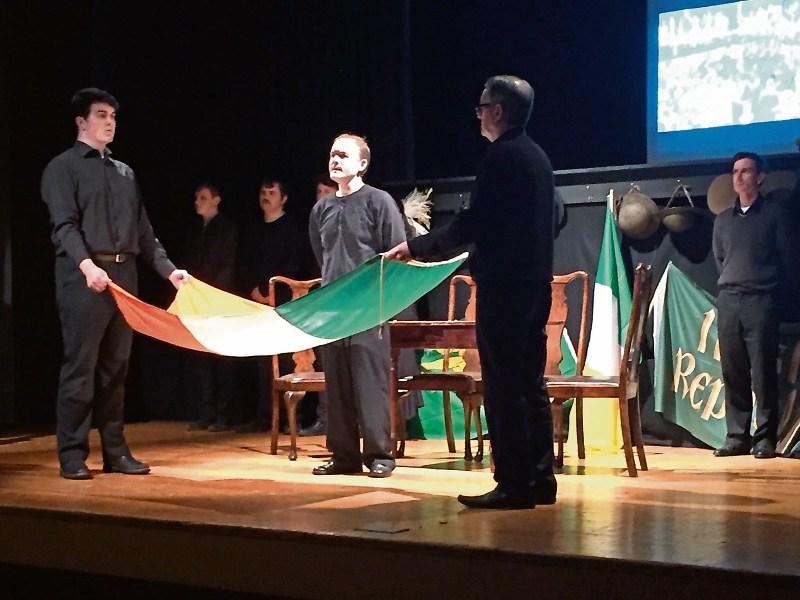 Donegal Drama Circle has staged another tour de force with their bravura production of "The Patriot Game" by Tom Murphy in the St John Bosco Centre.

Written originally in 1966 for the BBC's 50th anniversary commemoration of the 1916 Rising, the drama takes the form of a play-within-a-play but loses none of its punch because of that.

With Amanda Crawford directing and also taking the part of the Narrator, this could so easily have become a one-woman show. But the troupe of fourteen actors - mostly on the right side of 30 -maintain a steady pace throughout, depicting a total of 30 characters, including plotters, Dublin castle administrators, by-standers and fighters on both sides.

The production is knitted together by the use of powerful backdrop images, spot-on lighting and sound effects which have all the more impact because they are so few.

The fact that all characters are dressed in nondescript black, with minimal props such as helmets, shawls or rifles, allows maximum scope for the imagination, constantly stimulated by Murphy's masterful script.

Of course, one of the most masterful techniques of the playwright is the use of significant tracts of original material, from Pearse's oration at the grave of O'Donovan Rossa to a full reading of the Proclamation and heart-breaking farewells from the last letters of the condemned rebels.

This production is ideally suited to the story of the rising, which is, after all, Greek tragedy at its best.

To begin, most of those involved thought they were doing something else for entirely different reasons. As the story unfolds, the inevitability of its end gathers shape. But, as with all Greek tragedies, the certainty and fore-knowledge of the dénouement takes nothing from its horror.

This had to happen. And the outcome was what fate decreed. What was planned by the rebels was a shambles and, on the face of it, a ridiculous failure. The leaders disagreed. The plotted rising by hundreds of thousands of volunteers never materialised. The people looking on did not understand and thought they didn't care.

But, when the might of Empire crushed the flickering flame, the people realised that what the rebels wanted was really what they also wanted - what they needed. And what couldn't happen was what did happen.

This is an excellent production and the pity is that it staged for only two nights. Maybe Donegal Drama Circle could be persuaded to revive it for a longer run in the not-too-distant future.