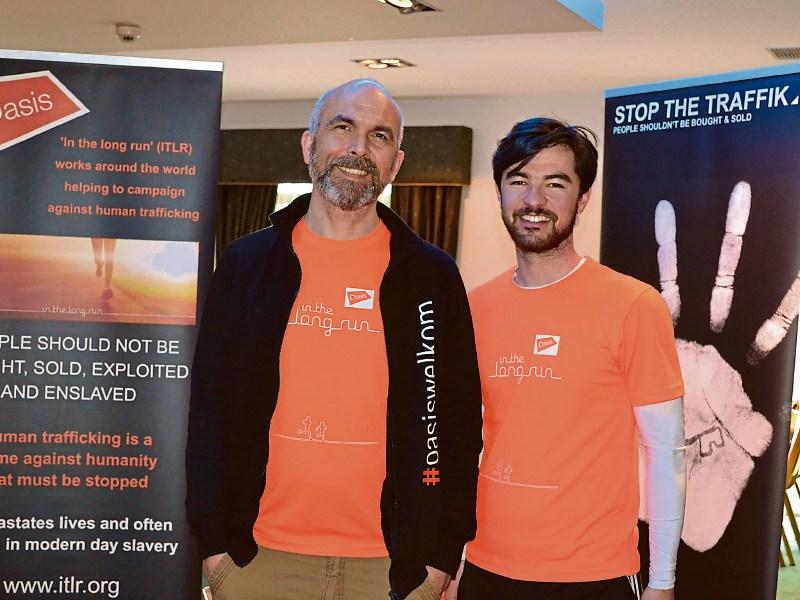 Phil’s key message was “Firstly, treat women as your equals. Secondly, do not let anyone be isolated, be that in school, college, workplace or your community.”

Phil began by talking about his work in Mumbai, India many years ago. Here despite an economic boom and thriving garment industry, absolute poverty was affecting huge numbers of people. Phil worked in a day centre that offered refuge for children and young people who lived in neighbouring slums or on the platforms of the Thane train station.

Phil became concerned about a 7 and 9 year older brother and sister who lived with their parents on Thane station. They had become regular visitors at the day centre but then suddenly stopped attending. After a number of days, Phil went to find out from their parents if the children were alright. After a discussion with the father, Phil learnt that the man had sold his two children for the equivalent of 20 dollars, to a man who had promised him drink.

These children have never been seen since. Nobody knows for sure what had happened to them. In that area of Mumbai children often disappear. They are kidnapped, sold and trafficked into sexual exploitation, adoption and even child sacrifice. Phil was deeply affected by this event and knew he had to do something to prevent it happening to other children.

At the same time a number of UK organisations with a global reach wanted to commemorate the 2007 Bicentenary of the Abolition of the Slave Trade Together. Stories and passions from around the world came together and STOP THE TRAFFIK www.stopthetraffik.org/our-story was born. This is a global movement against human trafficking and building resilient communities.

Phil shared the personal story of a Thai woman who was sold into sexual exploitation so that money could be raised to educate her brother. He described in detail all that has to be overcome to get access to women who have been taken into and around brothels. The many years of support, education and health care that is required before they can see a value in themselves.

Phil related how Roma children in Belgium are vilified and hated. How when the Roma families brought their children to play in the playground, the community came with dogs ‘We don’t want these type of people here.’ Phil linked how people who are vulnerable and isolated are more easily preyed upon by traffickers. Everyone deserves to be treated with respect and dignity.

When Luke Newman, a 23 year old Primary Teacher from England and volunteer with ITLR spoke, he referred to Phil’s experience of twenty years, his depth of compassion and understanding that holds any audience totally captivated and truly inspired.

The fact that 1.2 million children (UNICEF ) are trafficked worldwide every year, is what motivates Luke to be so involved with ITLR. “We have to take it on; there are millions of stories that haven’t been told. Young people like me, like you, must turn our anger at all that we have heard this morning into fighting the cause. Together we will have a louder voice.” Luke stressed the importance of young people been educated around human trafficking in schools. “We need to hear, we need to be educated and we need to be motivated. We must get the message ‘how to stay safe’ out there and to ensure children aren’t isolated.”

It is easy to feel overwhelmed by the enormity of human trafficking but if we keep turning a blind eye nothing changes. A very uplifting moment during the discussion on ‘Action for Change’, was when Phil came in to the conversation and spoke about how people collectively can make an important difference.

Along the Ivory Coast, West Africa thousands of young children are trafficked, enslaved and abused to harvest the cocoa that makes over a third of the world’s chocolate. To eradicate the worst forms of child labour on the cocoa farms STOP THE TRAFFIK campaigners put pressure on the big chocolate manufactures around the world, an industry that is worth approximately 60 billion pounds.

By getting people to simply write letters, send emails, text messages and twitters, make phone calls wear T shirts and most importantly, refuse to eat anything other than traffik-free brands STOP THE TRAFFIK has made that difference. Ten of thousands of people responded and as a result Dairy-Milk fair-trade certification is been produced and Mars Galaxy range will have their whole product range traffic free by 2020. These changes are directly due to the pressure STOP THE TRAFIK has exerted at community level.

‘In the Long Run’ aims to support the efforts of local anti-human trafficking groups in the locations it visits to effectively campaign against human trafficking, to provide and support the provision of information to communities and individuals about how and where they might receive support in regard to human trafficking, and/or how to report trafficking. For the past few weeks they have travelled north and south of Ireland doing just this.

Donegal Anti Human Trafficking group has been truly inspired by the work of ITLR and very much appreciates Donegal Youth Council who hosted a morning workshop on human trafficking; Donegal Traveller’s Project and the Loft who organised the Be Well Week, Letterkenny last week and incorporated ‘ In the Long Run’ into a number of their events.