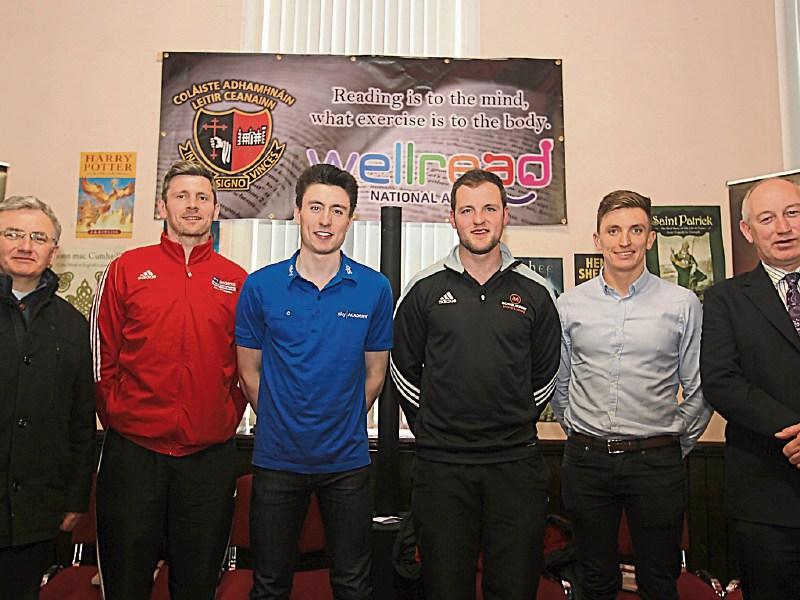 The importance of books and reading, the need for a balance between sport and other things in life and the constant need to stay motivated, were among the topics discussed on Friday at St Eunan's College, Letterkenny by three of the school’s past pupils currently leading the way in their respective disciplines.

International track specialist, Mark English, who will compete in the Olympic Games in Rio later this year, spoke to students about his decision to focus on athletics.

Donegal senior football team captain, Michael Murphy, talked to students about reading and his favourite books. His county team mate, Christy Toye, from St Michael's, recalled the periods of his career when he had to deal with long-term injuries and the constant need to maintain a high level of motivation.

Mark English, who is one of eleven Sky Academy Sports Scholars - the Sky Academy helps young artists, school leavers and graduates develop skills, confidence and self belief - spoke openly and candidly about his sporting life. The holder of two European 800 metre medals recalled his first ever race was an egg-and-spoon dash when he was aged five.

Although he missed out narrowly on the qualifying time for the London Olympics in 2012, it was then he realised that he was able to mix it with the best of them.

Asked by a student in the question and answer session what his aim was going into the Olympics, the Letterkenny native, who is recovering from a foot injury, said he wasn't getting too caught up in setting goals.

“I just want to look back at the end of the year, have no regrets and be happy with the account I gave of myself,” he commented.

Stressing the importance of a solid support structure, Mark was high in his praise for his parents, Joe and Bridget, for always being there for him. Mark is also studying medicine in Dublin and the necessity to juggle study, athletics and down time provides him with another challenge. He reckons athletes at his distance have a relatively shortly shelf life and a career that will end when they reach the age of 30.

Declaring that everyone needs a passion, and a passion to pursue when their sporting career comes to an end, Mark urged the students he spoke to to find their own passion.

Sonia O 'Sullivan and Seb Coe, he revealed, are two of his many sporting heroes. He also disclosed that before he made a decision to focus his energy, drive and passion on becoming an athlete after the Irish schools' track and field championships in 2009, he revealed he harboured ambitions being a professional soccer player with Chelsea or Man Utd.

He also had a strong love for gaelic football and was an underage player with Letterkenny Gaels.