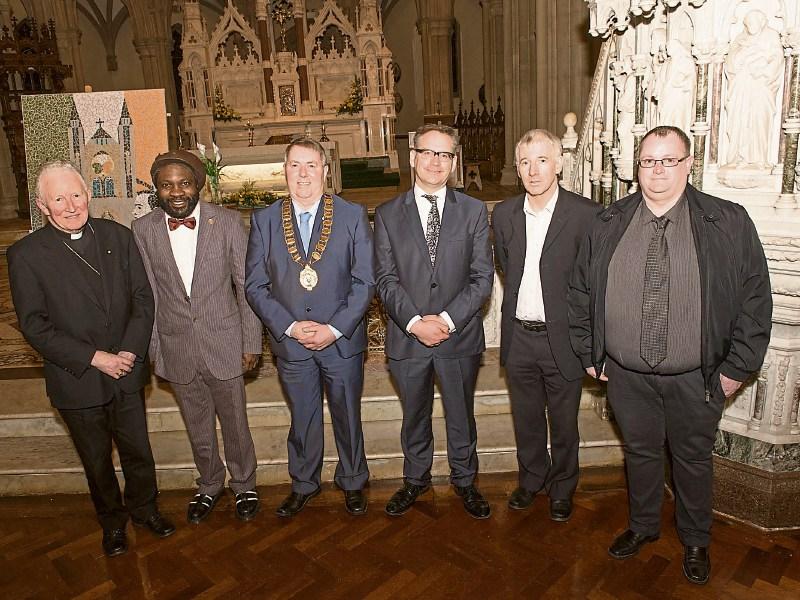 A new mosaic celebrates the link between St. Eunan’s Cathedral in Letterkenny and the Dublin firm of James Pearse and Sons, founded by the father of Easter Rising leader Patrick Pearse.

The cathedral’s Pulpit of the Four Masters and the altar rails are the work of the Pearse firm, and both William and Patrick spent time working in the cathedral during its construction.

At the cathedral on Friday night, Brian Crowley, curator of the Pearse Museum and St. Enda’s Park in Dublin, unveiled the mosaic and spoke about the life and work of James Pearse and his sons and the importance of their work  in the cathedral.

The specially commissioned mosaic is the work of artist Macola Vonga, who described the piece as consisting of three layers: William and Patrick Pearse in the foreground; St. Eunan’s Cathedral behind them; and a background in the colours of the Irish Tricolour.

Speaking at the reception following the unveiling, Macola said it was an honour for him to create the mosaic and to be part of the 1916 centenary commemorations.

The Cathedral Quarter Committee organised the event as part of Easter Rising centenary commemorations. The Conwal Singers sang several songs as part of the event, and Paddy Friel, chair of the Cathedral Quarter Committee; Cllr. Gerry McMonagle, mayor of the Letterkenny Municipal District; Brian Walsh of the Letterkenny Community Heritage Group; and Sgt. Major John O’Connor of the 28th Battalion based in Finner Camp, also addressed the audience.