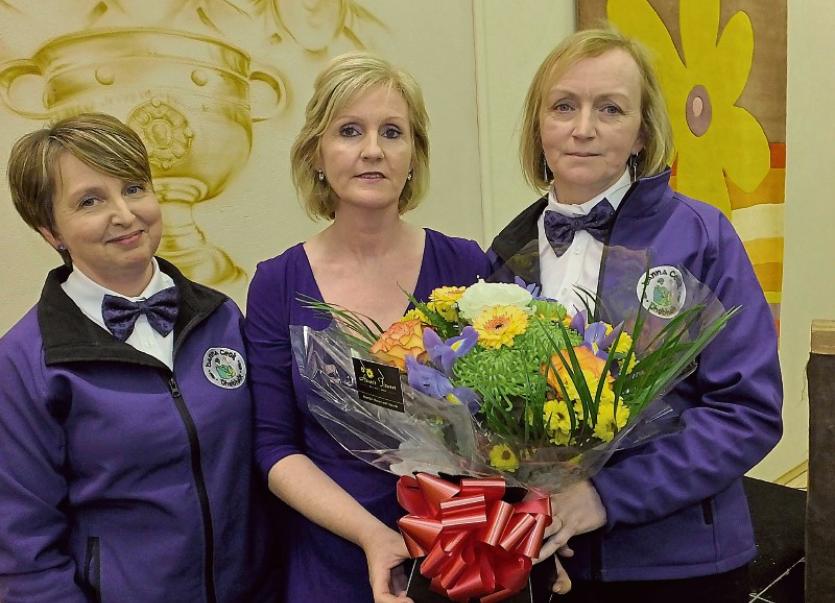 Ionad Naomh Pádraig in Dore marked two anniversaries last Friday week with an event to mark the 10th anniversary of the busy community centre and to commemorate the centenary of the Easter Rising.

The event began with a Mass celebrated by Father Brian Ó Fearraigh, CC Gaoth Dobhair. Banna Ceoil Dhobhair, who were in New York City for the St. Patrick’s Day celebrations there, were on hand to play a number of tunes. Well-known local man, Paddy Thadhaig McFadden, was given the honours to hoist the flag.

Afterwards, Noel Ó Gallchóir, writer, actor and former principal of Pobalscoil Ghaoth Dobhair, delivered a lecture on the heroes of the Easter Rising. Noel later unveiled a well-executed mural of Patrick Pearse on the wall of the centre’s large hall.

Cití Eoghain Éamoinn McGarvey of Dore was introduced as the new president of the centre. She succeeds Paidí Mheama Boyle, who passed away in recent months.

Mícheál Ó Domhnaill of Acadamh na hOllscolaíochta Gaeilge, Páirc Ghnó Ghaoth Dobhair, officially launched the ionad’s new history archives. The archives include a wide range of material, including photographs, historical documents and census statistics, and are open to the public for their use.

Later, a group of actors from Rann na Feirste were on stage to perform the drama, “Faoi Bhrú in Oifig an Phuist”, by actor and writer Niall Mac Eachmharcaigh, a star of the TG4 series, “Ros na Rún”. Their presentation can only be described as hilarious and highly entertaining from beginning to end.

The day’s celebrations and commemorations ended with a concert by the acclaimed Rann na Feirste musical family, Clann Mhic Ruairí.

“They were perfect celebrations that were open to everybody in the community,” Máire Uí Chomhaill, bainisteoir of the ionad said. “It was our way to say thank you for the amount of people who use the premises, who attend the activities and services that are provided here.

“It was nice for us to celebrate with the public,” she said.