A hammer dating possibly to the Bronze Age, found in Inishowen, finds a home at the Donegal County Museum 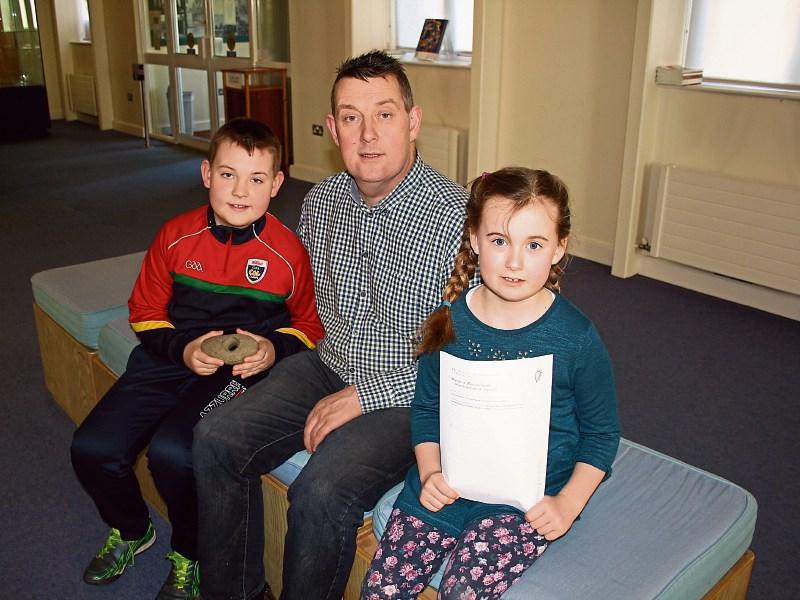 A Donegal family found an ancient hammer that may date back many thousands of years to the Bronze Age.

The Doherty family discovered the hammer in the Bridgend area and Charlie Doherty and his children, Aoife and Michael, brought it to the Donegal County Museum.

The county museum is a Designated Museum under the National Cultural Institutions Act 1999, which means artefacts turned into the museum can be kept there.

“No longer does material have to go to Dublin,” Caroline said. “It comes to us and stays in the county for the people of Donegal.”

The piece the Dohertys brought the museum is a nice, intact example, Caroline said. The handle of the hammer would have been made of bone or some organic material, and would have deteriorated naturally.

“You can see it has been used,” Caroline said. The piece will be authenticated before being put on display.

“It is actually in very good shape,” he said. Charlie was out working with a hammer and had tossed his hammer away; coincidentally he was looking for his own hammer when he came across its much older predecessor.

“It was just stuck in the ground – a circle with muck in the middle,” Charlie said. When he found he could push his finger through the centre of the piece, he realised its significance and looked it up.

Anyone who finds an artefact of archaeological interest is obligated to turn it in, under the National Monuments Act. Under the act, these objects are deemed to belong to the state, even if an artefact is found on a person’s own property.

Caroline said all artefacts and other archaeological finds help paint a fuller picture of the county and its history.

When she visits Donegal schools to speak about the museum and its collections, she defines archaeology in this way: “It’s a giant jigsaw puzzle with no picture on the front of the box and loads of pieces missing.”

Caroline pointed to analysis of an archaeological revealed last month as an illustration of the impact that archaeological discoveries can have on our understanding of history.

The new information came from an animal bone discovered in a County Clare cave nearly a century ago, but only studied last month. The recent analysis has resulted in a 2,500-year adjustment in the date that archaeologists believe humans arrived in Ireland.

Tests determined that it was 12,500 years old, and that it sustained visible cut marks made to the bone at the same point, which would indicate the presence of humans.

But prior to the study, the Mesolithic site at Mount Sandel, County Derry, was thought to be evidence of the earliest human occupation in Ireland, and that dates back about 10,000 years.

Dr Marion Dowd, a lecturer at Institute of Technology, Sligo, told The Irish Times that scientists had been seeking evidence of humans on the island in the Paleolithic period since the 1860s.

Caroline said people who come across an artefact may not be aware of its significance. “You might not think it’s very significant, but it is because it adds another piece to the big mystery jigsaw puzzle of the history of Donegal,” she said.