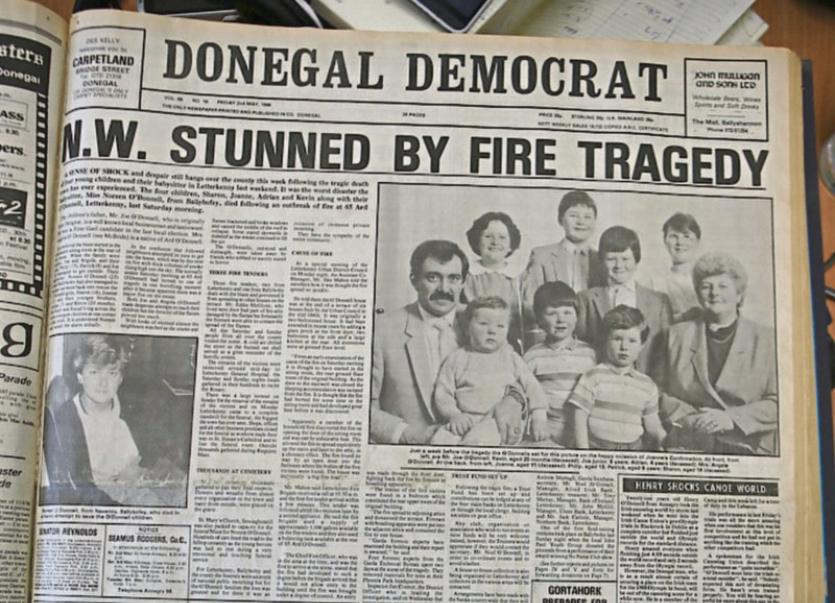 Looking forward, it seems an awfully long time. Looking back, maybe not so much.

Angela O’Donnell makes herself comfortable in the corner seat of the sofa in the sitting room at the family home in Leck, overlooking Letterkenny, as an overcast April Monday evening falls to darkness. In the middle seat is her oldest son, Philip, and across from her, her husband, Joe, fills the perch in front of the television.

Above the open fire hangs a family portrait of Joe and Angela and their seven children. It was taken on the occasion of Sharon’s confirmation, a week before the fire. In a few days, the O’Donnell family will attend a special Mass in memory of their four children - Sharon (14), Joanne (11), Adrian (3) and Kevin (13 months) - and their babysitter, Noreen O’Donnell, who died in the blaze at the family home. Angela pauses for a moment as she prepares to articulate where she’s at with the passing of time, and the unimaginable loss she and her family have carried for the last three decades.

“Sometimes it feels like a hundred years ago. And other days it seems like yesterday,” she says.

While April 26th is a date forever ingrained since 1986, there are many other times and triggers that bring the four lost children to the forefront of her mind.

“There are birthdays, there’s Christmas and family gatherings,” Angela adds.

Philip offers his take about how the passing of time has shaped his view on things.

“There are people who went to school with Sharon and Joanne, and it’s when you see them up the town with their children, or when you attend a wedding, you think about them,” he states.

She says it never takes an anniversary to prompt the memory of the tragedy, which, she says, is so crystal clear in her mind.

“It never takes a special day or a special time.”

She explains that they are sort of prepared for an anniversary, or birthdays, because they are aware they are approaching.

“But it’s the day you are not thinking about anything that it just hits you.

“You’re in here tidying up and you look at the picture and you think, ‘is that real?’ That recent tragedy in Buncrana and the fire tragedy last year in Dublin are triggers that bring it all back.

“I was out in Bridie and Thomas Keys’s earlier this evening and was sitting talking to the two of them. Thomas looked over at me and said, ‘Do you know what, I just think I’m looking at your Sharon’.

“We weren’t even talking about the children at the time. Their names would often come into the conversation,” she says.

Joe recalls what he heard when people were there to support and guide him and his family in the early days.

“People who survived tragedy or disaster were told it would get easier. And it does. For the first months and years you just never ever thought it would get better. But it does. You do learn to live with it, and cope with it. I was talking to somebody recently about the days the coffins were in the mortuary and he said there was no doubt about it, God was there that day. The feeling of peace and serenity that was there was something special.”

Letterkenny was a much smaller town when the terrible tragedy struck. Despite its growth, it has, for many including Angela, remained a small town to a large degree.

“It’s still very parochial. Townies are townies. This town at the time was unbelievable to us and you never forget that,” Angela adds.

Sean and Sadie Doherty, another couple Joe and Angela are close to, took the O’Donnell family in, the morning of the fire.

“We had literally nothing. We had no clothes. Within a couple of hours, we had everything we needed in terms of material things. The only thing that was missing was the children,” she says.

In the initial aftermath of the tragedy, Philip, who was 13, remembers not wanting to be involved in anything that was happening.

“I didn’t want anything to do with anything that was going on - didn’t want to be near removals or funerals. I suppose my thinking was, ‘if I don’t get involved this isn’t happening’. I was coaxed to go to the mortuary. Tommy Keys was with me in the house and he eventually got me talked into the car. I then went down into the chapel. Something happened that evening in the chapel. I can’t explain it.

“I came out of the chapel feeling different, I don’t know what it was. From wanting to have no part in it to coming home and asking if I could carry a coffin was a big change. Where that came out of, I don’t know. I’ve retained that sense of peace and contentment since,” he explains.

“I would have been very angry about the whole thing, too,” Philip adds.

He says it wasn’t until his son, Matthew, was born five years ago, that he realised the effect the loss of his four siblings had on his parents. The tragedy, Philip says, had possibly even a greater impact on him when he became a father.

“Coming up to the anniversary I found myself asking myself how I would cope if something happened to Matthew,” he says.

According to Angela, her second son, Paddy, who was aged eight at the time, has never spoken about the fire.

“That’s the way he’s coping with it. Having said that, he would head down to the graveyard on his own and would tell no one where he’s going.”

It’s 23 years since the O’Donnells moved to Leck, just across the road from the cemetery where Kevin, Adrian, Joanne and Sharon rest in peace.

“People say to me we were mad when we moved out here so near the graveyard. But it wouldn’t really matter where you’d go - you’re always close to them. No matter where you go in the world, you take your memories with you. The one thing people can never take from you is your memories. The children all had their wee different personalities.”

Invariably, the conversation and the eyes in the room all turn to the family portrait.

“We hadn’t even got the photograph when the fire happened,” Joe remembers.

“Dermot Donohue took the picture and the first time we saw it was when he took it out to us after the fire. It was great to have a picture of us all together and a coincidence that it was taken just a week before,” he adds.

“You can only grieve on your own,” Joe comments.

“There are days I’d be good and Angela would be bad, or there are days when I’m bad and she’s good. You can create a resentment. I think that was the most important thing to realise about grief. A lot of cliches help as well. The late Mrs Coyle from Wolfe Tone Place told me: ‘It’s a poor house that God doesn’t call on. And you’re definitely a millionaire.’

It’s wee things like that that make you sit up and think about the whole thing,” Joe states.

“And then we were lucky when Noreen came along. Noreen was born the year after the fire. Noreen brought us a lot of happiness and a lot of joy. I suppose it was a bonus that she was a girl.”

Noreen was named after Noreen O’Donnell, the babysitter who perished with the four siblings Noreen never saw.

“It was Joseph (Joe Joe, the youngest of the three surviving children, who was six at the time) who told Noreen all about Sharon, Joanne, Adrian and Kevin.”

Life in the O’Donnell household is lived with the one-day-at-a-time approach. Always.

“We’re very content, thanks be to God. We’re luckier than most to have that and it’s something you can’t buy. Sure what do you want - a bite to eat, a welcome at the door and a bit of heat.

“We embrace life every day and enjoy it. We have three grandchildren now and we enjoy them.”

An anniversary Mass to mark 30 years since the tragedy will be held in the Church of the Irish Martyrs on Saturday morning at 11 o’clock.

“We are making it a wee bit special because it’s 30 years. Some of Sharon’s friends and Joanne’s friends are coming and will do readings and prayers of the faithful. It’s nice for them to remember, as they do all the time.

“You go down to the graveyard and there’s always a wee bunch of flowers there.

“All the family and friends are gathering for it and anyone who wants to come to the Mass is very welcome.”

As the days draw closer to the anniversary, Angela says she still has the same feelings she had back then.

“It’s as vivid now as it was 30 years ago, really. I don’t think that will ever change. We had good friends and family to support us and help us get there. Without that it would have been a lot harder.”