Donegal and NY firefighters mark the bonds that join them 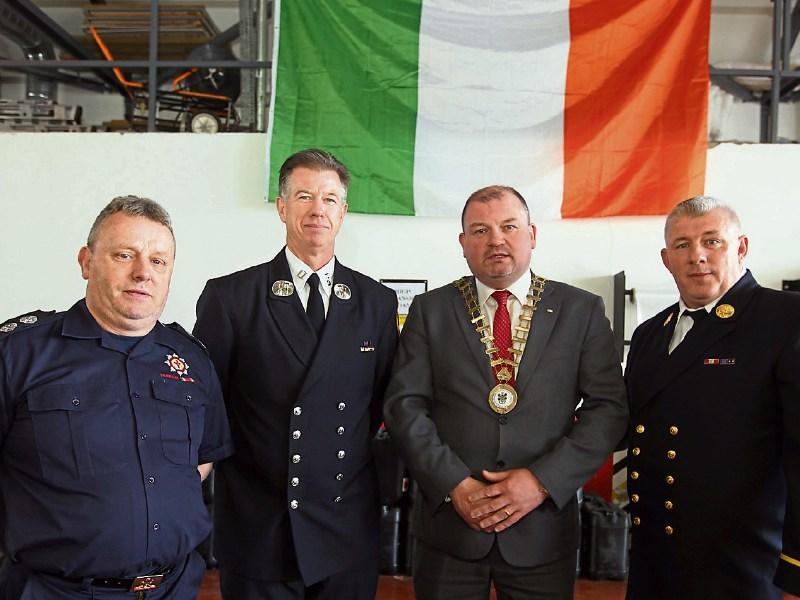 Separated by 3,000 miles but united by something much deeper, firefighters from New York City and Donegal came together in Donegal last week.

The New York firefighters were in Donegal as part of 1916 commemorations that saw them take part in Croke Park events yesterday.

Hosted by the Donegal Firefighters Association, in participation with Donegal County Council, the firefighters over two days took part in a number of public events in the county, including a soccer/football match in Letterkenny on Friday, where the visiting team also made a donation to the centre.

There were strong Donegal connections among the visitors.

New York Fire Department Captain Edward Boles has spent many holidays in Donegal from when he was a young child – his mother, Kathleen McGee, was from Glenleighan, Fintown, and he still has family here.

Addressing a gathering at the Letterkenny Fire Station on Friday, Captain Boles said the New York firefighters were in Donegal in solidarity with the Donegal Fire Service, to celebrate their profession and to commemorate the sacrifices of the men and women of 1916 “who fought to have that flag fly at this firehouse”.

He described the welcome Donegal Fire Service provided as “above and beyond anything we could have imagined”.

Mark O’Brien of Cherrymount, Ballyshannon, has lived in New York since 2007 and joined the New York City Fire Department in 2013, now with Station 3 in the Bronx. He loves his work.

“It is a great brotherhood,” he said. “We all take care of each other.”

Mark played Gaelic for Ballyshannon and plays for St. Raymond’s in the New York GAA. He also plays the tin whistle in sessions in New York and brought his whistle with him on the trip.

“It’s brilliant to be able to bring these people home and show them my home county,” he said.

Robert McGinty, a firefighter in Ladder Company 33 in the Bronx, is also no stranger to Donegal - his grandfather John was from Ballybofey and he has visited the county many times, several times this past year alone.

“We appreciate the many challenges you face on a daily basis,” Cllr. Brogan said, as those in the fire station gave the firefighters a round of applause.