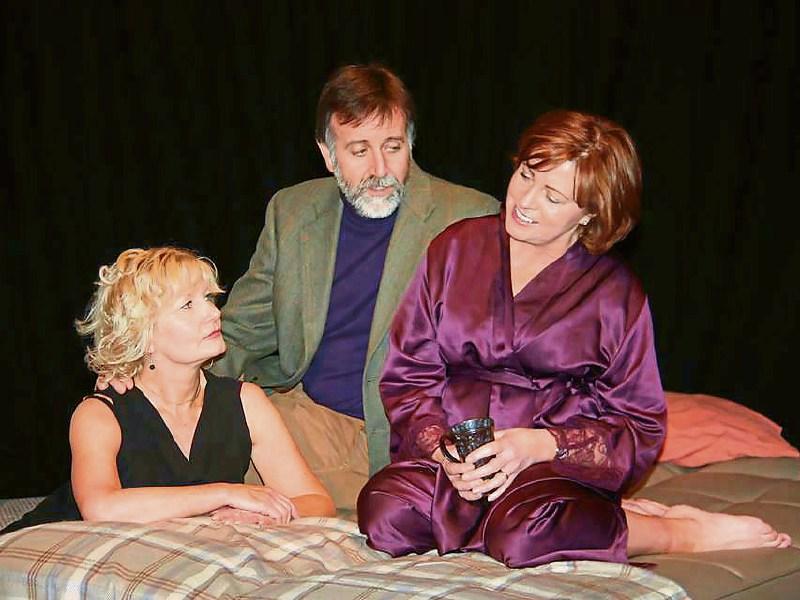 Ballyshannon Drama Society return triumphant from the festival circuit with a final performance of Old Times before the All Ireland Finals.

The Abbey Arts Centre in Ballyshannon is hosting a Gala Night this Saturday, April 30, complete with music by John Mc Neill and Lorraine Walls, wine, finger food, and, of course, the last local presentation of the Harold Pinter classic.

The play, directed by Conor Beattie, features Rachel O’Connor as Kate, Richard Hurst as Deeley and Trish Keane as Anna.

The story is set on a late summer’s eve when husband and wife Deeley and Kate welcome Anna, Kate’s old friend and flatmate, into their home.

Over the course of the evening, and many brandies, the trio recall the old times in London, 20 years earlier. It soon becomes obvious, however, that not all memories are recalled equally, leading to tension and questions for everyone…including the audience.

Old Times is considered by many to be one of Harold Pinter’s finest dramatic creations. First produced in 1971 in the Aldwych Theatre in London, starring Pinter’s first wife Vivien Merchant, the play has rarely been out of production since, and is currently enjoying a high profile revival on Broadway, starring Clive Owen, Eve Best and Kelly Reilly, with a score by Radiohead’s Thom Yorke.

This production also marks a return to Ballyshannon for Harold Pinter, who performed in the town in 1952 as part of Anew McMaster’s touring company.