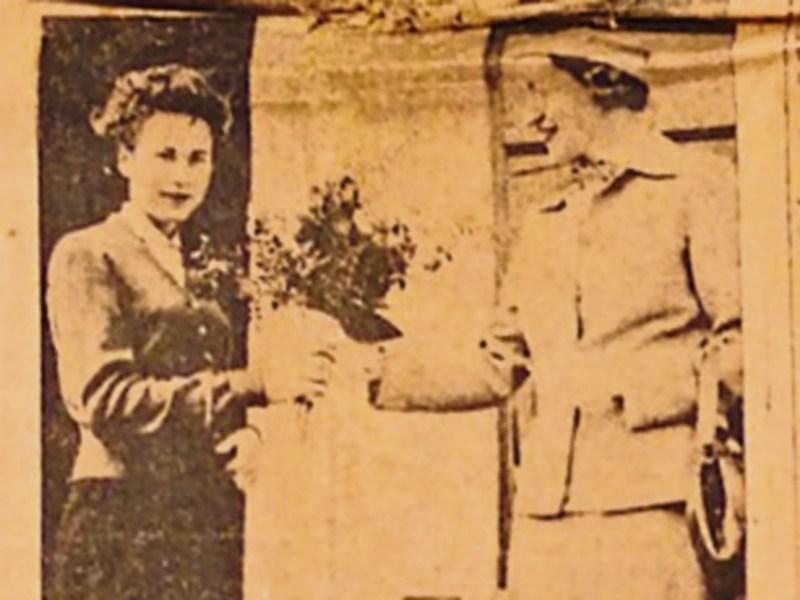 Our mother Maureen Timony (nee Mary Ellen McIntyre) was born at home on the family farm in Dromore between Ballintra and Rossnowlagh on April 26, 1935 to Catherine and Michael McIntyre. Maureen was the eldest of five. Four girls - Ann, Bet,and Isabel - and one boy Paddy. Their dearly beloved brother Paddy who passed away from pneumonia at the age of nine in 1950.

Maureen had many fond memories of growing up in Dromore and Ballintra, and often talked about times gone by, and of her family, friends, cousins, and neighbours in and around Dromore.

Maureen completed her education in Ballintra and Ballyshannon, then worked as Cecil King's’ secretary in the original Ballyshannon offices of the Donegal Democrat in the 1950’s. Beside her work as Mr King's secretary, she also contributed short pieces of her own. Maureen used to reminisce about her boss Cecil King, the former editor of the Democrat, as a hard but fair boss and a good man to work for. She also worked with the father of the current editor, Michael Daly, of the Democrat, and an old photo of the then staff of the Democrat was highlighted in the November 28, 2013 issue of the paper. She also said that the place was abuzz with activity and a great place for a young woman to work. One highlight of this period was when Maureen was selected to present flowers to the US Ambassador’s wife, Mrs Scott McLeod, who was touring the Donegal Democrat with her young son Danny McLeod.

After a happy engagement, Maureen married Alfred (Alfie) Timony of Donegal Town. She left her job at the Democrat and moved to Bridge Street, Donegal Town where Maureen and Alfie lived in the Timony family home and where Maureen helped care for Alfie’s elderly Mother. Alfie and Maureen had three children; Gregory, Jean (Jeannie), & Michael (Mick). Alfie passed away in 1976, leaving Maureen to raise her three young children. This was followed by the loss of the family home in a fire in 1983. She eventually moved to Drumrooske Estate where she lived until her passing.

In between life’s sadnesses and traumas, Maureen had many happy times in her new home at O’Duignan Avenue, Drumrooske, where she lived her final 33 years. In particular, she always looked forward to the visits of her children with whom she spoke nearly daily, and visits from her son Gregory, who visited from Dublin every fortnight.

Maureen was an intelligent woman, read the daily newspaper from McNulty’s shop, and posted each and every copy of the Donegal Times to her son Michael in Boston.

As President of the Donegal Town branch of Irish Countrywomen's Association (ICA) in the mid-1980’s, she helped run the first coffee shop at the Donegal Town Craft Village. This included daily baking her delicious strawberry cheesecake, and scones.

Maureen was also a dedicated member of the Legion of Mary, where she had many friends and found much solace. She was well read and devoted to religion, and daily read her many prayer books and religious pamphlets. She also enjoyed trips to Rossnowlagh with her friend Teresa, and with her son Michael when he was home from America.

Maureen had never travelled much further than Dublin but in the 1990’s she and her daughter Jeannie (Jean) visited Michael in Boston. They toured the city, walked along the banks of the Charles River. It was there that Maureen first experienced Indian Food, and tried to understand the Boston accent! Maureen also got to visit the Adirondack Park in New York State where she experienced German food at Saltzman’s Restaurant, and visited the Adirondack Park Museum at the beautiful Blue Mountain Lake.

In 2001, she visited the Shrine Of Medjugorje in Bosnia with one of her dearest friend Teresa Neely, and a tour group from Donegal.

She found the trip long, but spiritual, and remarked at how friendly the people were and how serene the experience was.

Despite her age and physical ailments, she strived to maintain an active and healthy life in her later years. Her favourite walk was past Ard na Bratha to the bypass which she did nearly daily. She also enjoyed Donegal Town’s cafés and, after a long walk to SuperValu, she enjoyed watching the town go by while sipping tae in the Abbey Hotel Lobby. She loved shopping in Sean McGinty’s shop on Main Street where she often bought adorable clothes as treats for herself or for her daughter Jeannie.

Maureen spent much of the latter part of her adult life fighting depression, an ailment that affects many in our society. This was her hardest struggle and it is difficult for the non-­sufferer to understand. Yet despite it all, she still had breakfast ready when the kids went to school, or dinner ready when they arrived home from Dublin, Cork, or Boston. The major influence in our lives, we shall always remember her and pray that she finds eternal peace and happiness. She always hoped to be re­united with her loved ones, especially her mother Catherine, wee brother Paddy, and her ever­loving husband Alfie, and we pray that she is happy and carefree.

The Month’s Mind Mass was celebrated at Killymard Chapel on Saturday May 7th at 7.00pm.

Our picture shows Maureen presenting the wife of the American Ambassador with flowers on a visit to the Democrat offices in Ballyshannon.