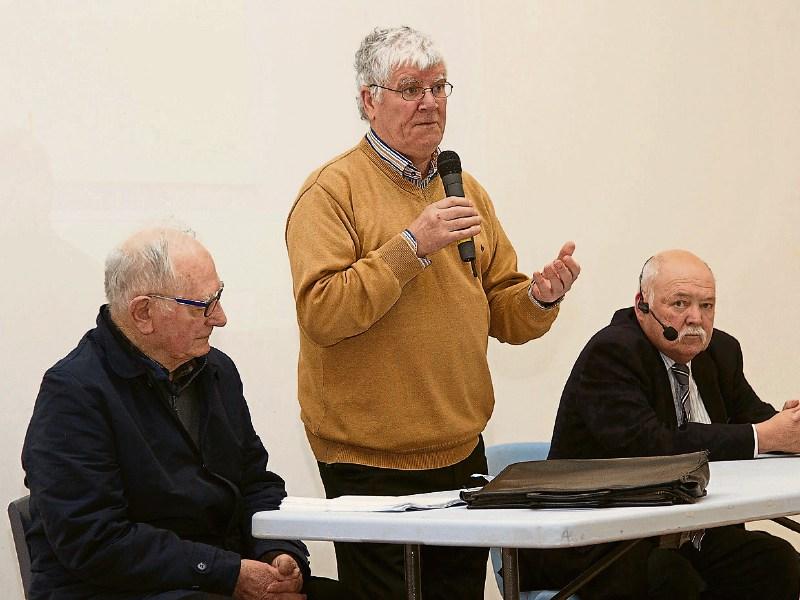 A leading Fermanagh historian has slammed the decision of the ESB to demolish a famous local castle in a major local development in the 1940s.

Dramatic footage shown in Rockfield Community Centre shows the blowing up of Camlin Castle, home of the Tredennick family for almost three centuries in the late 1940s.

The castle was blown up, as the Erne river was widened and deepened as the ESB set up two hydro electric stations at Cliff and Ballyshannon.

Belleek-based historian Joe O’Loughlin told a packed Rockfield Community Centre that there was no need to put the ancient castle under water.

“Camlin Castles was one of a number of fine buildings like Cliff House and Laputa that was demolished in the name of progress.

The thinking at the time was that it needed to be submerged in water, and the Erne Scheme and the ESB provided good and well paid employment for the South Donegal area, Mr O’Loughlin said it was not necessary to destroy the old castle.

“Nothing remains today except the very impressive entrance to the castle”.

“And sadly the sound of the river was replaced by the hum of the turbines a bit like the large wind turbines of today.”

Incidentally a major wind farm to be located at Derryhillew, 800 metres from the Fermanagh border has attracted some opposition from the Belleek area.

Mr O’Loughlin said the same could not be said about the background to the erection of the electrical turbines where the landscape was changed forever.

Mr O’Loughlin went on the give a detailed account of the Tredennick family and their impact on the area around Belleek/Ballyshannon.

He also gave an interesting account of the family’s connection with the Keenaghan Graveyard that he and Joe McGee were instrumental in renovating in recent years.

The historian traced how the Tredennick family bought large tracts of land from the Connolly estate on both sides of the River Erne and they also built local big houses like Templenew, Fort William and Cherrymount and were most benevolent landlords. He was speaking at an event organized by the Teigh Tunney graveyard Restoration Committee at a packed Rockfield Community Centre.

Secretary of the group Brendan Gallagher, told the gathering that a committee had been formed to erect a new gateway into the graveyard that dates back over 400 years.

Both Roman Catholics and Protestants were buried in this graveyard that is located near Cliff Power Station half a mile from Belleek and three miles from Ballyshannon.

Several families from Belleek, Bonahill and surrounding areas are buried including the Kelly family from Corlea (Ann Kelly is very active in tracing this heritage) Gallagher’s of Keenaghan, Dolans from the Commons, Nealons and the Tredennicks who have a famous vault in the graveyard that was also the scene of a famous battle between Hugh O’Neill and his brother-in-law Henry Bagenal (O’Neill eloped with Bagenal’s sister Mabel and she was his “third bean cheile”) against the Maguires and the O’Neills in the early 1590s.

Mr Gallagher, Anthony McCauley, George Naylor, Robbie Likely, Robert Johnson, James Gormley are part of a local committee who are keen to carry on the restoration work originally carried out by the late Patsy McCaffrey and Sean McCauley in the recent past.

Meanwhile another eminent Belleek historian John Cunningham gave a very witty account of the wider historical context of Teigh Tunney from Medieval times to the present.

Mr Cunningham gave a comprehensive and witty account of the growth of the monastic life on the banks of the old Erne waterway, Fermanagh’s original “M1” according to the erudite and laconic Johnny.

These monks were “muscular Christians” who often went to war with other monasteries for matters of Mammon far removed from he God they worshipped.

Teigh Tunney was also the location of an old abbey that was run by the Cistercians, who were also to be found in the Abbey Assaroe Ballyshannon, Keenaghan and Slawin.

Mr Cunningham also explained how Ballyshannon was sometimes known as Ballynamanagh or “The town of the monks” and how the Yew Tree that is so common in Teigh Tunney and other graveyards has properties that can help in the fight against cancer.

The most informative evening ended with a raffle that made E390 and Mr Gallagher thanked the large crowd for attending.

Our picture shows: The two speakers on the night Joe O Loughlin and John Cunningham being introduced by Brendan Gallgher, Chairman.