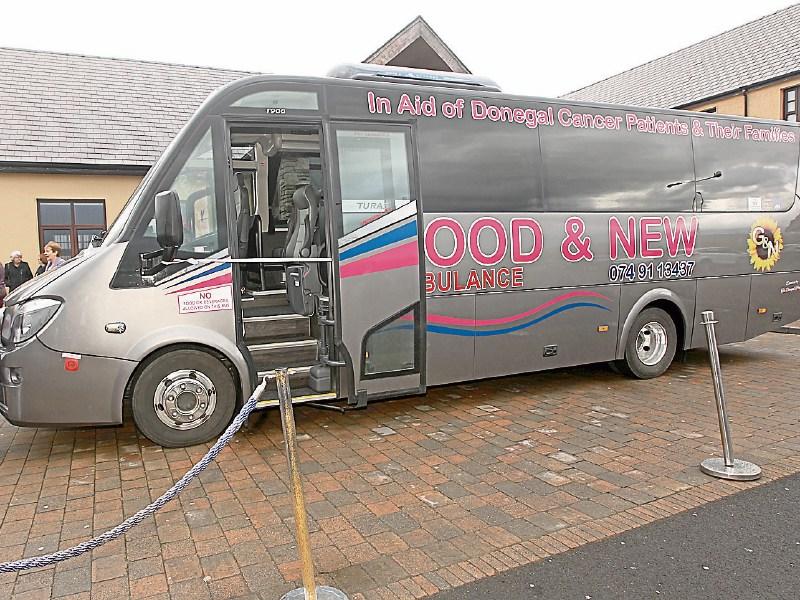 Donations from people across Donegal have funded a new bus to transport cancer patients to Galway for their treatment.

Last week, the new Good and New charity cancer bus was launched in Letterkenny, at the Silver Tassie Hotel.

Catherine McGuinness, a fundraiser for the cancer bus service, said the bus may not shorten the journey for cancer patients, but at least it will make it more comfortable.

The cancer bus leaves Donegal for Galway early every Monday morning and returns patients from Galway to Donegal every Friday. There are also feeder buses that bring patients from Inishowen, Fanad and west Donegal to collection points in Letterkenny and Donegal town, where they are collected by the main bus.

Eamon McDevitt said the service began seven years ago with volunteers using their own cars to transport patients to Galway. As the number of patients and the numbers of cars needed to transport them rose, the organisation moved to larger vehicles. They first purchased a nine-seater and later a 22-seat bus that was in service until the newly launched bus replaced it.

The new 33-seat bus, with reclining seats, has been on the road the last couple of weeks but was officially launched last Wednesday.

Ann and Patsy McHugh, fundraisers for the service, cut the ribbon at the launch of the new bus. Father Hugh Sweeney of Glenswilly blessed the bus. Nancy Moore, a director of the charity, also took part in the launch.

Eamon said his wife, Lynn McDevitt, also a founding member of the Good and New Charity, was an inspiration.

“There wouldn’t be a stone left unturned if she felt that she could get help for a cancer patient,” he said.

The trip from Letterkenny to Galway takes about four hours, though patients taking feeder buses from other parts of the county may travel an hour or more before the Galway bus leaves Letterkenny.

“It’s a lot when you’re well,” Eamon said. “Combine that with people who have just gone through a week’s cancer treatment.”

Eamon said the cancer bus service receives no funding from the HSE or government, or from the Irish Cancer Society.

“All our funding comes from the local people doing fundraising,” he said. “To be quite honest, quite a large number of patients who use the bus will do fundraising for the service.”

Eamon said it costs about €1,000 a week to keep the service on the road.

Money for the new bus has been raised by Donegal people, Eamon said.

Pictured: Kathleen McGuinness (right) handing over the keys at the launch of the new Good & New Cancer Bus to Alma O'Donnell and Lynn McDevitt at the Silver Tassie last week.