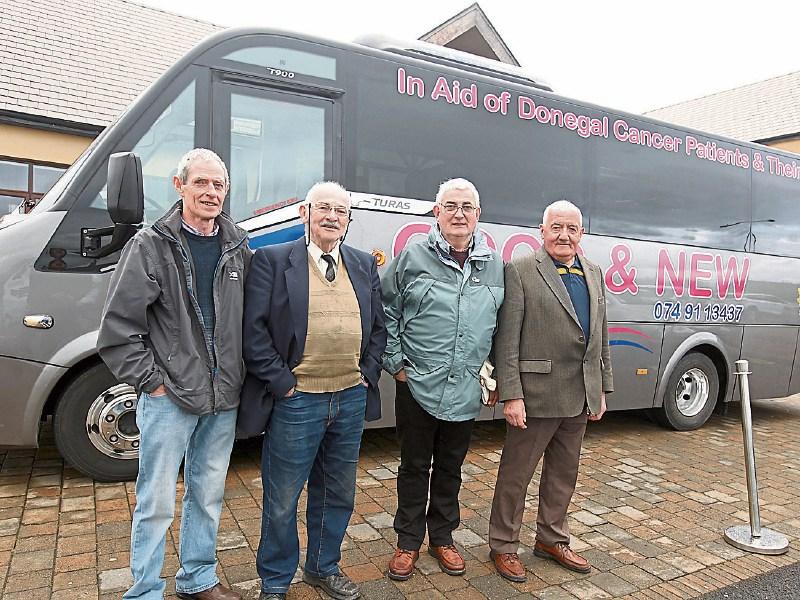 They gathered from all over Donegal outside the Silver Tassie Hotel, Letterkenny, on Wednesday evening of last week to officially launch the new Donegal Cancer Bus.

Many familiar faces who had used the bus were there along with the numerous supporters and fundraisers who have been touched and inspired to support such a worthy cause.

The brand new bus with its increased capacity and comfort, was very well received.

With threatening clouds, Master of Ceremonies and sometimes comedian, Fergus Cleary, got the official launch underway.

The tape was cut by Patsy and Ann McHugh, Inver, long-time fund-raisers, while another tireless worker, Kathleen McGuinness, Killybegs, handed over the new keys to the bus.

“It’s amazing how things are going. It’s back we are going. But people from north, south, east and west of Donegal together to raise money for this bus; it’s a great achievement,” said Kathleen, who commended all those involved in providing the service in getting Donegal patients to Galway.

“As everyone knows the service is free but it doesn’t run on air. In all my years involved, I am just amazed at the generosity of people in Donegal. I’m asking people to keep supporting this worthy cause; we just don’t know which of us would be next on it,” concluded Kathleen.

The bus was blessed by Fr. Hugh Sweeney, Glenswilly, while the launch was also addressed by the chief organiser of the charity, Eamon McDevitt, who said he was very honoured to see so many people present.

“When I look around I see people who have been raising money for a very, very long time. This bus came from the people of Donegal,” said Eamon, without any help from the HSE, Irish Cancer Society, etc.

“The decency of Donegal people of the last seven years has been phenomenal,” said Eamon, who praised Kathleen McGuinness, who spearheaded the funding campaign for the new bus.

Indeed, before the assembled went inside the Silver Tassie for refreshments, five cheques from different fund-raisers were handed over to Eamon McDevitt for the cancer bus charity, The Good and New Cancer Charity.

The new bus is already in operation and if you see it on the road from Donegal to Galway between 6.30 and 10.30 on Monday morning or on the return journey around noon on Friday evening, give them a wave.