Unique walk into the light from Fermanagh into Donegal 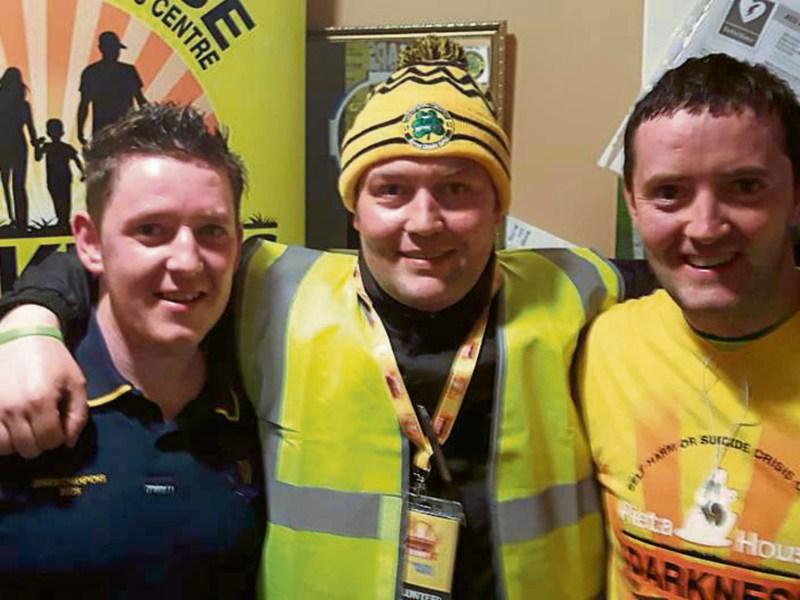 A cool pre dawn breeze swept across the border country between Belleek and Corlea as around 1,000 hardy souls gathered to take part in an historic and memorable cross-border walk.

It was all in aid of the Darkness Into Light programme and you could almost feel the goodwill and bonhomie as local DJ Gerard Maguire got the huge crowd limbering up with some stirring disco music.

From 3.30 am onwards people from Ballyshannon, Bundoran, Kinlough, Belleek, Garrison and Derrygonnelly, to name just a few areas, gathered at the spacious Erne Gaels GFC ground for the beginning of the walk.

This cross border walk was pretty unique as it was the only one if it’s kind in the country.

Every walker paid £20 to register and was given a yellow T shirt with the words Darkness Into Light in big bold letters.

And then at 4.15am local PP, Father Tiernan Beggan and Church of Ireland Vicar Rev Ngozi Njoku cut the tape and the walkers set off on the 3.6 mile walk around the border.

And that set the scene for a long yellow line of walkers, some of them carrying bright candles of hope as they strode confidently into a Donegal/Fermanagh dawn.

The route took the walkers, who included a high proportion of families and many smiling children down the Main Street of Belleek before turning left at Rooney’s Corner and heading for Corlea.

There were well-lit marshals at every turn of this lovely border circle with well lit tractors, stand by medical facilities and lit candles along the route.

Slivers of dawn were stealing in when the walkers turned right at Corlea’s Crooked Bridge and well known Mulleek musician Tom Flanagan was playing a rousing version of “Sean South” as we headed for Bonahill/Derryhillew and Frank Dolan’s Lane.

A big hill had to be scaled at Dolan’s Lane and then it was a nice flat walk along the Commons back to the GAA grounds as we walked into the light of a lovely dawn.

The walk took around an hour and 15 minutes for most of the walkers although Erne Gaels manager Maurice McLaughlin and Fermanagh GAA PRO Pauric McGovern were among a hardier core of runners who landed back at the GAA Centre for a heavenly cup of tea.

All of the walkers were then treated to bottles of water, tea scones and biscuits in the GAA Centre where a successful raffle was held.

It was a very special night for the local Erne Gaels club as its popular club chairman Declan McCaffrey had won a Club Volunteer Award for small clubs at a ceremony organized by the Irish News in Belfast earlier on Friday.

Declan is also a driving force behind the Darkness Into Light campaign and is also a tireless promoter of mental health issues.

And it was a special morning also for the tour de force that is Bernie McNulty who celebrated her birthday, in between making sure that this mega event ran smoothly.

The walk, which was one of scores taking place all over the country, attracted over 120,000 nationwide to raise funds for Pieta House, a voluntary organization that does so much to combat the effects of suicide in Irish families.

Pieta House organizes this annual event to remember those who died by suicide and to raise awareness of depression.

The pre dawn 5 km is a symbolic event that ends as the dawn’s first light is breaking.

It was held in 100 locations all around the country.

“Words fail me, it really was a very emotive and humbling experience and it showed this larger community in a truly great light.

“And the fact that around 1,000 people turned out in Belleek at 4.15 am in the morning sort of speaks for itself.

“There was a wonderful cross-border, cross-community spirit, the weather was superb and where else would you hear the cuckoo.

“It really surpassed all our expectations and everyone was so supportive.

“It took a lot of hard work and organizing, but seeing all those people from a truly wide area in the early morning was just so inspiring.

One of the busy Bernie’s next goals is to try and get a Pieta House going in Letterkenny.

But for now she is “recovering from last weekend”.

“And maybe next year will be even bigger”!