Located after she managed to make a brief phone call Sheila Southgate (61) spent more than eight hours trapped in an overturned car down a 40foot drop when her car went off the road between Cranford and Carrigart on March 11th. She spoke to Declan Magee in the hope that measures will be taken to make the road where the accident occurred safe. 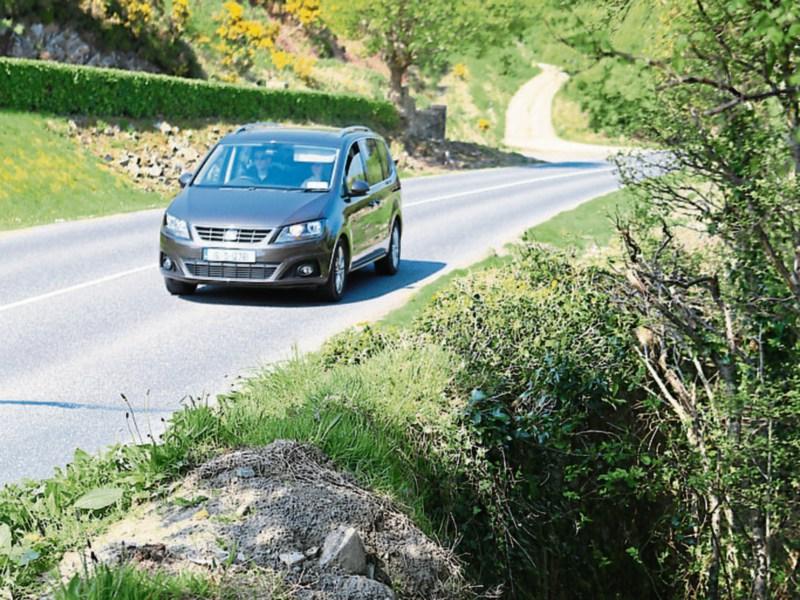 A woman who spent more than eights hours trapped in an overturned car down a 40ft drop has called on Donegal County Council to take measures to make the dangerous bend where she left the road safe.

Sheila Southgate (61) was only located after she managed to make a brief phone call to her husband who had been searching for her for four hours after her car went off the road between Cranford and Carrigart on March 11th.

Sheila was unconscious for much of the time after the car left the road at the Pans and overturned as it dropped more to the shore. The car was not visible from the road and it had left no signs of what had happened.

Sheila’s husband drove past the spot four times without realising the car was there.

She spent ten days in hospital following the incident but says she is very lucky to be alive and wants to warn others of the dangers of the bend and ensure something is done to make it safer.

Sheila and her husband Leonard believe a crash barrier should be erected at the spot and signs put up to highlight the danger.

Locals says Sheila's ordeal is one of at least three incidents in the last two years when cars have left the road at the bend.

All three cars left the road at the same place

All three cars were travelling from Cranford to Carrigart and left the road at the same place.

Local councillor Liam Blaney has raised the issue with Donegal County Council and the council says it will assess the stretch of road.

Sheila was driving from her home in Ramelton to work in Carrigart when the accident occurred.

Her Suzuki Ignis was taking the corner when she saw a car coming in the opposite direction which had crossing the white line. After she swerved to the left to avoid it her car crossed the lane and left the road.

“All I remember is seeing a tree and next thing I came too and I was upside down in the car,” she said.

Sheila was unconscious for most of the time and could hear her phone ringing in the backseat.

She started to get cold and managed to drag herself into the back to the car and phoned her husband.

“I said: ‘I have gone off the road just past Cranford'.”

She was also lucky to get a phone single. “No one else can get a signal there and I got one down there.”

Leonard, a taxi driver, knew where Sheila was talking about and drove to the scene. "I looked over the wall and there was the car 40ft down on its roof. I scrambled down through the barbed wire fence and bushes and branches.”

When he arrived at the car he saw his wife’s shoe lying outside it.

“I was very shocked. I scrambled down as quickly as I could. She had her hand out the window and I asked her could she move her fingers and she could. She was sitting with her head downwards and was freezing cold.

Her sisters were shocked and were screaming

“Then her two sisters turned up and were screaming. It was the shock of seeing it."

After the emergency services were alerted it took two hours to remove Sheila from the location. They had to cut their way through the undergrowth to bring Sheila out beside the bay as they could not take her back up to the road from where she was.

It was 7pm when she was removed.

Sheila suffered multiple broken ribs, a broken sternum, soft tissue damage to her neck, severe concussion and bad bruising to nerves behind both eyes - which means she has to wear an eyepatch.

Despite the injuries, she believes she was very lucky.

Locals say a car went off the road at the same location in 2014 and another went off just a few weeks after Sheila’s incident, in April, although neither incident was as serious as Sheila’s.

“I would not like it to happened to anyone else,” she said. “This is not about me, it is about the next person. The fact that no one can see you from the road - that is the scary part of it. You just assume that if you have an accident someone will see you. The fact is that if you swerve to the left and you are dragged across to the right, that is the danger. I am really thankful that another car was not coming. A mother could have been taking her children to school and I would have been stuck there in the middle of the road.

“I'd just be very keen that it does not happen to anyone else. I know I was so lucky because you hear of such tragedies.”

Picture: A view of the massive drop along the road side near Cranford where cars have crashed and ended down the banking.