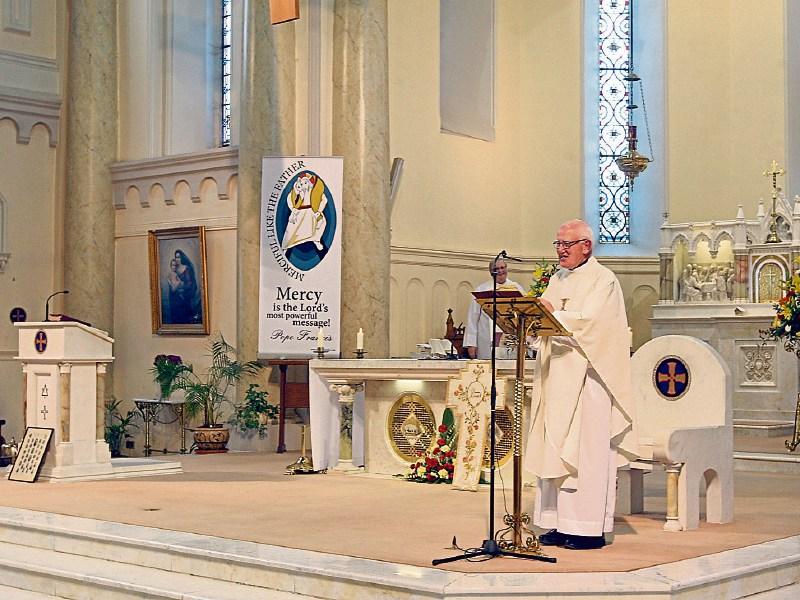 Father Dermot retired to his native Ballyshannon 10 years ago, but has been a very active and valuable help to parishes all over South Donegal and into Fermanagh.

He was born in Ballyshannon in 1941, where his father Richard Burke was a bank manager.

The family moved to Gorey in County Wexford when the then Dermot was only nine, and later moved to Dublin.

He went to St Kieran’s Diocesan College in Kilkenny and was ordained as a priest by the late Dr Birch to the diocese of Ossory in 1966.

Father Dermot then went to work in the parish of Hexham in Newcastle in the north east of England where he spent all of his ministry before coming home to his native Ballyshannon in 2006 and has been a very active figure around the town, excelling at golf, according to parish priest Father Cathal O’Fearrai.

Father Burke told the huge crowd that it was a Mass of celebration and he thanked God for allowing him to survive to celebrate 50 years as a priest.

Fr Burke introduced a friend of his called Father Tom Burke who had “soldiered with him throughout the years” and had come all the way from Derry to celebrate his Golden Jubilee.

In a moving and humble homily, Father Burke talked about a picture of the chalice and the host that, to him, represented the Mass.

“I see myself as the weak person and I ask God for his help in my priesthood.

“God must have had confidence in me and despite my handicaps and weaknesses, He has kept me in the priesthood for 50 years”.

“In my first nine years I was formed in Ballyshannon with my brothers, Liam, Bobby and Richard and one sister Una who had a great care for me as only big sisters can do.

“I am delighted that she is here today with two of her daughters and two of her six grandchildren.

“I must also remember Anthony and Lizzie McGinley who were like a second family to me.

“The nuns prepared me well for my first Holy Communion, a day I treasure and remember well”.

“But among all my friends, I roamed a happy boy on the winding Banks of Erne.

“I came back to Ballyshannon 10 years ago to a very warm welcome and I want to thank Fr Cathal for allowing me to be myself”.

In paying tribute to Father Burke, Father Cathal O’Fearrai said he was a wonderful asset to the parish.

“He is a very popular priest with everybody and he is a very active force for good”.