The central figures in the early days of the development of Coláiste Uladh were also prominent leaders of the 1916 Easter Rising. 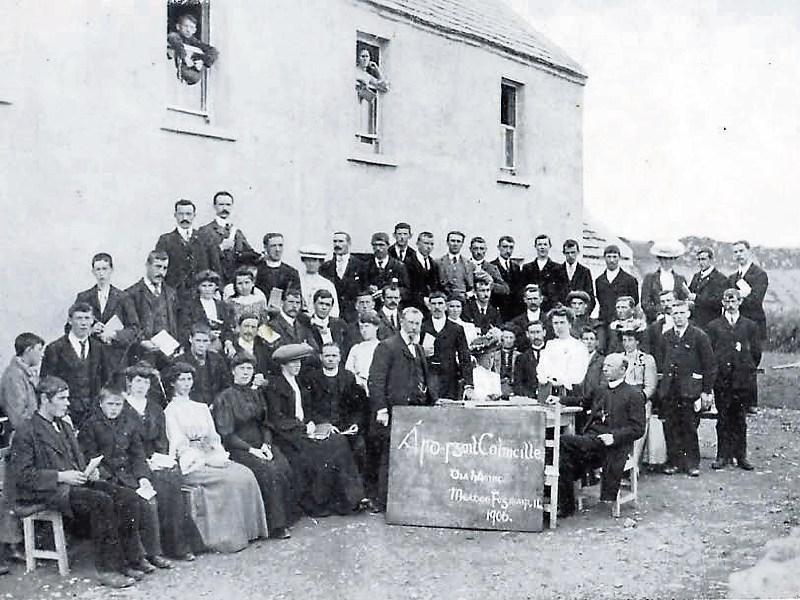 Gortahork hosted events over the weekend to mark the strong association Coláiste Uladh had with three of the Easter Rising leaders.

Coláiste Uladh was established in Gortahork in 1906 to help foster and revival of the Irish language and culture which was taking place countrywide at the time.

The central figures in the early days of the college development were also prominent leaders of the 1916 Easter Rising. They were, Pádraig Mac Piarais, Joseph Mary Plunkett and Roger Casement. The weekend was preceeded by a number of events held on Thursday evening.

A parade led by Cloughaneely Band took place from the Church of Christ the King up to Coláiste Uladh. There were a number of stops for street plays based on Mac Piarais, Plunkett and Casement.

The first stop was opposite the old cemetery where Constable Charles McGee a native of Inis Bó Finne is interred. He was the first member of the R.I.C. to have died in the Easter Rising. His great great grand niece, Aoibhínn Ní Bhriain gave a talk about Constable McGee’s life. The procession then proceeded to the grounds of Gortahork national school where a number of cultural events including, singing, music, poetry and short sketches took place.

They then went on to the former Coláiste Uladh. The proclamation was read by school children. 105 year old, Mrs. Biddy Greene, Ardsbeg, Gortahork was on hand to raise the national flag.

There was a very large crowd in attendance. Afterwards local historian and author, Noel Ó Gallchóir presented his highly acclaimed one-man-show, ‘Ó Pheann and Phiarsaigh’. The celebrations continued on Friday, Saturday and Sunday.

Pictured: The first class of Coláiste Uladh in 1906.

Local school children taking part in the celebrations in Gortahork