An evening of politics, cards and craic

"The State of the Nation", the new political satire by Conor Malone, manager of the Balor, premieres on Saturday. 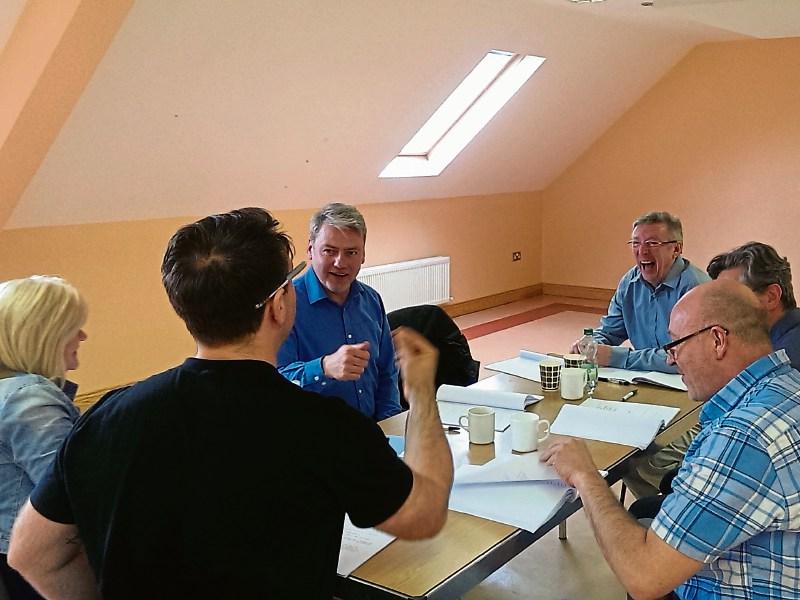 The Balor Arts Centre promises a thought-provoking evening on Saturday, with a rehearsed reading of an award-winning radio drama, the premiere of a new political satire and a discussion, “Ireland today vs the Proclamation: How do we measure up?”

There will be a poker game between Charles Haughey, Michael Collins, James Larkin and Thomas Davis. Who would you put your money on?

“The State of the Nation”/”The Fund”, starts at 7pm on Saturday, June 4th, at the Balor Arts Centre in Ballybofey.

“The State of the Nation”, the new political satire by Conor Malone, manager of the Balor, premieres on Saturday.

In a poker game like you’ve never seen, “The State of the Nation” features Conal Gallen as Charles Haughey, Cillian Ó Gairbhi as Michael Collins, Peter Byrne as James Larkin and James Lawne as Thomas Davis. The play brings together the towering 20th-century figures over a friendly game in the afterlife, peppered with provocative conversation.

Directed by Charlie Bonner and produced by Balor DCA, “The State of the Nation” is produced as part of Donegal County Council’s 1916 centenary commemorations.

Conor said he did not want to stage an historical piece. “Where’s all our plays about what’s happening now, today?” he said. “We’ve had so much going on in Ireland the last seven or eight years.”

He said he wanted to do something “different and fun, and something that would hopefully get people thinking”.

Audiences will be very familiar with Conal Gallen, the comedian who plays Haughey in the new play.

“It’s a departure from what he normally does,” said Conor. Conal was an actor in the old Butt Drama Circle before he went into stand-up.

“And he was a very good actor. And he’s a very, very good straight actor,” Conor said, adding that Conal is also an excellent mimic.

“So I think he’s going to surprise a lot of people,” Conor said.

He was also happy to have actor and director Charlie Bonner, originally from Ballybofey, directing. “It’s great for the Balor to be able to bring somebody like that back home,” Conor said.

The first performance on Saturday night’s bill begins at 7pm, when the Butt Drama Circle presents a rehearsed reading of “The Fund”, a radio drama Conor wrote that won third prize in the 2015 RTÉ Radio One PJ O’Connor awards.

“The Fund” tells the real-life story of International Monetary Fund whistleblower Davison Budhoo, whose 1988 resignation letter to the IMF ran more than 100 pages and detailed his disillusion with the organisation.

The evening will be capped off with a round-table discussion facilitated by journalist and broadcaster Frank Galligan, and including John Drennan, former political editor of The Irish Independent; Terrence McDonough, professor of economics at National University of Ireland Galway; and Brendan Ogle of the Unite trade union and the Right2Water campaign.

Conor said the evening will be an enjoyable one. He said the plays are designed to entertain and to get people thinking, and the round-table discussion will consider some of the questions raised.

“Are we the country we envisioned?” Conor asked.

Pictured: Director Charlie Bonner, centre, in an early rehearsal with Conal Gallen and the rest of the cast of The State of the Nation, a new play by Conor Malone.