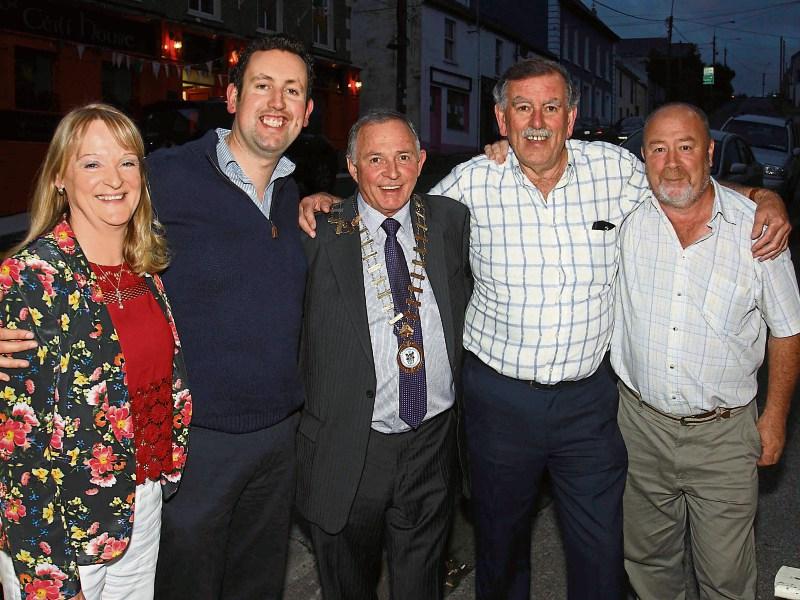 The new Donegal County Council Cathaoirleach, Fine Gael Cllr. Terence Slowey, has set out a wide-ranging set of priorities for his year in the chair.

The new cathaoirleach has identified supports for new and existing businesses, the environment, tourism and care for Donegal’s older citizens as his priority issues for the coming year.

And the Ardara man, a member of the Glenties Municipal District, also said that he and his municipal district colleagues will work closely together, “to make sure our voices are heard”.

Cllr. Slowey said he accepts the council-wide remit of the position and the importance of being scrupulously fair in chairing council meetings.

“But you are where you’re from and yes, there will be a focus on the west of the county and I make no apology for it,” he said.

He outlined his priorities in a conversation last week in his office in his home, the window opening to a view of the Bluestack Mountains stretching across the far side of Loughros Bay.

Cllr. Slowey wants to ensure the available services – the county council’s Local Enterprise Offices, Údarás na Gaeltachta, and the Education and Training Board and other training agencies, have supports in place for start-up business ventures.

The cathaoirleach wants to, “make sure there’s that integration across to kind of hold that industry by the hand for the first six months to a year”, he said.

In the same way, he wants to see supports for existing businesses. He pointed to the cooperation between the council, Letterkenny Institute of Technology and Randox in Dungloe, the clinical diagnostics company that plans to employ 540 people in its Rosses facility by 2020.

That cooperation has led to the recent memo of understanding between the council and LYIT that focuses on promoting sustainable economic development and job creation by working with stakeholders to address their education and training needs, developing regional capacity for research and innovation, and promoting and supporting entrepreneurship, investment and enterprise.

“That interaction is seamless, really, and that’s the way we want it,” the cathaoirleach said.

He said the county needs to keep as much education and training as possible in Donegal and the north west, saying people who leave the county to train do not always return.

On another front, he said tourism in Donegal has been very strong these last couple of years and is shaping up well again this year.

“What we need to do now is elongate the actual season on both sides,” he said.

Ardara is a good example of this. The village has a busy schedule of festivals throughout the year, from a Country and Western Festival in January to a matchmaking festival in November.

“There are a lot of things for people to do in west Donegal off peak,” Cllr. Slowey said, adding, “People will come for all types of reasons. We just need to promote that off-season a bit more.”

He said tourism provides good jobs across the county, but people are not always getting that year-round benefit at the moment, “so we need to stretch that out”.

With a professional background as an environmental chemist, Cllr. Slowey has long had an interest in the environment. As Ireland looks at a new pay-by-weight scheme for bin charges, he wants people to focus on recycling and reusing.

Recycling in the county is at about 40 per cent with a target of 50 per cent, he said. But while recycling has increased greatly in Donegal, “not everybody’s doing it,” he said.

He wants to see open days at the county’s civic amenity sites – there is one in each municipal district – to introduce people to the recycling facilities available there.

”Some people haven’t visited the civic amenity sites,” he said. “My experience of them is they’re absolutely first class.”

The cathaoirleach also said home compost bins are available for €13 at council public services centres. “Then you can use the material on your flower beds, and its perfect,” he said.

“People are not focused on recycling as much as they should be, and that’s only one aspect of the environment,” he said.

Cllr. Slowey applauded the work done at schools that are earning flags for their environmental focus, citing the Wood School in Ardara which, he said, “has gotten into it in a big way”.

Donegal is home to 13 Blue Flag beaches – tied with Kerry for the most in Ireland – and Cllr. Slowey said he would like the council to audit the county’s five Green Coast beaches to see which would be closest to achieving Blue Flag status.

Cllr. Slowey said he would like to see Donegal edge the Kingdom as home to the most blue flags in the country. However, he acknowledged that ”there’s a lot involved” in securing the prestigious Blue Flag status.

The cathaoirleach also wants to focus on the county’s elderly population. He recalled a Christmas function a few years ago attended by about 120 older people. A female member of An Garda Siochana went from table to table, to speak to people about simple things they could do to make their homes more secure.

“I think it worked very well,” he said, saying a programme like that could be rolled out at the network of daycare centres across the county.

The cathaoirleach’s wife, Patricia, daughter Jennifer and son Kelvin were in the council chamber last week when he was elected. Cllr. Slowey’s daughter Yvonne lives in Perth, Australia, with her Australian husband and their two young daughters.

For any local authority member to have the back-up of one’s spouse and family is very important, Cllr. Slowey said.

Cllr. Slowey was co-opted to the council in May of 2001, succeeding Charlie Bennett. Cllr. Bennett, then council cathaoirleach, had been leading a council delegation to the States and died suddenly during a St. Patrick’s Day parade in Brooklyn on March 18th of that year.

His widow, Marian, was in the council chamber last week when Cllr. Slowey was elected cathaoirleach.

“It was lovely that she was present,” Cllr. Slowey said.

Fine Gael took the cathaoirleach and leas-chathaoirleach seats in this year’s council as part of a power-sharing arrangement councillors agreed at the 2014 AGM.

”Power-sharing has held and it’s working very well from what I can see,” the new cathaoirleach said, adding, “It’s quite a diverse council and that diversity, I think, has helped”.

Cllr. Slowey returned to Donegal in 1996, after working as an environmental chemist in Dublin and living in Meath. He was involved in politics, but “always kind of a backroom person, never one to be out front,” he said. He organised campaigns for others, rather than running in them himself.

But he enjoys working with people as a councillor, saying, “That’s the most important thing for me.”

“That’s why it’s going to be nice over the next year to work with all the members and the people in different groups across Donegal, to support them,” he said.