FUNERAL OF 'BIG EDDIE' ON TUESDAY 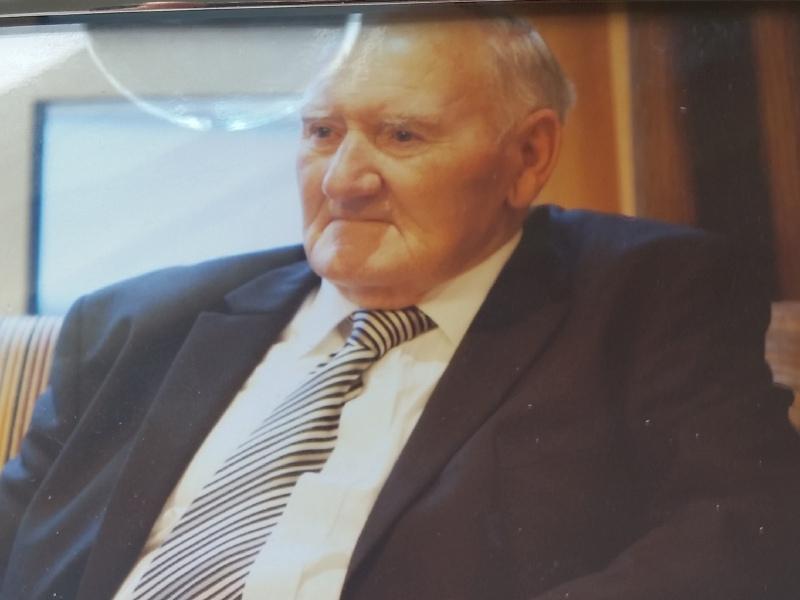 THE death has taken place peacefully at his home of Mr Eddie McGinley, Ballyheerin, Kilmacrennan.

Eddie (76) passed away at home on Saturday night (July 2) following an illness he bore with great dignity.

A native of Drumacaladdery (Drim), Cranford, ‘Big Eddie’ as he was affectionately known, was a highly respected member of the local community in Kilmacrennan.

He was also very well known and highly respected in local sporting and political circles for over six decades.

Born on April 10, 1940, the son of Eddie and Ann McGinley, he was raised in his beloved Cranford. He attended Coole National School before emigrating at a young age to work in Scotland.

It was there at Charles Street, Glasgow in an Irish dance hall, that he met his beloved wife Annie (nee Ferry) from Meendrain, Dungloe in April 1961.

The couple married in St Paul’s Church, Whiteinch in September 1963 and had five children, Eddie (jnr), Charlie, Ann Marie, Kevin and Martin who were all born in Glasgow.

Eddie, worked hard as a labourer in Glasgow for such well known building construction firms as Mc Alpine, Mitchell Construction, Press Construction and Wimpey as well as others with strong Irish connections including Greene Construction from Loughanure, Annagry.

Later he worked as a skilled machine operator and Eddie was well known to the ex- pat Irish community in Glasgow where he played gaelic football for Mulroy Gaels at Eastfield, Cambuslang with many of his friends from Donegal and further afield.

After a period of 21 years in Glasgow the family returned to Ireland in June, 1975. They set up home at Kilmacrennan Road, Milford before moving to Ballyheerin, Kilmacrennan where they have resided for the past 35 years.

Eddie, worked on the construction of the new wing of Letterkenny General Hospital and afterwards as a boiler man at St Conal’s.

He retired as a maintenance staff employee with the HSE at the Community Nursing Unit, Ramelton in 2005.

Unfortunately, Eddie’s retirement was curtailed due to ill health. However, his sharp wit and wry sense of humour always shone to the fore.

He was also legendary for his ‘no fuss, no nonsense’ type approach and he had a remarkable ability and knowledge to cut through many challenges and moments with one of his famous ‘one liners’ that could ease a tension or put a smile and laugh on somebody’s face.

He loved meeting people at the family home, mass at Kilmacrennan, or at his weekly trip to Tri-A-Lough in Fanad for many years until illness prevented him from doing so. It was on such occasions he would share his views on life and the state of the nation.

Eddie was part of the inner circle of Fanad where his close friend for the best part of six decades, Fr Michael Sweeney, steered Fanad Utd to a record ten Ulster Senior League titles and two Intermediate titles in 1988 and 1995.

It was a very proud day for Eddie and all the McGinley family, when his son Eddie (jnr) lifted the cup as captain of Fanad Utd when they became the first Donegal side to win the Intermediate Cup in May, 1988 at Dalymount Park, Dublin. It was a proud achievement for all the family.

Big Eddie, was also one of the founders of Cranford Utd F.C who enjoyed huge success in the Donegal League in the 70’s and 80s including four league titles in consecutive seasons.

He was a trustee of Cranford Park and one of his proudest days came in 1976, when the new soccer pitch was officially opened following a match between a Finn Harps select and Shamrock Rovers led by Johnny Giles and Eamon Dunphy. His son Eddie, also went on to manage Cranford in the 90’s winning promotions and league cups and titles.

Eddie, was also a proud member of the Executive Committee of the Donegal League and held many officer positions as well as being a proud manager of the Donegal Oscar Traynor team. For a brief period he also ‘took up the whistle’ as a referee.

A lifelong Glasgow Celtic supporter, Eddie, rarely missed a Celtic match at home or away whilst he worked in Glasgow. He travelled the length and breadth of Scotland with his friend and confidante Neil Doherty.

The two friends married two sisters and the families in Kilmacrennan and Creeslough have enjoyed a special bond ever since.

Eddie’s passing on Saturday night surrounded by his loving family and grandchildren came swiftly but very peacefully as he had been in the care of palliative care nurse Deirdre Trearty ably assisted by his loving daughter Ann Marie, a nurse in Meath and the medical team led by Dr Karina Hanley and Dr Miranda, Letterkenny University Hoispital.

The remains will repose at the family home, Ballyheerin, Kilmacrennan from 4pm today (Sunday) 3rd July.

The house will be private for the family from 10pm to 10am (Sunday July 3) and Monday (July 4) and on the morning of the funeral.

Donations in lieu of flowers to the Donegal Hospice and the Donegal branch of the Irish Heart Foundation.

After two nights wake, the funeral mass will be celebrated at St Columba’s Church, Kilmacrennan at 12 noon on Tuesday, (July 5).

Burial will take place immediately afterwards at the adjoining graveyard.

The respect in which ‘Big Eddie’ was held was reflected by the huge numbers of people who called to the family home during his illness, sent good will messages and mass cards and offered their support to the family, especially the close knit and highly supportive community in Kilmacrennan.

He doted on his loving grandchildren, Christopher, Donna, Nicola, Bryan, Patrick, Shaun, Aoife, Aisling and Kyle and was proud every day as they have grown up and made their own way in life.

Eddie’s passing will leave a huge void for his family and many friends to fill and also the communities of his beloved Kilmacrennan, Cranford and Fanad where he left an indelible mark on the lives of so many.

We will all miss him dearly but are so thankful to have known such a great man, husband, father, grandfather and confidante. ‘The Boss’ has gone but will never be forgotten in our hearts.