Diving and jiving with Sheephaven SAC 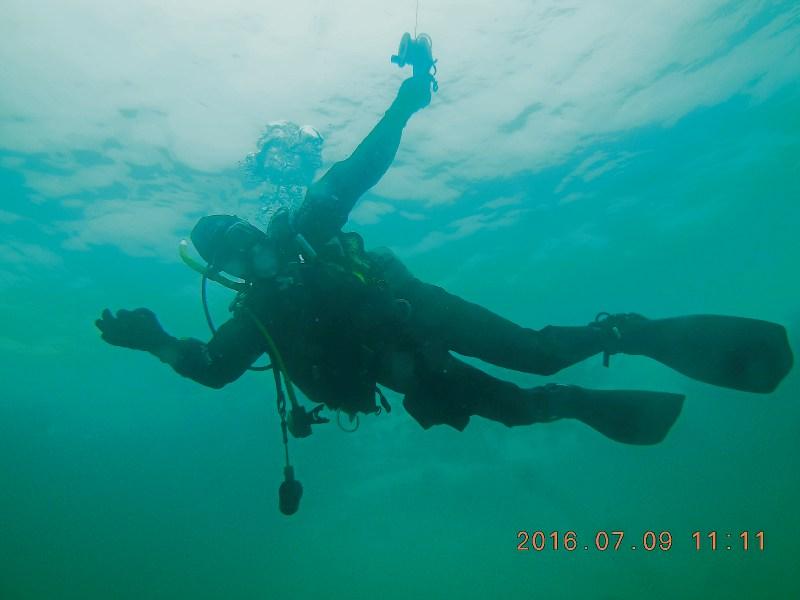 Near perfect in-water visibility made the dive and the late evening allowed for the observation of some species that would normally be nocturnal feeders, such as a pair of lobsters out in the open, which were a quite striking vibrant blue colour.

On Saturday morning Sheephaven SAC dived the Kalliopis, benefiting from the good sea conditions and probably the best in-water visibility of the year so far.

The dive party consisted of two boats and was conducted in two sticks, where the divers experienced at least 20 metres of horizontal visibility, which allowed them to see a lot more of the wreck than normal.

In addition to viewing the wrecks boilers, engine and winch gear, which is spread over different parts of the site in the vicinity of Tormore Rock, the divers found that the fish life was plentiful and in particular there were plenty of large pollock and ballan wrasse on site.

However the species of note for the dive was the rare observation of a five-beaded rocking, which not surprisingly, considering its name, has five barbels protruding from above and below its mouth.

It has the scientific name of ciliata mustela and has a smooth, scaleless body that is normally no greater than eight inches long; however this one was much bigger than that.

Generally they live in depths no deeper than 25 metres, which was the depth this specimen was observed, hiding amongst the wreck of the Kalliopis.

Dive times of 50 minutes were recorded during the dive to a maximum depth of 25 metres, while water temperature was a cosy 15 degrees Celsius.

To top it all off the divers came across a pod of up to eight dolphins when the dive party was on way back from the dive site. A truly top-class dive.

James Clay led Sheephaven divers on a two-boat dive to Horn Head on Sunday morning, where they had another morning of good diving conditions.

The dive was conducted in one stick thanks to Brendan Proctor, who provided dry coxswain duties, and the divers were able to get up to 40 minutes at a maximum depth of 25 metres.

In addition to good in-water visibility at up to 15 metres horizontally, the dive once again benefited from water temperatures of 15 degrees Celsius, which is nearly as warm as it gets around here.

Also, once again marine life on site was plentiful, with shoals of fish from the smallest larvae right up to some nice sized pollock observed on site, as well a lovely big conger eel and a number of sightings of butterfish. Undoubtedly a great way to finish off a good week’s diving.

Finally Caroline McGee is putting together a jive trip (not dive trip) to Burtonport on Wednesday week next. Unfortunately this will have to be on land as the divers felt that hearing “Wagon Wheel” underwater might be just a bit difficult.

Nonetheless, with some suitable training Caroline expects Sheephaven divers to participate in a world record attempt at the Burtonport Summer Festival for the greatest number of jivers at one time on Wednesday, 20th July, at 10.30pm.

Registration starts at 8.30pm and all proceeds will go the local RNLI lifeboat station in Arranmore.

Caroline has started training some of her diving colleagues in the basics of what is involved and in doing so the talent that is Brendan Proctor, who clearly needs no training, was evident to all present.

For a few minutes in the clubhouse on Sunday afternoon there was never as much laughter and fun heard in the building since it opened over 10 years ago.

So if anyone wants to be part of a world record attempt, have a great time and generate funds for a good cause, just give Caroline a ring for the details of what is involved.