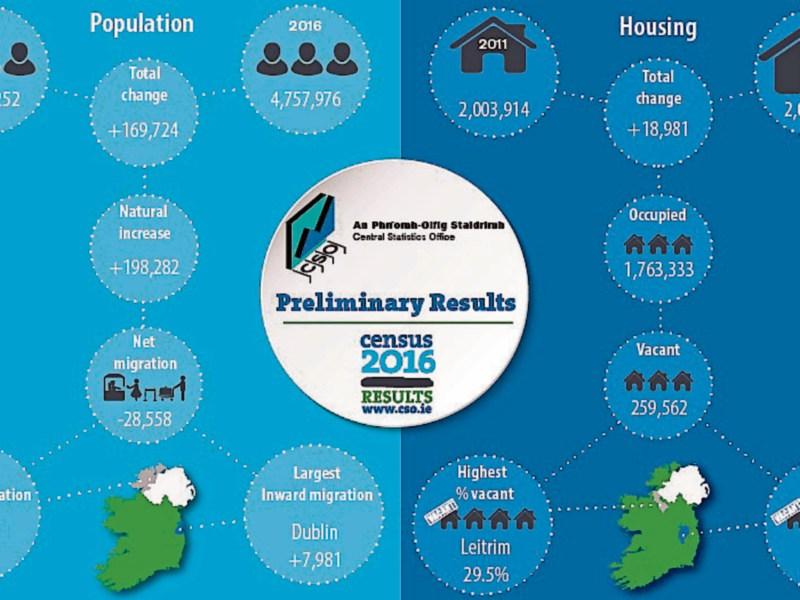 Donegal was one of three counties to show a drop in population in five years, according to preliminary 2016 Census results released today.

Donegal recorded a fall of 2,382, or 1.5 per cent, in its population since 2011, according to figures released by the Central Statistics Office (CSO). The population of Donegal was recorded at 158,755 on Census Night.

Overall, the preliminary results show that Ireland’s population continues to grow, though more slowly than it did between the 2006 and 2011 censuses.

Still, population growth varied widely among the counties, with County Meath showing the highest percentage increase, at 5.9 per cent.

The two other counties to record a population decline over the five years, according to the preliminary results, were Mayo, at -0.2 per cent; and Sligo, at -0.1 per cent.

Total population of Ireland increases by 3.7%

Donegal also recorded a significantly higher percentage of vacant dwellings than the national average. Nationally, the preliminary census figures showed a 13 per cent decrease - nearly 30,000 fewer premises - in the number of vacant dwellings since 2011, for an overall vacancy rate of 12.8 per cent.

However, the preliminary results for Donegal show a total of 23,899 vacant dwellings for a vacancy rate of 28.2 per cent.

The CSO reported that the total change in population between censuses is the combined effect of natural increase and net migration. According to the CSO, the natural population increase is estimated at 198,282, with an estimated net migration of -28,558 for the state.

Net migration for Donegal was estimated at -6,731 persons, the CSO reported.

The office reported that net migration on a county-by-county basis varied widely across the state, with most counties experiencing a net outward migration. A small number, such as Dublin and Cork, saw net inwards movement, the CSO reported.