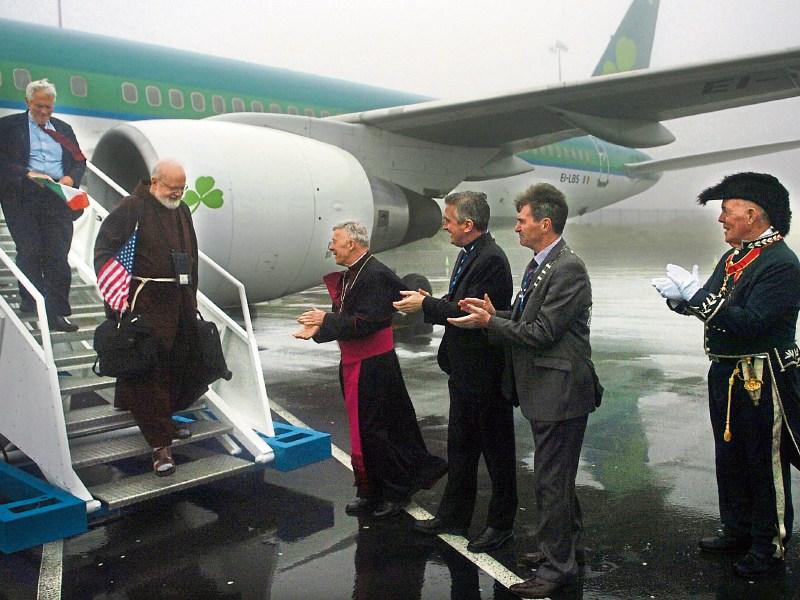 Knock Shrine and Ireland West Airport was delighted last Friday to welcome the arrival of the first Diocesan pilgrimage from the Archdiocese of Boston with Aer Lingus.

The Aer Lingus 757 airplane, carrying more than 170 passengers from a host of cities across the US, arrived into Ireland West Airport Knock just after 9:00am and was greeted by a large crowd gathered at the airport to witness this historic occasion.

The special pilgrimage flight, which is supported by the Archdiocese of Boston and led by the Archbishop of Boston, Cardinal Seán Patrick O'Malley, will embark on a six day, specially tailored Pilgrimage programme, showcasing some of Ireland’s most historic spiritual sites. The highlight of the visit to the West of Ireland will be the Re-dedication of Knock Shrine, which will take place on Saturday 16th July. Two pilgrimage groups will spend time travelling around the region spending four nights in total in the Donegal region.

Archbishop of Boston, Cardinal O'Malley, speaking on landing in the West of Ireland said ‘It’s an honour for me to arrive into the beautiful West of Ireland on this historic flight. I am hugely excited to see what this beautiful part of Ireland has to offer and am particularly looking forward to visiting the Basilica of Our Lady, Queen of Ireland, in Knock and being part of the Re-dedication of Knock Shrine.

Fr. Richard Gibbons, P.P., and Rector of Knock Shrine added ‘We are delighted to welcome Cardinal Seán O’Malley and the Archdiocese of Boston to celebrate the 40 year Rededication of Knock Basilica on July 16th. This is the second organised pilgrimage coming in from the US, following from the visit of Cardinal Dolan last year which was truly wonderful for Knock and the whole region. The coinciding 40-year celebration of Knock Basilica is perfectly providential in echoing the dream of Monsignor James Horan to bring pilgrims to Knock from all over the world. This flight suggests greater things for Knock, the Airport and the wider community. We are anticipating crowds similar to the 15th August,which is traditionally a very busy day in Knock, and of course we welcome all to attend’.

Welcoming Friday's flight, Joe Kennedy, Chairman, Ireland West Airport Knock, said ‘I am honoured to welcome our visitors from the US on this historic occasion of the first ever Transatlantic service with Aer Lingus from Boston. It’s great to see people from all over the Boston region disembarking at Ireland West this morning. It further reinforces our strong belief that direct scheduled services from the likes of New York and Boston into Ireland West would be successful’.