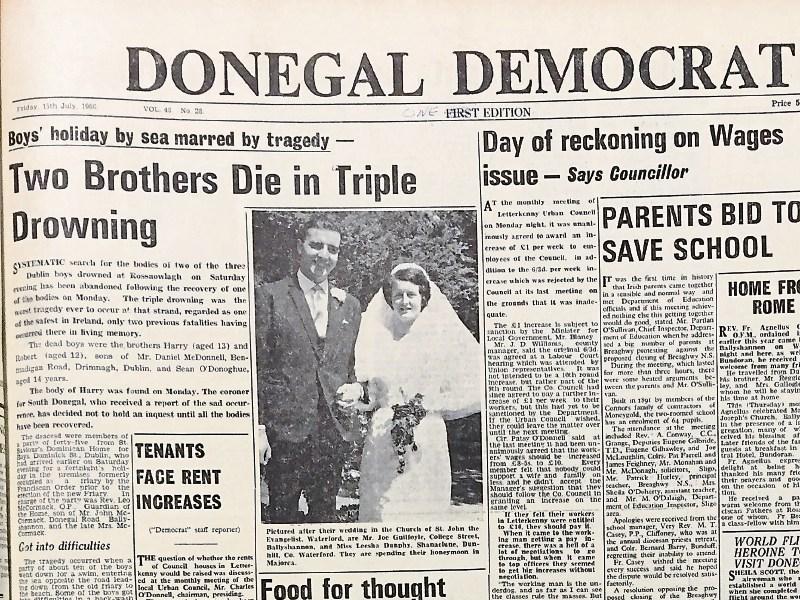 The worst drownings ever to occur on Rossnowlagh beach was commemorated on Saturday last when the family of the victims visited the scene and placed flowers in a poignant vigil at the scene.

A total of three lives were lost on that fateful Saturday fifty years ago - Harry McDonnell (13), his brother Robert (12) and Sean Donoghue (13) drowned on the evening they arrived in Rossnowlagh while on holiday with a group of 45 boys from St Xavier's Orphanage in Dublin.

The Donegal Democrat reported at the time that “despite a systematic search for the bodies on the Saturday the search had to be abandoned with the bodies of the victims not being recovered until later in the week.

“The tragedy occurred when about ten of the boys went down for a swim from the old friary. Eyewitness reports indicated that some of the boys got caught in the backwash but that their cries for help were mistaken for playful banter.

“From the recollections of some of the older boys at the time it would seem that Harry McDonnell lost his life in a vain attempt to save his younger brother Robert. It appeared that Harry had made his way to safety but went back out again when he noticed his brother in difficulty. Neither of the two were out of their depth but tragically both disappeared within minutes.

“As word spread volunteers came from nearby Ballyshannon and Donegal Town as well as local holidaymakers. This was so intense that cars were driven on to the beach and their headlights used to pour light on the scene throughout the night,” the Democrat reported on its front page in July 1966.

On Saturday last as thousands of Orangemen celebrated the Twelfth of July, members of the McDonnell family visited the scene of the tragedy a half a century later. Joseph, John and their sister Geraldine travelled to the scene for the very first time.

The family said that for years they were never given the information as to what had actually happened on that tragic day.

Carmel McDonnell said over 16 years ago in an appeal for information, “I was 11 at the time it happened and I was in Goldenbridge orphanage with my two sisters and two brothers. We were never allowed to grieve,'' she said. ``My sister and I were given two bulls-eye sweets and told to go away and say our prayers.''

The eight McDonnell children, of Drimnagh, were taken into the orphanages after their mother abandoned them on July 9, 1965, exactly a year before her brothers drowned.

At the weekend the brothers spoke of the emotional trauma they experience at the time even though they were very young.

John recalled, “ “I remember being told that my brothers had drowned and just couldn’t stop crying. The nun told me to stop, reminding me that I had lots of other brothers and sisters. “

Joseph added that he still had nightmares and often thought “if I could have done something to prevent the tragedy. I was only five at the time but I could swim”. Both brothers were full of praise for those who helped out on that weekend 50 years ago and for those who assisted in the vigil last weekend.

John added, “We hope now to get council permission to place a plaque near the scene of the tragedy in memory of the victims. Retired Garda Sergeant Aidan Murray, who led the search for the bodies at the time, accompanied the family to the scene last weekend. He said. “Everyone for miles around pitched in to help with the search for the bodies- it had an enormous impact on the Gardai and the local people.

“I was on my own when I took one of the bodies to the hospital after it was found days later. It was one of the toughest duties I ever performed.”