A 'massive' gift to Ballaghderg 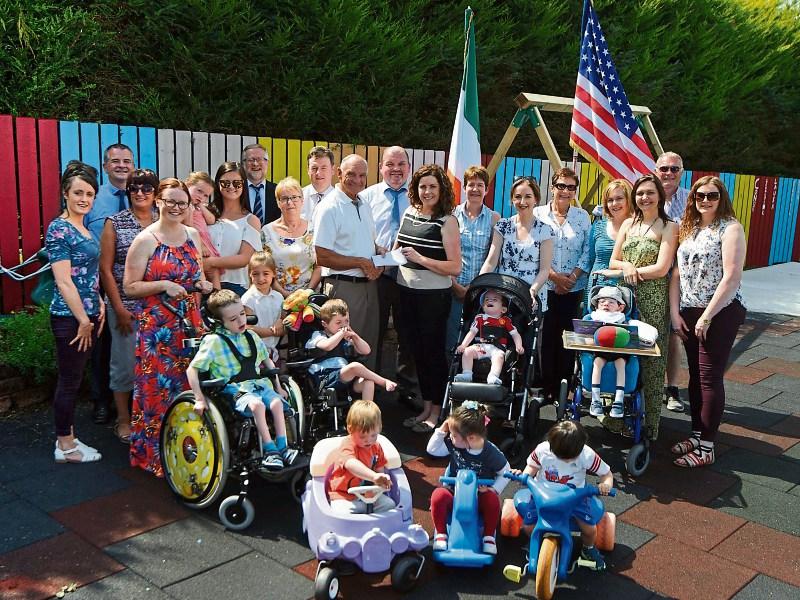 The Ballaghderg special needs pre-school in Letterkenny has received donations of $10,000 and €5,000 that will go toward the cost of a multi-sensory room at the school, a project a school parent said will be a “massive” benefit for pupils.

Ray Flynn, former mayor of the US city of Boston, and former US ambassador to the Holy See; and Billy Higgins of Southill Children’s Fund in Boston made a donation of $10,000 to the school recently. This was matched by a €5,000 donation from Fianna Fáil Cllr. Ciaran Brogan from his council members development fund.

The Health Service Executive pre-school at Ballaghderg provides services for pre-school aged children with moderate to severe intellectual disabilities and complex care needs. Each child learns to develop and grow through play with programmes tailored to their level of ability.

Mrs. Nibbs said it was important for the visitors, and for council and the HSE, to see the valuable work at Ballaghderg, “and what a vital support it is.

“You can be told what this school does, but until you come up here and see what the school does and speak to parents – you can’t see that on paper,” she said.

Mrs. Nibbs praised the staff at the pre-school, saying “It’s far more than a job to them – they just love the kids so much.”

The donations will go towards the cost of a multi-sensory room at Ballaghderg, tailored to suit children’s needs. Mrs. Nibbs said the benefits of multi-sensory rooms for children who have intellectual disabilities or complex medical needs has been well-documented.

“It has a very calming effect on them,” she said. Currently, Ballaghderg transports pupils to Derry to allow them to experience the benefits of a multi-sensory room. Having the facility at Ballaghderg will be “massive”, Mrs. Nibbs said.

“This would have been on their wish list for years,” she said.

Eugene McElroy, HSE business manager for Donegal intellectual disability services, thanked Mr. Higgins, Mr. Flynn and Cllr. Brogan on behalf of the HSE, and the staff and parents of the pre-school.

He said the multi-sensory room “will enhance the lives of the children who use it”.