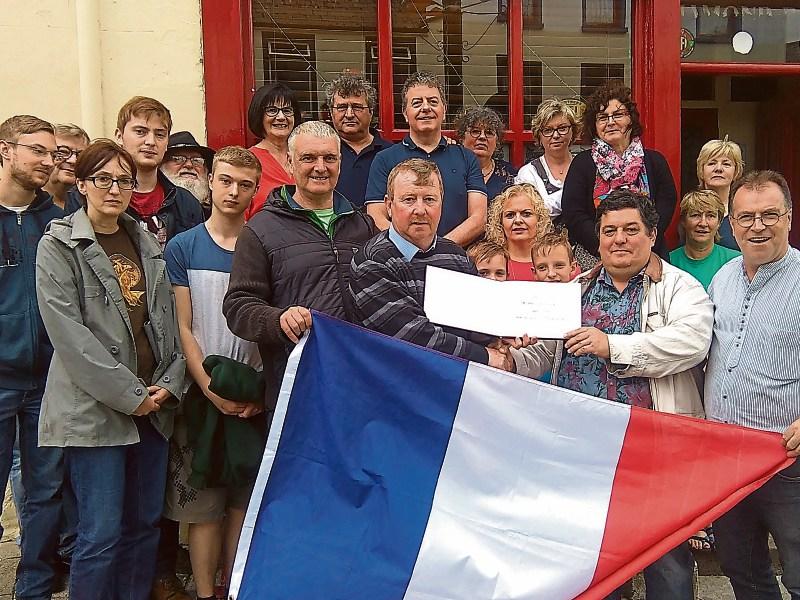 A very strong bond between Ballyshannon and France was underlined this week when a book of condolence to the French from the people of Ballyshannon was presented to the Mayor of Grenay, writes Michael Daly.

With relations between Ireland and France particularly strong following the reception received there by Irish fans at the European football championship, this latest gesture has been well received in France.

With a front page citation which read: “In memory of the tragic loss of lives in France 2016 from the people of Ballyshannon,” the book, with more than 700 signatures, was presented to Christian Champire, Mayor of Grenay, Pas de Calais on Monday last.

The book was presented to him by local publican, Billy Grimes, who said he wanted to reach out in some way to the people of France and offer them the sympathy of the people of Ballyshannon.

He explained this was done against the backdrop of the town twinning between Grenay and Ballyshannon in 2010 and alluded to the strong connections between Ballyshannon Folk Festival and the Grenay equivalent which is known as the Slainte Festival Pas de Calais which were also twinned in 2009.

“Because of our links through both towns and both festivals, there is a fantastic affinity between us and the people of France and Grenay in particular. During your recent very difficult times in France and more particularly the tragedy in Niece, I decided as part of your visit to put together, on behalf of the people of Ballyshannon, a book of our sympathies and condolences and I am glad to say the people of Ballyshannon and surrounding areas responded very generously with their signing of the book,” Mr Grimes told a gathering of French visitors and locals from Ballyshannon.

Christian Champire, Mayor of Grenay, accepting the book, said what had been done reflected the great friendship that exists between both towns: “It is with great emotion I accept this book and this magnificent gesture of solidarity that has been shown to us by the people of Ballyshannon. It is a measure of the depth of friendship there is between us.”

The Mayor, who attended the 39th annual Folk Festival along with 19 townspeople from Grenay and nearby Billy Montigny (whose Mayor Bruno Troui also visited Ballyshannon) said the book would be displayed locally and a copy would be forwarded to the official representative of the French government in the north of France.

*Our photo shows Mayor of Grenay Christian Champire accepting the book of condolence from Billy Grimes as they were joined by members of the French group of visitors and locals from Ballyshannon, many of whom were volunteering at the Folk Festival last weekend.