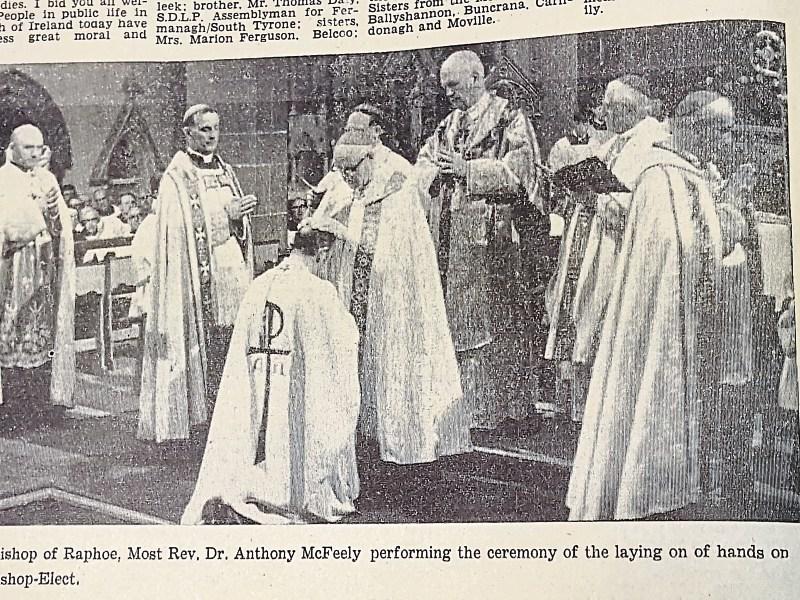 Bishop Edward Daly was born in Belleek on December 5, 1933.

Thousands will attend his funeral this afternoon in Derry and among those attending will be many from Belleek and environs.

He attended what was then known as The Commons National School in Belleek where he formed a close friendship with Joe O’Loughlin, who is now a noted historian. Joe recalls how they made their first communion together and were confirmed together, by the Bishop of Derry Dr Neil Farren, whom he later succeeded. They even served together as altar boys played football together and, Joe laughs, “got up to all the usual roguery that boys do”.

Joe also recounts how, at the age of 10, in August 1944, the then Eddie Daly saw a plane go down between Cashelard and Corlea. He cycled to the blazing Sunderland flying boat that had been stationed at Castle Archdale and helped rescue Canadian airman Chuck Singer. Three other airmen perished in the crash.

Joe remembers the young Edward Daly having “a great love of people and a fantastic memory for names. If he met you once, he would know you ten years later.

“He also stayed true to his roots, he was always very much a man of the people.”

After primary school, Edward Daly studied at St Columb’s College in Derry where he excelled. The diocese of Derry then sent him to study at the Irish College in Rome.

Our picture from our 1974 files, shows The Bishop of Raphoe, Most Rev. Dr. Anthony McFeely performing the ceremony of the laying on of hands on the then Bishop Elect.