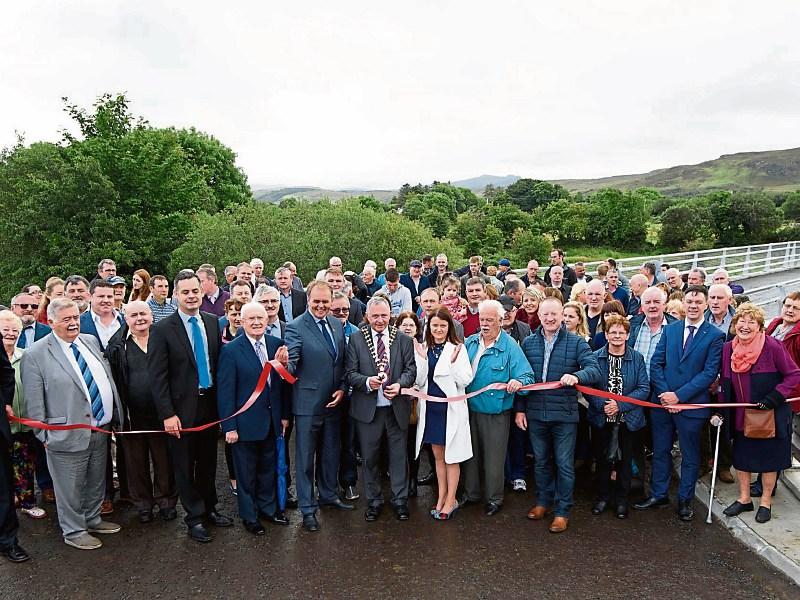 There was a huge community turnout at today’s official opening of Mullantiboyle Bridge in Glenties.

The official opening, by Cathaoirleach of Donegal County Council, Cllr. Terence Slowey was a special day for the people of Glenties.

The new bridge is a 24 metre single span structure which is 6m wide incorporating a 5m wide road and crosses the Owenea River providing an alternative access route around Glenties Town.

Cllr. Slowey, no stranger to Glenties, having attended secondary school there, gave a brief summary of the project and of the many challenges and obstacles that were overcome by the community working in close collaboration with both the elected members and Council officials.

“Following a collapse of one of the two spans of the old bridge in 2010, it was concluded that the structure was beyond repair and various interim solutions were considered by the Council in consultation with the Local Mullantiboyle Bridge Group including a pedestrian bridge. However, the local group were determined to wait for a Roadbridge and when we look at the new bridge here today, it is clear to me that this was the correct decision.

“There were many design complexities including varying ground conditions and freshwater pearl mussels and these were carefully considered and a design decision was taken to ensure the best possible outcome,” he said.

Cllr Slowey thanked everyone involved in the construction of the new bridge including the Council engineers, design consultants Roughan & O’Donovan, the Office of Public Works, the National Parks & Wildlife Service, Inland Fisheries Ireland and Ward & Burke Construction Ltd, the appointed contractors. He thanked Brendan McFadden, Area Roads Manager for Glenties Municipal District. “From the time when the bridge first collapsed right through to the completion of the works in recent days, Brendan has continued to spearhead the project from the Council’s perspective and I would like to thank him for his ongoing commitment and dedication to get this project completed,” he added.

He thanked the former Minister for Transport, Paschal Donohoe, for providing the funding for the is project via the Department of Transport, Tourism and Sport (DTTAS)”.

Cllr. Marie Therese Gallagher, speaking on behalf of the elected members of Glenties Municipal District, paid tribute to the people of Glenties for their commitment in seeing this project through.

“It is great to see the people of Glenties here today, because without you this bridge would never have been replaced. It was a bridge that fell down on a back road but you kept the pressure on and even though there were many obstacles in your way your determination win through.

“This project was led by the people of Glenties and we don’t often see this type of turn out at official openings. It is clear that this is about a community coming together to acknowledge that Mullantiboyle bridge is a vital piece of infrastructure that connects the people of this town.”

Joe McHugh, T.D. Minister of State for the Diaspora acknowledged the great work done by everyone: “This type of infrastructure is vital to communities and I would like to acknowledge the great work done by everyone involved, from the local community representatives, to the elected members, to the Council Officials, the design consultants and indeed the contractors. This bridge will be here for many generations to come and will continue to be an important part of the fabric of the community allowing access for local residents and farmers as well as visitors to the area.”

Pictured: Mullantiboyle Bridge at Glenties was officially opened on Monday by the Cathaoirleach of Donegal County Council Cllr. Terence Slowey. Included in this photo are local councillors, members of the Oireachtas, county council officials and staff and a great cross section of the local community who attended the opening. Photo Clive Wasson