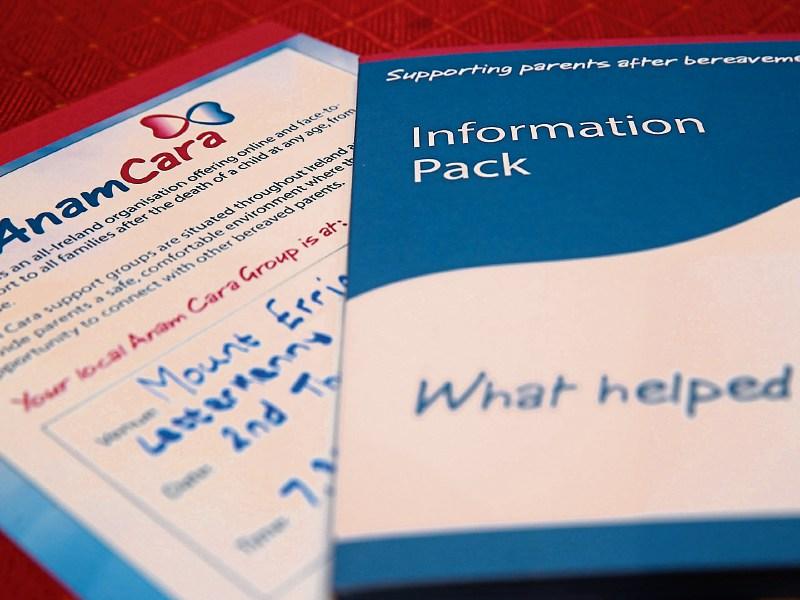 Anam Cara has launched a new resource aimed at supporting bereaved parents in the early days after the death of their son or daughter.

More than 50 local organisations were at the launch in the Mount Errigal Hotel, Letterkenny and received copies of the new pack, which contains seven booklets on different themes related to parental grief, such as A Dad’s Grief, A Mother’s Grief, Coping with the Sudden Death of My Child and Supporting My Family.

The local groups represented included the Defence Forces, An Garda Síochana, the HSE, Letterkenny General Hospital and St Conal’s, Letterkenny Hospice, Rainbows, Jigsaw and ParentStop. Local priests and social workers were there too. A number of organisations from Strabane and Derry also attended, including Barnardos, the Family Voices Forum and the Western Trust.

One of the Anam Cara Donegal volunteers, Ciara Murphy, spoke at the launch about how she had been supported by Anam Cara: “Losing my son has been the most devastating thing that has happened in my life. Anam Cara has been there to help me pick up the pieces and learn to live again."

Founded in 2008, Anam Cara Donegal meets on the second Thursday of every month in the Mount Errigal in Letterkenny, affording bereaved parents from Donegal, Derry and north Tyrone a safe and comfortable setting where they can meet other bereaved parents. Anam Cara is open to all bereaved parents, regardless of the age or circumstances of their child’s death, or whether the death was recent or not.

Launching the resource pack, Anam Cara CEO Sharon Vard said: “It is so important to ensure that any parent who is suffering the terrible and unimaginable ordeal of losing a child knows that Anam Cara is here to help. Our packs are a powerful resource for any family experiencing the death of a child, irrespective of whether the child was a baby or a grown adult. Newly bereaved parents need others to put this information into their hands at the earliest stage of their bereavement journey. They are very fragile in the first few months and may not have the energy to pick up the phone or actively look for help.

“Newly bereaved parents and families need the support of those who have suffered a similar experience and learned to cope again, they need reassurance that there is light at the end of the tunnel, that they too will be able to emerge from the depths of despair and start living and enjoying life again.”

Also on hand to help launch the pack was Dr Gerry Lane, Consultant in Emergency Medicine at Letterkenny General Hospital.

At the start of the launch Anam Cara thanked a group of amazing local fundraisers who in July managed to raise €16,500 for Anam Cara in memory of little Anna Baird who died suddenly in 2013.

The the new pack, which contains seven booklets on different themes related to parental grief.

At the launch of the Anam Cara Information Pack in the Mount Errigal hotel, Letterkenny on Wednesday were, from left, Maeve McHarty, Anam Cara Parent Facilitator, Dr. Gerry Lane, consultant in emergency medicine, Letterkenny University Hospital, Stella McCole, counsellor and professional co-facilitator Anam Cara who launched the pack and Ciara Murphy who spoke about her personal experience with bereavement.