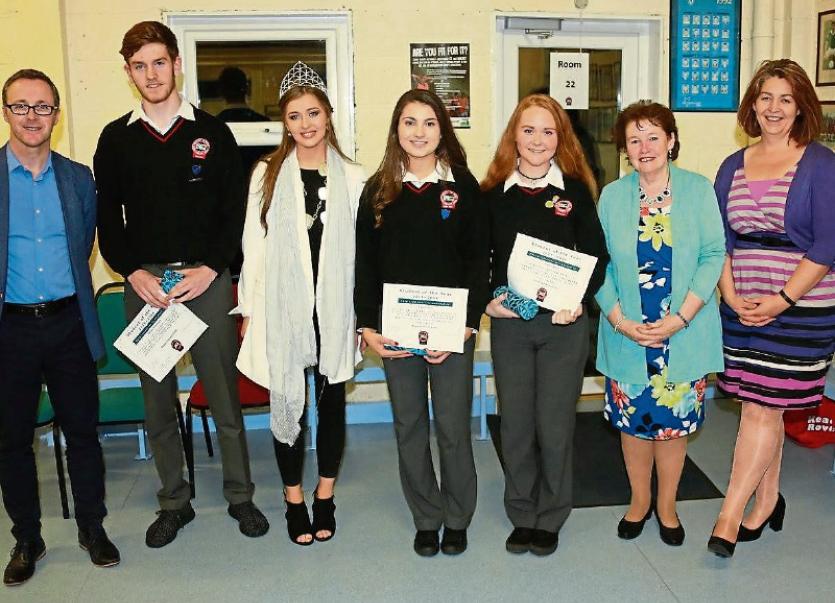 The annual Transition Year Awards night took place recently in the Rosses Community School for the class of 2015-2016.

The students were awarded certificates in a broad range of subjects, including tourism (Board Fáilte); young social innovators; European studies; drama, for the production of Cinderella, the pantomime; and studies in history, looking at 1916.

The students were also highly praised for their fundraising for the Irish Heart Foundation and well as for raising €1,000 for Brother Kevin Crowley and the Capuchin Day Centre for homeless people that he runs in Dublin.

The students had also been given the opportunity to visit the centre and to see the great work that is being done there.

Many of the students were also involved in the Strictly Come Dancing event, which raised funds for the school, and they travelled to Barcelona on a school trip which was thoroughly enjoyed by all.

Four of the Rosses Community School transition-year students represented the school on the Diocesan Pilgrimage to Lourdes and were highly praised by all the local pilgrims who travelled with them for their help and dedication.

Some Rosses Community school students also travelled to Medjugore on the annual pilgrimage organised in the school by the school chaplain, Father Nigel Gallagher.

The guest of honour, who presented the certificates to the students, was the current Mary From Dungloe, Eva Ní Dhoibhlinn, who is from Gaoth Dobhair.

Eva had completed a Transition Year herself and she told the students how the experience enabled her to discover new skills and to try different subjects which she had never tackled before.

Eva went on to say that the work experience she did during her Transition Year helped her to consider a career in primary teaching and she is now happily following her dream and training as a teacher.

Eva spoke very eloquently and said that Transition Year had helped to build up her confidence and prepared her for public speaking, which is still a huge hurdle for most people.

John Gorman, Rosses Community School principal, paid tribute to Eva and wished her well and went on to congratulate all the teachers, parents and students who put so much effort into Transition Year.

Bernadette Brennan, TY co-ordinator, thanked the students for getting involved in all the various projects during the year and again stated that the students who put the real effort into the year receive boundless rewards.

There were three Student of the Year Awards presented on the night to Breena Boyle, Amy Hanna and Declan McDonagh.

Congratulations to all students for a year well served.