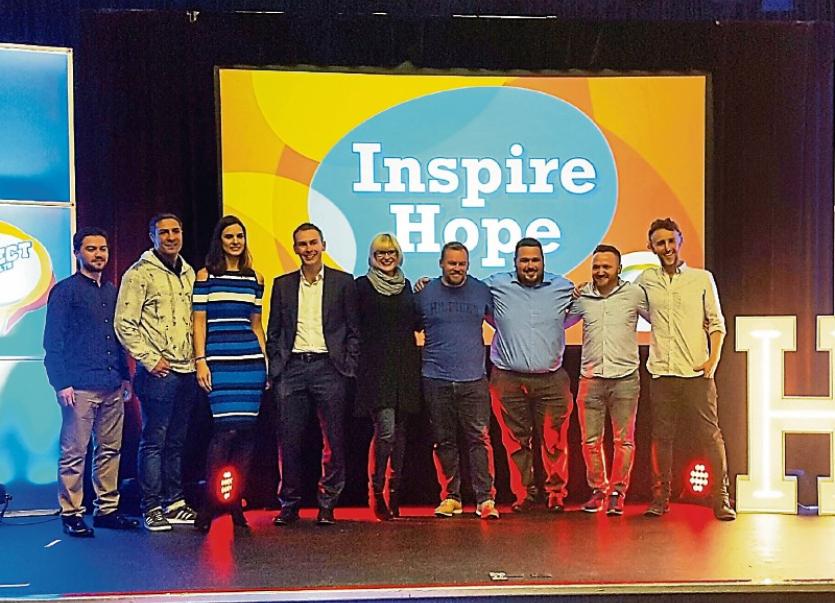 An Irish boxer who won a silver medal at the Olympics told a conference in Donegal, “I’ve been sober six years and, for me, that beats any Olympic medal.”

Kenny Egan was speaking at the InspireHope conference in Ballyshannon on Saturday.

The date is especially poignant for Breifne Earley, who also spoke on Saturday. It’s the anniversary of the death of his young cousin, who suffered from leukaemia.

When, six years ago, Breifne had made the decision to take his own life, it was a text from his father, reminding him to attend a memorial service for his cousin, that brought him back from the brink.

”I realised I was making the decision to push my pain and my hurt on to my family and I knew I couldn’t continue to go down that road.

“The common denominator in all that was bothering me - my weight, my relationships, my work - was me and I knew I had to change me,” he told the crowd at the Abbey Arts Centre.

So, “after 15 years of inactivity and having been born with the body of a god... Buddha”, Breifne went on to lose five stone, complete marathons and triathlons, and ultimately win the World Cycle Race.

He pedalled around the world in 18 months to raise awareness of depression and suicide prevention and has written a book, Pedal the Planet, telling his story. Half the proceeds of the book go directly to support the work of Pieta House, the charity supporting people at risk of suicide.

Breifne did it by relying on his mantra, “just keep going” and cited an amazing example of this. During the World Cycle Race, he was climbing the Western Gap mountains in India. He had run out of food and water in 51 degrees heat and was “one percent away from quitting”.

A car pulled in and the driver offered him a lift. Breifne was tempted but knew that, if he accepted a lift, he’d be disqualified, so he refused.

The man gave him food and water, enough to get Breifne back on the road. “I powered up the hill and, 200 yards on, around the first corner, was a shop. Sometimes you don’t realise how close you are to the finish line: if you keep going, you will get there.”

Other speakers included: author Tara West, who described depression as “mood flu” because it affects people differently and often re-occurs; clinical psychologist Dr Keith Gaynor with simple tips to tackle depression anxiety; model Alison Canavan on the importance of self-care; and Donal Scanlon on Mental Health First Aid Ireland, which will run a course in Ballyshannon within the next month or so.

“Change starts with us”

Ruairí McKiernan, who along with Keith Corcoran of Laghey and Anna Lally of Rossnowlagh, co-founded SpunOut.ie, the mental health resource for young people, twelve years ago, was back in the town where it all began.

He encouraged everyone to believe in themselves. “We tend to leave it to other people to lead change, he said, “But change all starts with us.

“People like Donald Trump trade in fear and despair. But now, more than ever, we need to really step up our game and not be afraid to talk about the opposite of fear which I believe is love.

"Great things are possible and it's all about recognising that greatness inside you and ignoring the little voice that tries to pull you down."

“The perils of fame”

The final speaker was Kenny Egan, who also spoke directly from the heart. When the boxer who inspired the country by winning a silver medal at the 2012 Olympics in Beijing spoke, you could have heard a pin drop.

“Representing Ireland at the Olympics and winning a medal was my carrot for 18 years. When I was eight, I saw Michael Carruth's homecoming and I put on my first pair of gloves.

“When the bell rang after the 4th round in the final in Beijing, I knew I was losing. Instead of thinking ‘Great, I’ve won a silver medal at the Olympics’, I dropped to my knees and I said to myself, ‘What the f*** do I do now?’”

“I was 26 years of age, I’d never been told to get an education or plan for life after the Olympics.”

At this stage of his talk, Kenny pointed to a slide of Mount Everest. “Did you know that 90% of the deaths on Everest are on the descent?”, he asked the audience.

When he came back to Ireland, he “couldn’t handle it” and turned to alcohol.

“Two years to the day, I was in a very dark place and I ended up at my first AA meeting. My last drink was in Naas. My mother walked in the door and said, 'Kenneth, come on, just go home.' I didn't say anything. I just got in the car. It's the only battle that I lost but I came out the winner.

“I've been in the ring 200 times but this is the real battle and it goes on everyday. I’m sober six years now and that, for me, beats any Olympic medal.”