Bonagee to see the light on Friday night

NEW FLOODLIGHTS TO HAVE OFFICIAL SWITCH-ON 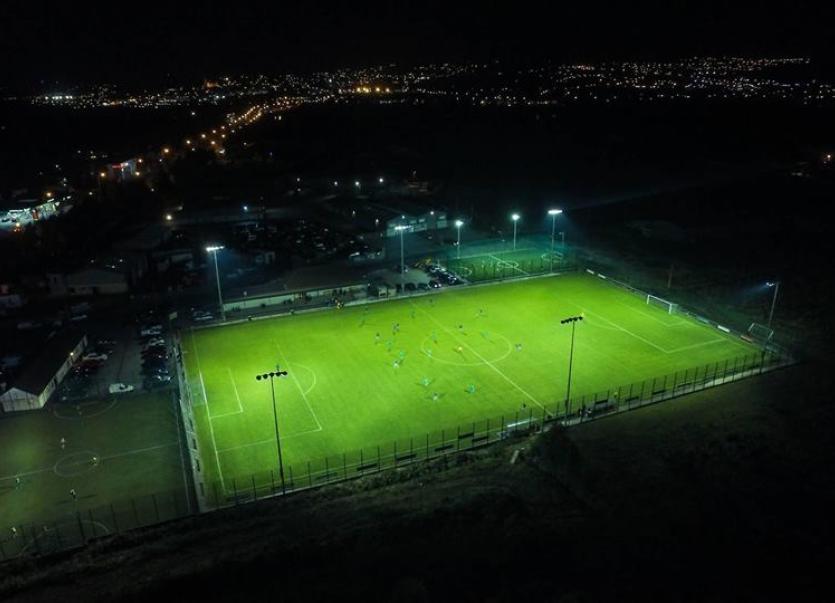 Bonagee United will mark the latest phase of their impressive development at Dry Arch Park on Friday evening when the new floodlights at the venue are officially switched on.
The lights, at a cost of around €112,000, will be switched on by Katie McFadden, widow of the late Paddy McFadden, one of the club’s founder members, at 7pm before a friendly between Bonagee United and a Finn Harps Select gets underway at 8pm.
Six stanchions, each standing at 18-metres tall, holding five lights each with 500 lux – over League of Ireland standard – have been installed and now illuminate the sky around the Dry Arch.
It will certainly be a proud night for the club, and particularly for the likes of Eric Funston and Laurence Gildea, two founder members who remain heavily involved, and for other long-term members like Derek Hunter.
“We have asked Katie McFadden to perform the switch on to sort of mark Paddy’s association with the club – he was synonymous with the club from our days when we were called Arcade Athletic,” says club secretary John Lafferty.
This latest part of the development at Dry Arch Park has been completed at a cost of around €150,000.
In addition to the new floodlights, the club resurfaced one of astroturf pitches and also developed a new wheelchair viewing area and a presentation/press area in the stand.
From the 2015 Sports Capital Programme, Bonagee United received funding of €90,000 while they obtained €7,500 from the Development Funding of Councillors in the Letterkenny Municipal District.
Lafferty says: “One thing people always say about Bonagee United is that we have a good, working committee and it’s great to hear people coming up and complimenting our facilities.
“We amalgamated the junior and senior sides of the clubs about six years ago and that was one of the best decisions we ever made. We really pushed on as a club after that.
“The last three or four years, really since Donal Coyle came in as the Club Chairman, have been excellent. Donal is so proactive and really spearheaded the development.”
Back in 1998, the club started a massive re-development which went on to incorporate a general purpose hall, two astroturf pitches, a spectator stand, new playing pitch, additional dressing rooms and ancillary facilities.
In total, the development works at Dry Arch Park amounts to around €1.25million.
After the official switch-on takes place, Bonagee United – after a week that saw Peter Moran’s senior team go joint-top of the Ulster Senior League – will play Finn Harps in a friendly.
Lafferty says: “I think it is only right at fitting that we asked Finn Harps to play on the occasion and I want to thank John Campbell and Ollie Horgan, who have been very supportive of us. Bonagee, as a club, are always good supporters of Finn Harps and we’re delighted that they’re coming to play us on our big night.”