TOO STRONG FOR NAOMH CONAILL IN LEAGUE DECIDER 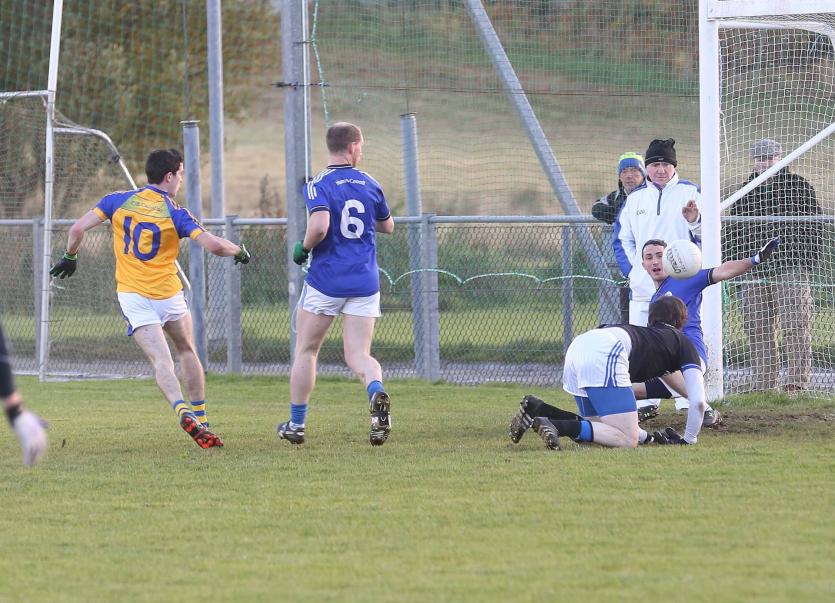 Kilcar are Donegal League champions following a five point win over Naomh Conaill in Davy Brennan Memorial Park, Glenties, in the last game of the league.

The win will go some way to making up for last month’s county final defeat to Glenswilly. There were five points between the sides at the final whistle, but in reality the gulf between the teams was much wider.

Kilcar were much the better side for the bulk of the 60 plus minutes and only allowed Naomh Conaill back into the game late on and when they had the result all but wrapped up.

The end of the game was marred by a  couple of scuffles involving players from both sides and went on after Seamus McGonagle blew the final whistle.

Kilcar were leading 2-16 to 2-8 when the first bout of fisticuffs broke out with a little under a minute of normal time remaining.

Leo McLoone, who was only introduced for the second half due to an ankle injury, scored Naomh Conaill’s third goal on the stroke of the 60 minutes and before the second bout of fisticuffs.

Kilcar, who made two changes from county final day, laid the foundation for the win in the first half as they tore into Naomh Conaill from the off.

And it soon became clear that Martin McHugh’s men had well and truly laid the ghost of county final day and that shock one point defeat to Glenswilly.

And Sweeney most definitely made his mark. He ended the game as his team’s second highest scorer behind Patrick McBrearty. McBrearty ended with a personal tally of 0-7 while Sweeney posted 1-3, all from play.

His goal minutes from half-time propelled his team into a 2-8 to 0-4 lead after Kilcar had dominated the opening 30 minutes.

This was due in no small way to the aerial domination around midfield of Ciaran McGinley, the Kilcar captain. McGinley put on exhibition of high fielding in the first 20 minutes. And with  the movement of Patrick McBrearty, Conor Doherty, Michael Hegarty and Sweeney causing problems for the Naomh Conaill rearguard the scores had flowed for the champions.

They had five points on the board in the opening nine minutes with two from Patrick McBrearty and one each from Mark McHugh, Sweeney and Stephen McBrearty before Naomh Conaill hit their first.

But Kilcar took the first big step on the road to the title when Conor Doherty got in for their first goal.

Doherty tapped home from close range after Patrick McBrearty skipped past two defenders as he cut in along the end line before squaring to Doherty for a 1-5 to 0-1 lead.

That was on 13 minutes and Kilcar lead by six, 1-8 to 0-4, when Sweeney drove through a crowd of players to drive home goal number two for a 2-8 to 0-4 lead with just six minutes left in the half.

Aaron Thompson. Dermot 'Brick' Molloy (2) had scored the Naomh Conaill points before Eoghan McGettigan and Brendan McDyer hit late points to Sweeney's one in the closing minutes of the half for Kilcar lead of 2-9 to 0-6.

Nine up on the resumption, Kilcar were out of the blocks in a flash and reeled off four quick points from Michael Hegarty, Sweeney, Ryan McHugh and Stephen McBrearty to extend their lead out to 2-13 to 0-6 by the 38 minute mark.

And with Brick Molloy and McLoone hitting two goals in the space of three minutes and Molloy also knocking over a super point, there was a hint of a comeback, as they reduced the margin to six point , with 15 minutes remaining.

But when Patrick McBrearty kicked Kilcar's first point in 15 minutes for a 2-14 to 2-7 lead, the champions were back on track.

And they were 2-16 to 2-8 in front thanks to two late McBrearty fees before McLoone got in for Naomh Conaill’s third and face saving goal and before all hell broke out.

Leo McLoone did not start because of an ankle injury while Kilcar lost Andrew McClean to a warm-up injury.