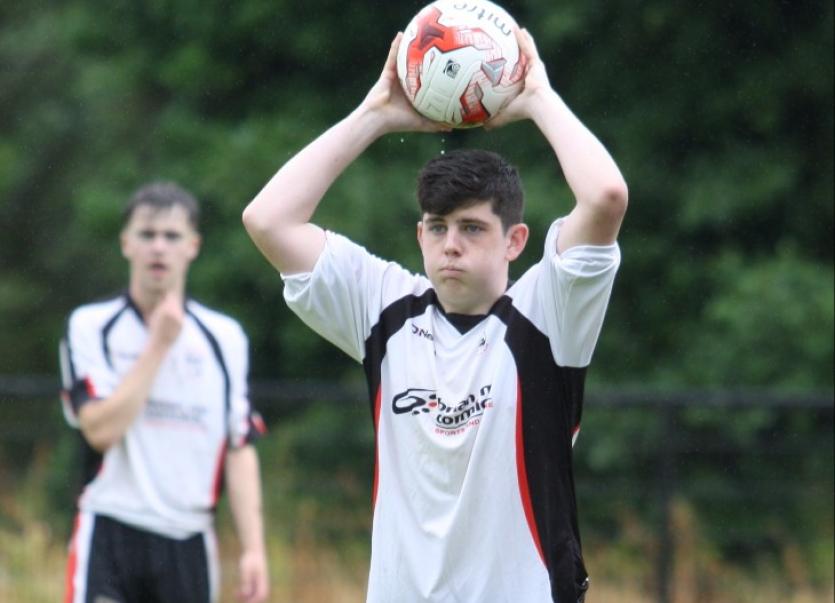 Milford United and Letterkenny Rovers advanced to the next round of the FAI Youth Cup after defeating Gweedore Celtic and Bonagee United respectively.
Darragh Greene scored both goals for Milford after going a goal down courtesy of a Dan Gallagher strike. They are joined in the next round by Letterkenny Rovers after the Leckview outfit had a 5-1 victory over neighbours Bonagee United. Rovers goals came from James Tourish, Tarlath O'Boyle, Codey Brogan, Shane Doherty and Darragh Morrison. Bonagee's consolation goal was scored by Oisin Purdy.
A full round of league games take place this Saturday along with a midweek game between Bonagee United and Gweedore Celtic.

FAI YOUTH CUP
ROVERS CRUISE INTO NEXT ROUND
Letterkenny Rovers 5
Bonagee United 1
Letterkenny Rovers have a proud history in the FAI Youth Cup and they ensured their place in the hat for the next round when clinically disposing of the challenge of near neighbours Bonagee United 5-1 at the Aura Centre on Saturday afternoon.
Rovers raced out of the block and took the lead on seven minutes when James Tourish fired home a sweet free kick on 7 minutes with a cultured left footed effort from twenty yards. Tourish went on to have a big role in proceedings and it was he who delivered a sweet corner from which Tarlach O'Boyle headed home on 12 minutes as Rovers threatened to run rampant after doubling their advantage.
O'Boyle then came close again before Bonagee netminder Peter O'Donnell was called into action to deny Tourish another with a fine save while Jerome Angel-Atahuene blasted over with a blistering effort.
Bonagee rarely threatened with the Rovers central defensive pairing of Eoghan Kelly and Ruairi Dennehy not giving up any chances lightly but they were thrown a lifeline on 37 minutes when Oisin Purdy's deflected free kick gave Eoghan Jordan no chance in the home goal.
That goal seemed to galvanise the visitors while at the same time adding some nervousness to the Rovers side approaching half time as having dominated possession but failed to convert their chances but any notions of Bonagee completing their comeback were dispelled as Anthony Gorman's men started the second half in similar vein to the opening period and extended their two-goal advantage when Codey Brogan tapped home from close range on 56 minutes after some lovely approach work from the lively O'Boyle.
Rovers made it 4-1 on the hour mark when Tourish was again the architect when his superb delivery found the head of Shane Doherty and he made no mistake.
Rovers could have extended their lead on a number of occasions through Brogan, Doherty and subs Cameron Gormley and Brandon Manues before another replacement Darragh Morrison added number 5 right at the death after a neat assist from Ciaran Daffan.
After a couple of long runs in the Cup in previous seasons Rovers are in the mood for another one this season while football was put in perspective this week in the Cathedral Town with the sad passing of Orla McNulty whose brother Sean is a part of the Bonagee squad and a minutes silence was held in her memory.
Bonagee are back in League action on Wednesday night when they host Gweedore Celtic at Dry Arch Park while Letterkenny are back in action when heading to play Fanad United on Saturday next.
Letterkenny Rovers: Eoghan Jordan; Calvin O’Brien, Eoghan Kelly, Ruairi Dennehy, James Tourish; Brian Diver, Jerome Angel-Atuahene, Shaun Curran, Tarlach O’Boyle; Codey Brogan, Shane Doherty. Subs: Ciaran Daffan for Tourish (64), Conor Lynch for O’Brien (64), Darragh Morrison for Brogan (72), Brandon Manues for Diver (77), Cameron Gormley for Angel-Atuahene (77).
Bonagee United: Peter O’Donnell; Eoin O’Donnell, Darren Coyle, Jordan Rodgers, Kyle Gormley; Adam Hannaway, Oisin Purdy, Daniel Stolarczyk, Stephen Lafferty; Matthew De Cook, Ryan Moran. Subs:Jamie Gallagher for Lafferty (45) Ronan Cullinane for Hannaway (73), Conor Logue for de Cook (73), Ronan Downey for Moran (83), Stephen McLaughlin for Stolarczyk (83).
Referee: Dessie McLaughlin.

FAI YOUTH CUP
GREENE DOUBLE SINKS CELTIC
Gweedore Celtic 1-2 Milford United
Milford United progress to the next round of the FAI Youth Cup as they came from behind to defeat Gweedore Celtic 2-1 in a highly entertaining & sporting game, which was reversed to the excellent playing surface at An Screaban. Having lost out by the odd goal in 5, in dramatic fashion a few weeks ago, Milford were determined to give a better account of themselves on this visit to the west, but playing with the benefit of a fairly strong breeze in the first half, it was the home side who took the lead after about 10 minutes through a well taken long range effort from Dan Gallagher, which caught returning Milford keeper Josh Pond flat footed. Milford settled into their passing game and an interchange between Oisin Doherty and Ryan Toye released the latter on a penetrating run which ended in a shot across the face of the goal, narrowly missing the inrushing Kieran Connor at the far post.
Further chances came & went at both ends as the first half ended with the hosts holding a slender 1-0 advantage. Milford upped the tempo early in the 2nd half and drew level after a defensive mix-up presented in-form striker Darragh Greene with an easy finish. The away team gained in confidence with the lively Jonah Serrinha providing the guile & awareness of a Wes Hoolahan and further chances were well defended by Gweedore before Darragh Greene slammed in what proved to be the winner 17 minutes into the half.
Milford defended resolutelyfor the rest of the half, through a solid centre spine of Adam Graham, Ryan Spike Flood & Niall Trearty, and as Gweedore pushed forward in search of an equaliser, Greene was played in by Toye but was denied his hat trick by a smart save from the home side’s keeper. Referee Mick Lagan, who had an excellent game in the middle, blew for full time after 5 minutes of injury time and the 2-1 scoreline saw Milford United progress to the next round of the FAI Youth Cup after an absence from the competition of over 6 years.
Best for Gweedore Celtic were Kyron Glennon, Liam Wiggins and Aidan Doohan, while Milford United produced a strong team performance.
Referee: Mick Lagan