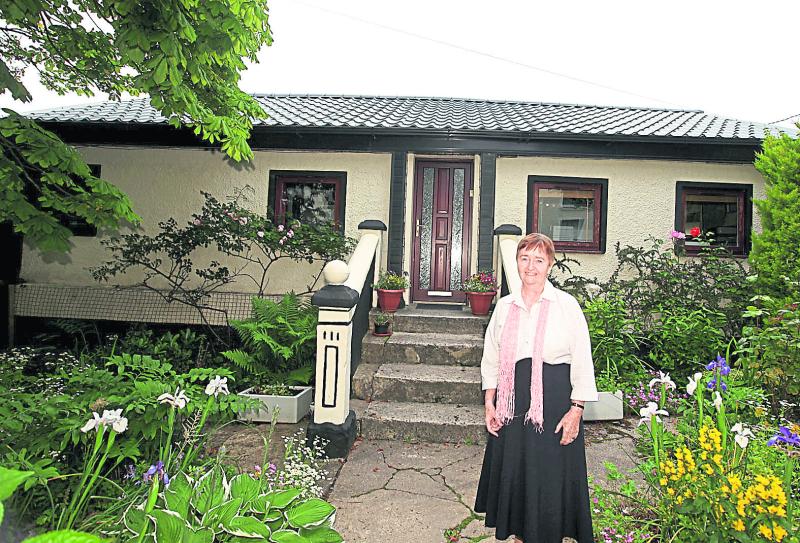 Donegal County Council is set to honour a nun from Dungloe who has spent decades helping disadvantaged children in Sierra Leone.

Sr Mary, as she's generally known, spoke extensively with the Democrat's Sue Doherty ahead of the festival, recalling how she became involved in setting up a school for hearing-impaired children in Sierra Leone, braving civil war and Ebola, and much much more.

To mark this recognition by Donegal County Council, we are delighted to re-publish that interview this week.

Sr Mary Dolores Sweeney - a lifetime of helping others

A native of Dungloe, she's no stranger to anyone from the Rosses - firstly because her family owned the famous Sweeney's Hotel, and secondly for her decades-long mission helping the disadvantaged, and especially the school she founded, St Joseph's School for the Hearing Impaired, in Sierra Leone.
She's braved civil war and Ebola over the years, and is deeply grateful for all the support she's received from everyone back home.
Sr Mary elaborates: "I am very pleased and very honoured to have been asked to open this year's festival because I really want to thank everyone here.
"Many people would have died and it would have been the end for many families were it not for the support we've received from the people of Dungloe and the Rosses."
Sr Mary's association with the festival goes back to her early days, when the very first ideas of a festival were discussed in the kitchen of her family's home, Sweeney’s Hotel. In fact, her mother, Mrs Dessie Sweeney, was one of the founders.

How the school came about
Inspired by the sisters at Mount Sackville boarding school in Dublin, Mary joined the Sisters of St Joseph of Cluny. After teaching for two years, Sr Mary made her final vows in Dungloe in 1972 and was off to Sierra Leone a few weeks afterwards.
She was sent to Makeni, a town about 114 miles north of Freetown, where the order has operated a mission, set up by two French and two Irish sisters 150 years ago.
Her first job was head teacher of a school with 800 students. After nine years, she started working with young children suffering from polio, bringing them to a Dutch charity, Terre des Hommes, in Freetown to get calipers. This led to the next development.
"I told our teachers then, if they knew any children with disabilities, to bring them into our school. I put the word out on Monday and on Wednesday they brought in 400! Among them were 8 hearing impaired children and 12 blind children. We could help the blind children and the children with polio but we weren't trained to help the hearing impaired children.
"My late uncle, Fr Derry Sweeney, had a friend, a Dominican sister in charge of the school for the deaf in Cabra, so I wrote to her. She offered me a scholarship to come and train in teaching deaf children, this was in 1979. A Peace Corps volunteers also came to us to teach sign language and set up our school for hearing impaired children. And that became my life ever since."
In 2005, the new catholic university was founded in Makeni. Sr Mary asked for a Special Needs Education programme to train teachers to work with children with all disabilities.
"We have around 67 teachers trained now," she explains. "We have 230 children at our school: 93 of them are boarders, from the age of 3 to 20. 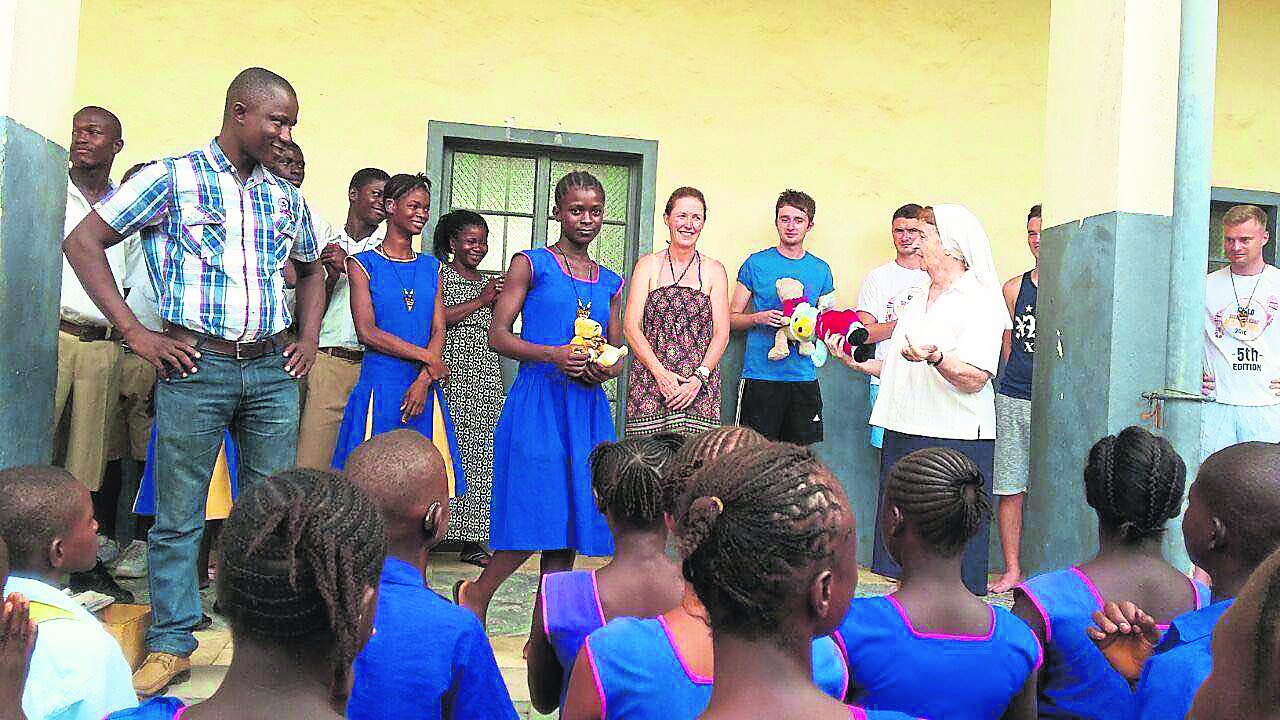 Sr Mary Dolores congratulating some of the students who took part in the Sierra Leone annual marathon held in Makeni.

"One of the problems we still have in Sierra Leone is that disability is often thought of as a curse. The children are seen as devil, and often rejected. When we started teaching them, people said we were wasting our time, that they couldn't be educated, but then they saw children doing well."
In addition to academic courses, the school teaches vocational skills such as carpentry, farming, sewing, catering and business.
None of this could have happened without the continued, generous support of the people of The Rosses and Donegal. "Right from the beginning," Sr Mary recalls, "my mother was in the kitchen and said, 'We'll have to help her, she'd building a kitchen' and everyone gave a pound.
"Any time I came home, people organised table quizzes or other fundraisers. It was what kept us going.
"I am very pleased and very honoured to have been asked to open this year's festival because I really want to thank everyone here. Many people would have died and it would have been the end for many families without the the support we've received from the people of Dungloe and the Rosses."

Civil War
The Civil War began in 1991 and worked its way northwards towards Makeni. Sr Mary and the other four members of her community stayed until 1998 when Makeni was attacked.
They left, with just the clothes on their backs, stopping for a while in Kambia, then, when rebel soldiers attacked the next town, onwards to Guinea.
"We had to leave everything. We left the doors open at our compound in Makena because we knew they would break them in.
"Myself and the sister in charge went back down to Freetown in 2000 and there was utter devastation, there had been terrible killing. A lot of our children were there and we ran a displaced school. We made trips to Makeni. The rebels had taken over all our places but the UN overcame them.
"When we came back to Makeni in 2002, everything was gone, from the roofs right down to every toilet and every wash hand basin, except for one wee table.
"There were trenches and bullet holes everywhere, three ground to air missile launchers, tanks all around the place.
"The people were so pleased that we'd come back, Christians and Muslims alike. It was a sign that things were over.
"Irish Aid, Trócaire, Goal and Sightsavers came on board and we got back on our feet fairly quickly."

Ebola
Unfortunately, this was not the end of the hard times, with the Ebola crisis hitting Sierra Leone in May, 2014 and the all-clear not declared until January of this year.
"We stayed throughout the Ebola crisis," Sr Mary recalls. "People were devastated, so many died -whole families. In one tiny village two miles up the road from us, 156 people died.
"A lot of those who survived were not getting any help. One family we lost 13 members - the father got ill and died, his son was washing clothes and got ill, the daughter was cooking and she got ill - anyone who touched anyone got ill and died.
"The father had been trying to reinforce the wall of their mud house that was collapsing because of the rain. One man from Donegal gave us €20,000 to rebuild the house for the survivors, two wives and six children. A group in England sent out Christmas shoe boxes they arrived on nearly the same day the house was ready. So there was tremendous joy for all our Ebola families."
Local women identified for the sisters those who needed the most help and the community managed to support 100 families, around 600 people in all.
"One of the things I found that really helped them was that we brought people into a big classroom and asked them if they would like to share their stories. Their stories were really horrific.
"Those suspected of having Ebola were taken away in ambulances, to the eastern side of the country and the rest of their families didn't know whether they died or survived. There were three children taken from one family, in three different ambulances, to three orphanages. The family eventually found the two girls, aged 12 and 5, but the little boy, aged 9, was never found.
"We had one girl and all her family died, She was 18. Her father and his three wives died. Ten of the children died but eight survived and she was left to look after them. Two of the little ones lost their hearing and they are at our school now."
Although all the private clinics closed during the Ebola crisis, a Loreto health clinic, run by our sisters, that looks after around 200 mothers and children daily remained open thanks to Irish Aid providing food for six months. Trócaire also provided food for six months, as well as mattresses and pots and pans, and solar torches, and solar mobiles, which enabled people to have contact with each other and start their lives again.
Once the worst of the crisis was over, the sisters encouraged families to look towards the future. They've been helping survivors and study agriculture,. Sadly, times are still very tough due to very high inflation, Sr Mary notes.
"A bag of rice, which would feed 15 of a family for a month, has gone from SLL 120,000 (€19.60) to SLL 200,000 (€32.67)."
Once again, though, the people at home responded. "I must have written about that to my sisters here and the next thing two people came forward with €100 immediately, saying 'Tell her to feed the people'. That's the kind of generosity I receive from home."

If you would like to support Sr Mary’s vital work, please contact one of her sisters, Cha Gallagher on 074 952 2135 or madelinemitchell@gmail.com