"Donegal has lost a brave warrior" 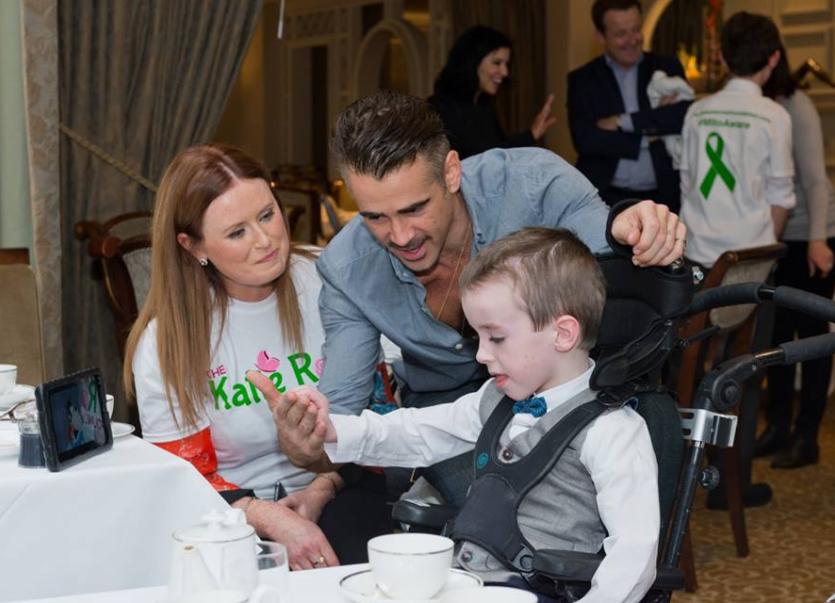 In 2015 Ashling, Colm and Órán were among the families who met actor Colin Farrell at an event for the Katie Rose Foundation.

The Donegal parents' advocacy group, Our Children's Voice, has paid tribute to Órán Nibbs of Rathdonnell, Trentagh, who passed away at home on Friday.
Órán, son of Ashling and Colm Nibbs, was 7 years old.
"Donegal has lost a brave warrior today who always had a smile on his face, as he fought the battle with Mitochondrial Disease," the advocacy group posted to social media. "It's with great sadness we say farewell to this gorgeous boy."
"Our thoughts are with his family and all who love Órán," Our Children's Voice said.
The Donegal parents in Our Children’s Voice are passionate advocates for children with life-limiting conditions or high medical/physical needs.
There is no cure for mitochondrial disease. Mitochondria are the “powerhouse” of cells, responsible for more than 90 per cent of the body’s energy and necessary to sustain life and support growth. Mitochondrial failure means that the body’s organs do not have enough energy to work.
In 2015 Ashling, Colm and Órán were among the families who met actor Colin Farrell at an event for the Katie Rose Foundation. Fiona and Sean Rodgers of Donegal set up the foundation in memory of their daughter, Katie Rose, who passed away at age 2 in December 2014 from mitochondrial disease.
Óráns remains will repose at his home from 12 noon to 8pm today, Saturday, and tomorrow, Sunday, January 22nd. The funeral Mass will be held at 11am in the Church of the Irish Martyrs, Letterkenny, with interment afterwards in Carrigans Cemetery, Maugherow, County Sligo.
Órán is survived by his parents, a brother and a sister, grandparents and extended family.